The student in front of me pulls open a heavy metal door and disappears into the room beyond. I follow her into the dark, hands outstretched. There is a small desk lamp in the corner, but its weak halo is swallowed by the darkness. I see nothing, but I smell chocolate. In the theater world, that means blood, and a lot of it. It’s the seventh week of fall quarter—a performance week for the Theater and Performance Studies (TAPS) course Staging Terror—and we’ve just entered room number two of a three-room scene.

Staging Terror, which meets on the fifth floor of the Logan Center, “explores the interplay between horror, terror, and pleasure through in-class discussions of theoretical works and the possibilities of practical creative application,” according to the syllabus. Heidi Coleman, AM’08, TAPS’s director of undergraduate studies and a senior lecturer, leads 21 students through the “paradox of the attraction to repulsion” and “the values of shock, suspense, and subtlety.” 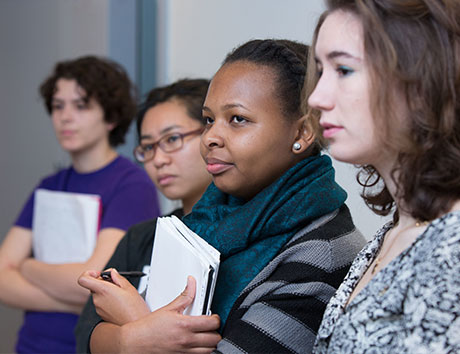 Coleman draws a crisp line between terror and horror: “Consider anticipation versus reaction, extreme anxiety versus revulsion. You feel horrified when you see something disturbing. You feel terrified when you believe you are in imminent danger.” For theatrical staging, “terror always uses time, creating a dynamic of suspense, and an anxiety for a future moment. What will come from behind the curtain?” Terror often culminates in horror. This far into the course, Coleman instructs the class to complete the trajectory in their performances, to use “horror to sometimes follow through on our threats.”

The first part of today’s scene demonstrates this culmination on a miniature scale. The class breaks into groups and Coleman, another student, and I head to the elevator, room one. We find a sheet of paper taped by the door informing the audience that “scary stuff has been happening,” which we are to investigate on the ninth and 10th floors. The notes and plot reference a first-person exploration video game discussed earlier in the course, Gone Home, in which the player becomes a character who explores an abandoned house. 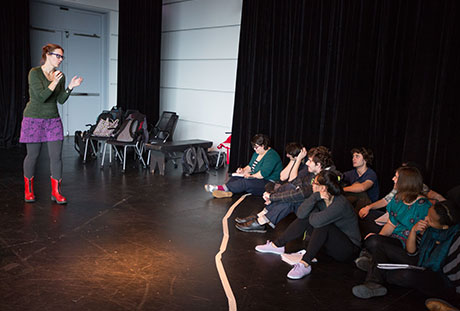 Before the doors open on the ninth floor, I joke, “I’m gonna step back,” moving to the rear of the elevator. Coleman responds, “See, you’re being trained!” She’s referring to how a scene can manipulate the audience into action. In site-specific scenes—acted in nontheater settings like this one—actors must use techniques to draw the audience’s attention without the aid of lighting or set design. In an earlier scene, actors kept looking to the sky, which led the audience to follow suit. Audience instruction is built into the narrative.

The elevator doors open, revealing: nothing. Up to the 10th floor. There the doors open, revealing an actor, her sweater pulled half off, sticks bound to her wrists, stage blood pouring from her mouth. Coleman notes that the reference is the 1999 film adaptation of Titus Andronicus, Shakespeare’s most violent play, which intensifies the horror of the character Lavinia’s rape and mutilation—her hands severed and tongue cut out—by shoving twigs into her stumps. 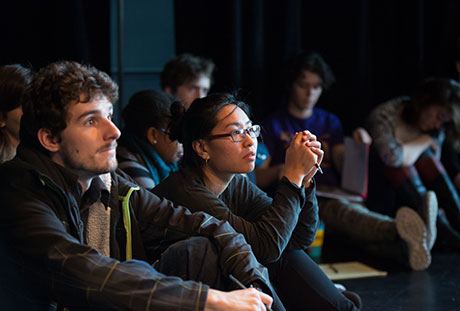 Numerous recipes for fake blood can be found online, but TAPS has a props manager, Jenny Pinson, who specializes in stage blood (as well as weaponry). Chocolate syrup, famously used in Hitchcock’s Psycho shower scene, works well for its consistency, depth of color, and edibility.

Back on the fifth floor, we come to door number two. A note taped to the door states that the narrator is confused by the spooky occurrences within, but “we just learned about this Molasses Disaster in Boston for history class. ... Hopefully I’m just imagining things.” (Last week Coleman tasked the class with finding news stories with the potential for terror staging—some recent, some older—to incorporate in the scenes; one was Boston’s deadly molasses flood in 1919.) We enter the second room, into the chocolate-scented darkness. The moment my eyes adjust, I see the actor and gasp. She sits on a chair, only inches from me, a scarf over her mouth and drenched in stage blood. 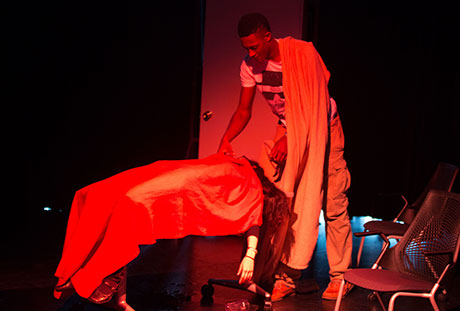 Brown chocolate syrup was fine for Hitchcock’s black-and-white film; this fake blood is dyed red, striking against the actor’s white shirt. The previous week’s discussion included analysis of color in Peter Greenaway’s highly stylized 1989 film The Cook, the Thief, His Wife, and Her Lover. Coleman notes the stark white bathroom in the film. “White is always great, and white light is always great. Why? Because we can see blood. ... Blood in the bathroom looks fantastic. Home decorating tips!”

The actor silently points to a bucket of stage blood on the floor. Later we find out that there were plants in the audience who initiated the action, pouring more stage blood over her. One student dribbles the blood on the actor’s already soggy head, pausing to ask, “Are you sure?” before dousing her again.

On the door of room three, a note references another Boston-based news story—last spring a “serial tickler” was reported breaking into students’ homes to tickle their feet while they slept. “I kept feeling this tickling sensation at my feet,” read the note. “It could’ve been a dream, but it felt so real.” Someone hidden in the dark suddenly bangs on piano keys, sending four students screaming and laughing, hands clasped over mouths. Inside, a small voice calls out, “Who’s there?” An actor lies on a piano bench, blindfolded, with a feather duster, her feet exposed for the audience to tickle. 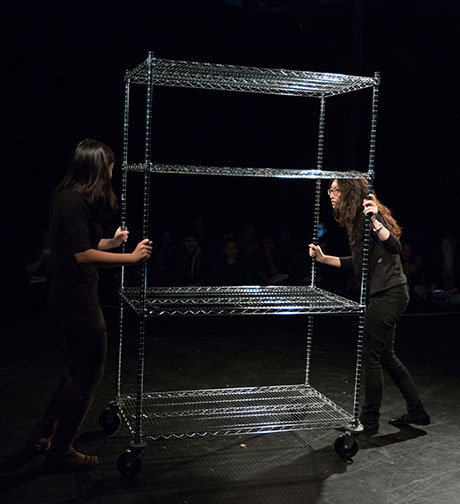 Normally the class would reconvene to discuss what they remember from the scene, what elements worked well, and how it related to previously discussed texts. But time has run out. I later ask an actor what her group’s intentions were. She explains that audience participation is key—a moving scene with no tour guide. Its success relies on the audience, how we are manipulated into action, thereby making us complicit in the terror and horror. Perhaps it’s the intimacy between the audience and the actors that makes the rooms revolting, startling, and creepy in turn.

Coleman previously discussed immersive theater, in particular a French play called Jet of Blood, part of a movement called Theatre of Cruelty. The play, written in 1925 but not performed until 1964, ends with a literal wave of stage blood washing over the audience. The playwright and founder of the movement, Antonin Artaud, likened theater to a plague; the actors infect the audience who then go out and infect others, changing the world “in an almost anarchist way.” But Coleman cautions against empty spectacle “serving nothing.” A narrative must exist to provide meaning, yet not be so “directive” as to rob the audience of personal engagement.

I ask Coleman if this scene went beyond spectacle, and she says yes, but “the scenes for the course are cumulative, in conversation with each other. Performance is an ongoing conversation, and while it’s ephemeral, it’s continual. These scenes were explorations that led to revelations manifesting in subsequent scenes. For me, the best part of working in performance is the most maddening in that you are never done, you just run out of time.”

The following week the students perform scenes, written and rehearsed outside of class. Coleman sometimes assigns elements that must appear. For Poe’s story, the students had to include a journey with three moments of surprise, two moments of revelation, one moment of discovery, at least three umbrellas, two musical instruments, and one ball.

Staging Terror fulfills the Core requirement in musical, visual, and dramatic arts, and no prior theater experience is necessary. Each time it’s been offered, more than 200 students have applied to enroll.