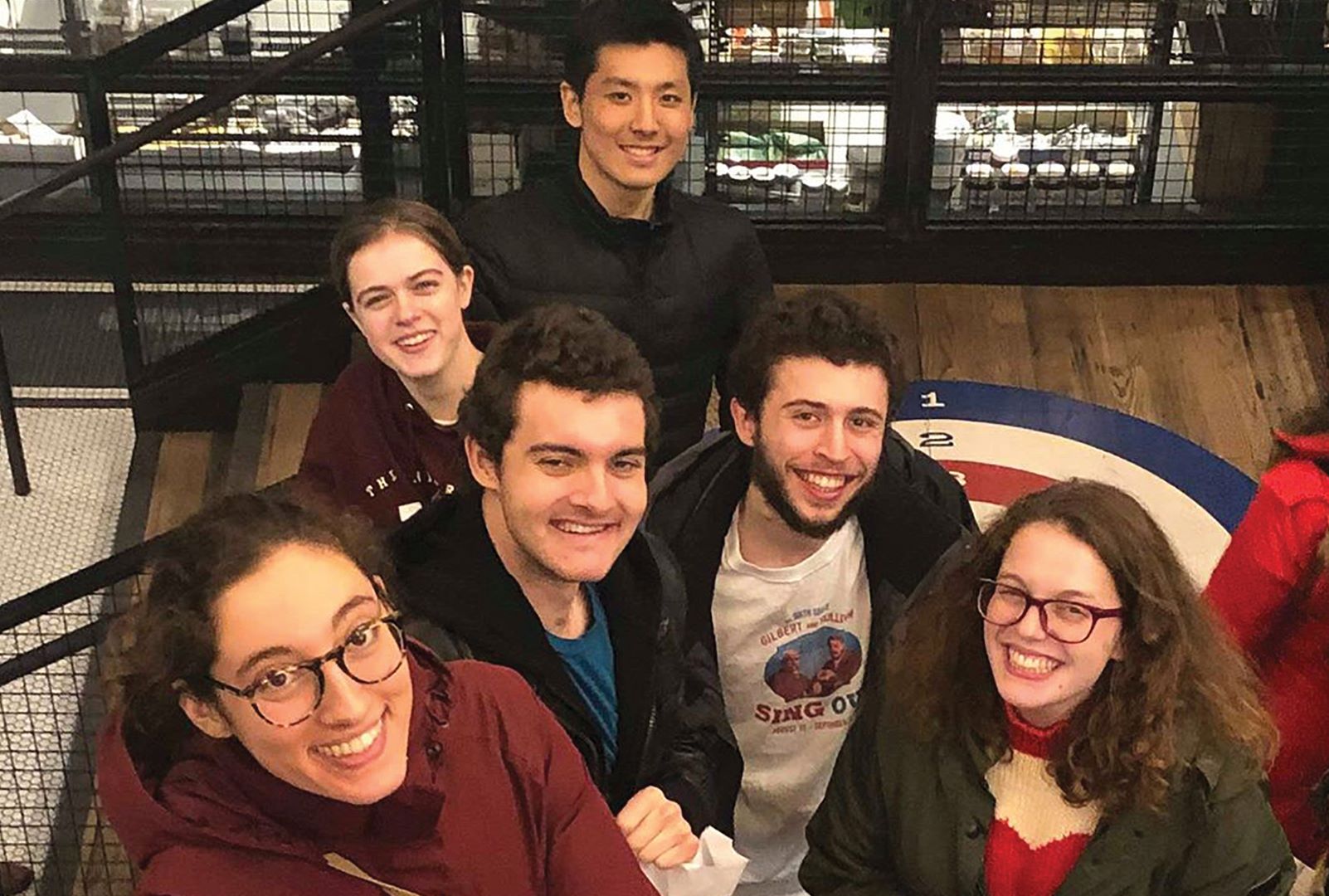 Talk Yiddish to me

Questions for a cappella group Rhythm and Jews.

This past September Rhythm and Jews (RnJ), which bills itself as “the University of Chicago’s premier Jewish a cappella group,” had its 15 seconds of fame on NPR’s quiz show Wait Wait … Don’t Tell Me!

Celebrity guest Anna Kendrick, star of the Pitch Perfect movies about collegiate a cappella singing, was given the names of four a cappella groups and challenged to identify which were real and which were fake. She correctly identified The Tempo Tantrums (Ohio University) but not The Rhythm Method (Binghamton University) before being asked about Rhythm and Jews.

Kendrick: I love that. I hope that’s real.

Peter Sagal: Yes, it is. University of Chicago represent.

This interview has been edited and adapted.

So none of you heard Peter Sagal say your name.

Cain: I’m a fan. I just happened not to be listening. The weird thing is, half-baked music puns are the mainstay of a cappella group names. We didn’t think we were all that unique.

Kitch: The group started off in the 1990s as Shircago, which is a play on the Hebrew word for song.

Cain: The founding members wanted to go be professional, so the people left behind had to come up with another name. At one point it was an exclusively Jewish group, and then it opened up.

Are most members Jewish?

Cain: Currently less than half. Last year a quarter. We’ve been calling ourselves culturally Jewish, because a lot of our music is tangentially Jewish. We do a lot of Bruno Mars, whose father is Jewish. We call him our Jewish icon.

Do the songs tend to be Jewish?

Cain: No. We’d like at least one in four songs to have a Jewish connection.

We sometimes change lyrics. One of our big hits was “Talk Yiddish,” a parody of “Talk Dirty” by Jason Derulo: “Been around the world, don’t speak the language, but your bubbe don’t need explaining.”

How are songs chosen?

Kitch: We’re pretty open. If anyone wants to arrange a song, they can arrange it or talk to Team Music about it.

Cain: Team Music being me and my assistant music director. In the past lots of people chose Disney songs. I had to put a moratorium on that.

Kitch: We take what we do very seriously, but we don’t take ourselves too seriously.

Cain: Levity is our way of combating what is increasingly called angst appella. There’s a lot of angst lately on the scene.

You perform at the Latke-Hamantash debate every year. Is there a set repertoire for that?

Cain: We want to keep it Jewish adjacent for sure.

Did you invent this word?

Kitch: We’ve been saying it a lot lately.

How hard is it to join RnJ?

Cain: Last year we had about 40 people audition. We took about 15 to 20 for callbacks. We let in four.

Friedlander: But some of the people we didn’t let in went to other a cappella groups.

Cain: The system here is a mutual matching system. The groups have their decisions, but then you also rank which groups you want to be in in order.

Kitch: I believe it’s the same one they use to place doctors at residencies.

Are there some people who try out but just can’t carry a tune?

Cain: Yeah, there are. Usually in our rejection emails we say, Get some practice with other, larger ensembles. Weirdly enough UChicago is not the place to do a cappella casually.

A cappella ensembles at UChicago

Unaccompanied Women: All-female, the oldest a cappella group on campus

Voices in Your Head: Coed, open to wider Chicago community