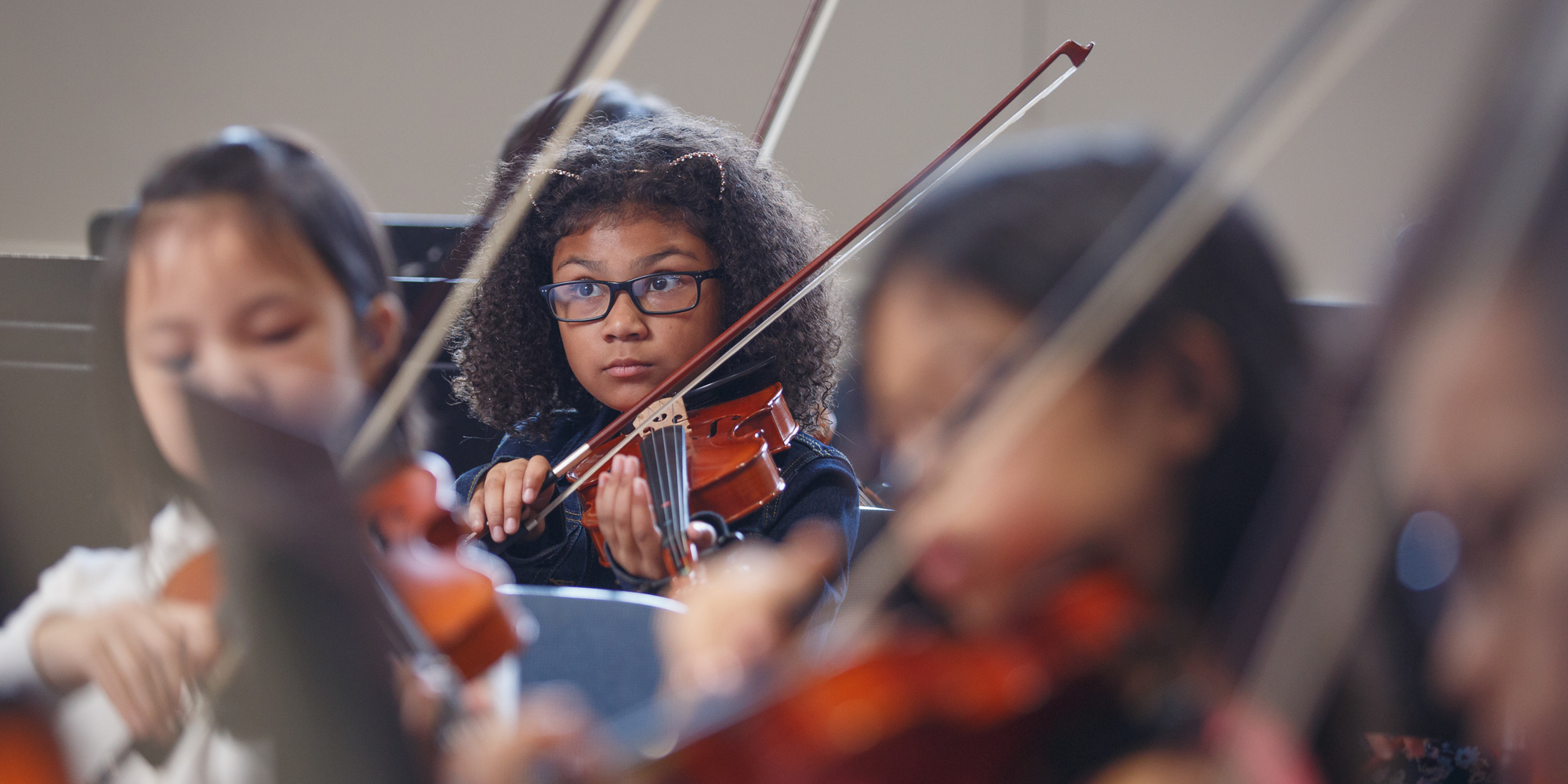 At Philadelphia’s Settlement Music School, led by Helen Eaton, AM’00, anyone can play.

By
Author
John Caroulis
|
The University of Chicago Magazine
—
Summer/18

Cecelia VonderLinden was surprised when her daughter, My Love, said she was going to audition for her public elementary school’s production of Annie—more so when My wanted to play the lead role.

“She was always shy,” recalls VonderLinden, who lives in Philadelphia, “but she memorized her lines so quickly, and got the part.”

Her daughter’s confidence grew, VonderLinden said, by participating in an after-school program devised by Helen Eaton, AM’00. My, now 11, is also a better student, says her mother, recently making her school’s honor roll for the first time with nearly all As.

Eaton, who studied music history and theory at UChicago, is CEO of Philadelphia’s Settlement Music School. Situated on a narrow street in one of Philadelphia’s oldest residential neighborhoods, just blocks from Center City, Settlement operates from the three-story red brick building where it has resided since 1917. More than 300,000 students have received music education at the school since its 1908 founding, including Albert Einstein, Chubby Checker, actor Kevin Bacon, Grammy-winning opera singer Eric Owens, and Tonight Show musician Questlove. Today the school has five branches throughout the Greater Philadelphia region and 5,000 students.

At Settlement anyone can pick up an instrument, exercise their vocal chords, or train their ear. There are programs for age groups from babies and toddlers to adults, with the bulk of them aimed at children and teens. Some are designed to address the decline of arts education in US public schools, especially in lower-income areas.

For instance, the Teacher Training Institute for the Arts targets early childhood professionals and preschool and elementary teachers who want to bring arts instruction into their classroom. And, for the past five years, Settlement has brought music lessons straight to schools though Eaton’s brainchild Music Education Pathways.

The program, in partnership with the School District of Philadelphia, provides intensive after-school band, orchestra, and choir training in eight underserved schools throughout the city, enhancing the music instruction already offered by those schools. Classes are open to all and are based on the needs of each school. “The real opportunity in our community partnerships is that we bring the teachers directly to where the students are,” says Eaton.

Playing music was Eaton’s first love and ambition. She took up the violin at age 8 before switching to viola at 16, inspired by a family friend who played the instrument for the Israel Philharmonic Orchestra.

After graduating from the University of Pennsylvania and earning a certificate in viola performance from the Juilliard School, Eaton was accepted into UChicago’s musicology program and headed west with Guillaume Combet, a violinist who is now her husband. It was in Chicago that she began warming to the idea of a career in music education, en route to full conversion.

From the time she was an applicant, Eaton was struck by the UChicago music faculty’s “holistic approach to their teaching that really embraced the natural curiosity of their students.” While still in graduate school she began teaching at the West Loop’s Merit School of Music, whose efforts focus on young people, from babies to high school seniors. There she hoped to tap into the “joy the professors at UChicago were experiencing in their teaching.”

She did. At Merit Eaton found her own joy in witnessing the opportunities afforded to young students from all economic backgrounds. She remembers walking the hallways on Saturdays, when Merit’s Alice S. Pfaelzer Tuition-Free Conservatory for the most accomplished young musicians was in session. “I felt the excitement of the students to be there, students from all over the city coming together, playing side by side.” She taught at Merit for five years before moving to the school’s administration with the aspiration that “one day I could play a part in making a difference in families’ lives.”

From Merit Eaton moved to the Chicago Children’s Choir, where she was president and executive director for almost three years before being named Settlement’s CEO in 2010. In that position she’s focused on suffusing music education across the greater Philly community, working on the school’s own turf and around the city, with partners such as social service agencies, libraries, and retirement homes.

Eaton’s work is hardly done. Settlement recently received grants from the Andrew W. Mellon Foundation and Pew Center for Arts and Heritage that are shaping its future ambitions. The Mellon grant, with Settlement as the lead partner for 10 institutions including the Philadelphia Orchestra and the Temple University Music Preparatory Division, will support the pursuit of greater diversity in classical music through identifying and nurturing young musicians, while the Pew grant will help Settlement’s faculty members develop new teaching methods and curricula for 21st-century music students.

Under Eaton’s watch Settlement’s work is expanding in many directions. “It’s all about equitable access,” she says, “and the critical role the arts play in creating opportunity.”