Will Cuppy: An interview

The humorist and literary critic reminiscences about his College days and writing his first book, Maroon Tales.

Will Cuppy, AB 1907, AM 1914, enjoys the distinction of having written the first book of fiction about the University of Chicago—Maroon Tales, a collection of short stories about campus life published in 1909.

Since that time scores of authors have written novels and short stories involving University of Chicago students and faculty. There are Robert Herrick’s novel, Chimes, Teddy Linn’s This Was Life and Wind’s Over the Campus, Zo Flannigan’s Grey Towers, Walter Blair’s Candidate for Murder, numerous short stories and novels by James T. Farrell, and many other books.

But Cuppy wrote the first one.

Born in 1884, at Auburn, Indiana, Cuppy now lives quietly in lower Manhattan, writes a weekly column on murder mysteries for the New York Herald Tribune book section, and occasionally turns out a magazine article or book of essays that rank with the best of Leacock, Benchley, and Thurber.

“Come clean,” I insisted, “tell me about Maroon Tales.”

Cuppy settled back in his chair and grinned.

“Yes, I wrote the book,” he said finally. “I wrote it because a man asked me to. He was a Mr. Forbes, I think, for the publishers were Forbes and Company. So I just sat down and wrote one tale after another, and you must admit they’re pretty awful. I have a copy but I can’t bring myself to look at it. I go all cold and creepy and embarrassed.”

Cuppy is a modest, unpretentious fellow.

“You see,” he went on, “I had been writing University news for the local papers ever since I was a freshman, so this man came up to me and asked me to write a book of University of Chicago stories. I did. But first I bought up all the college stories I could find and read them and tried to write as much like all of them as possible. I remember one of the books was by Jesse Lynch Williams—Princeton stories. At that time I couldn’t even write and had only written some required themes. I never thought of becoming an author.

“I hate to tell you the rest, but as God is my judge it is true. When I got the proofs of the book I was highly dissatisfied with the whole thing. The prose looked so simple, so utterly simple-not in the least like a book. So I took the proofs and a dictionary over to Tackson Park and sat on a bench by a Japanese pagoda and changed most of the small words to big words, thus utterly ruining what small sense the stuff may have had.

“In the original draft,” he continued, “the wordage came nearer having a style of some kind, good or bad. I remember that Dave Robertson (AB 1902), an English instructor, read the manuscript and said he liked it, though I recall his sayirig that of course I would have to go over it very thoroughly and correct the great number of flagrant errors, such as typographical errors and such. This left me rather sad because the manuscript was already as perfect as I could make it. Dave said there were so many of those things that he hadn’t attempted to do it himself. He just left it to me.

“I never profitted much from the book because the changes I had made on the proofs necessitated resetting practically the entire book and cost me nearly three hundred dollars. That was all right with me because I thought it was a small price to pay for perfection.

“Another horrible thought occurs to me. I remember that the publisher told me he had circularized the entire University of Chicago faculty and student body in an attempt to sell the book. He said he hadn’t sold enough to pay for the stamps.

“Well, Professor Starr liked the book, anyway, and I remember getting nice fan letters from Dr. Goodspeed and Mrs. Judson.”

“What about your later books,” I asked, “those two Cuppy classics, How to be a Hermit, and How to Tell your Friends from the Apes? Ever have any trouble with style when you wrote them?”

“As a matter of fact,” Cuppy answered, “after the experience with Maroon Tales I wrote a Master’s thesis on style. I took graduate courses for years because I was living in the Phi Gamma Delta house and writing for the papers and I liked it all. I was going to be a PhD and was working on my Master’s thesis when a friend invited me to New York. So I turned in my thesis for a Master’s in 1914 and left Chicago. Maybe I would never have been a PhD anyhow because I hadn’t yet taken the required Old High Middle Lithuanian and I don’t believe I could ever have passed that.” 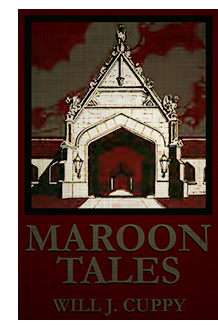 After some coaxing, I persuaded Cuppy to let me look through a folder of clippings of newspaper reviews of Maroon Tales.

It read: “The cover design on Will J. Cuppy’s Maroon Tales has unexpected value as a symbol. It shows a gateway, a path leading to a second gateway beyond; and beyond the second gateway, nothing whatever. Mr. Cuppy’s book takes the reader into the University of Chicago in much the same manner. It lets him see some of the things that can be seen from the outside quite as well; certain other things like the second gateway that are concerned with the mere outer aspects of that seat of learning—and then nothing beyond. It is in no way remarkable.”

“That last sentence is a dirty lie,” said Cuppy, reading over my shoulder. “Here, read this review from the Daily Maroon—I wrote it myself.”