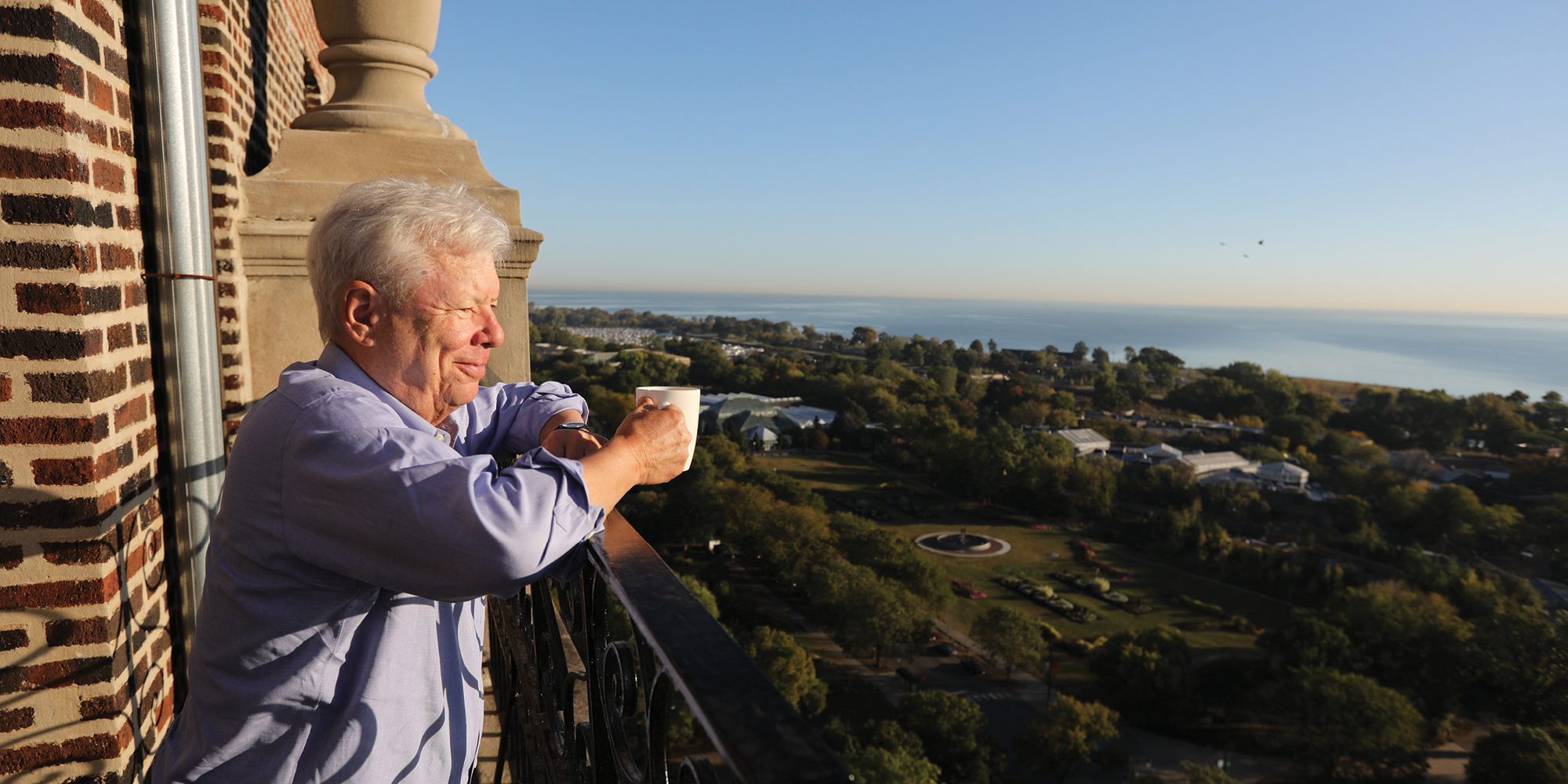 On a hectic and life-changing morning, Nobel laureate Richard Thaler took a moment to soak it all in. (Photography by Anne Ryan)

How economist Richard Thaler nudged his way to a Nobel.

Speaking at the Nobel Banquet in Stockholm on December 10, Richard Thaler could not help comparing himself to his fellow laureates. “Their discoveries of colliding black holes, genes that know the time of day, and images of biomolecules using cryoelectron microscopy are rather daunting,” he said in a speech the evening after accepting the Sveriges Riksbank Prize in Economic Sciences in Memory of Alfred Nobel.

“So what did I do to get up here?” said Thaler, the Charles R. Walgreen Distinguished Service Professor of Behavioral Science and Economics at the University of Chicago Booth School of Business. “I discovered the presence of human life in a place not far, far away, where my fellow economists thought it did not exist: the economy.

Over the past four decades, Thaler’s research has upturned the assumption that economic actors are entirely selfish and perfectly rational. Sometimes they are, well, human: idiosyncratic, overconfident, prone to procrastination. The field of behavioral economics, of which Thaler has been called the father, investigates how that humanness shapes our economic choices—and how to harness it in positive ways.

For instance, Thaler challenges the classical economic notion that money is fungible—that is, that one dollar is the same as any other dollar. His work on mental accounting, one of the areas of research highlighted by the Royal Swedish Academy of Sciences in its Nobel citation, shows that, in practice, people don’t treat money this way. Instead, they mentally earmark money for specific purposes, such as housing, food, and travel, and make financial decisions based on how those choices will affect each fund. “Money in one mental account is not a perfect substitute for money in another account,” Thaler wrote in a 1999 paper.

This idea, and others like it, are accepted by many economists today. But it took time for Thaler to make the case to his colleagues. Behavioral economics was “really out in the wilderness 40 years ago,” he reflected on October 9, just hours after learning he had received the Nobel Prize. It made the award all the more meaningful. “It’s been a long journey,” he said, “so I’m happy about that.”

The call had come at 4 a.m. on his cell phone. The incoming number was from Sweden, so “I had a pretty good idea what that might be,” he said. He’s now among 90 scholars associated with the University to receive Nobel Prizes, and 29 who have received the Nobel Memorial Prize in Economics.

“Richard’s original, broadly influential, and paradigm-defining work has richly earned this recognition,” president Robert J. Zimmer wrote in an October 9 email to the UChicago community. “We look forward to celebrating Richard’s work and his place in the distinguished legacy of eminent economics research at the University of Chicago.”

Thaler is perhaps best known for his books Misbehaving: The Making of Behavioral Economics (Norton, 2015) and Nudge: Improving Decisions about Health, Wealth, and Happiness (Yale University Press, 2008). In Misbehaving, he traces the rise of behavioral economics in the 1970s and the struggle to bring the field of economics back down to earth.

Nudge, coauthored with Harvard Law School professor Cass R. Sunstein, explores how the concepts of behavioral economics can be used to tackle many of society’s major problems and influence public policy. Inspired by the research, the government of the United Kingdom established a Behavioral Insight Team, or “nudge unit.” The team’s goal is to use the insights of behavioral economics to make public services more cost effective and easier to access and to help people make better choices for themselves. Thaler served as an adviser to the team in 2010.

At the heart of Nudge is what Thaler calls his “mantra”: “If you want to get people to do something, make it easy.” For example, employers can nudge employees by automatically enrolling them in a retirement savings plan rather than requiring them to opt in; schools can nudge kids toward healthy food choices by putting fruit at eye level in the cafeteria.

Thaler returned to the idea in his Nobel Banquet speech. “Around the world, governments and NGOs are working with behavioral scientists to design and test scientifically informed policies that are working. People are being helped to save more for retirement, more poor kids—especially girls—are going to school, peasant farmers are retrieving more reliable harvests, and we’re all being successfully nudged to use less energy.”

He urged the audience to continue that work: “Nudge for good. … Nudge for the greatest benefit of mankind.”