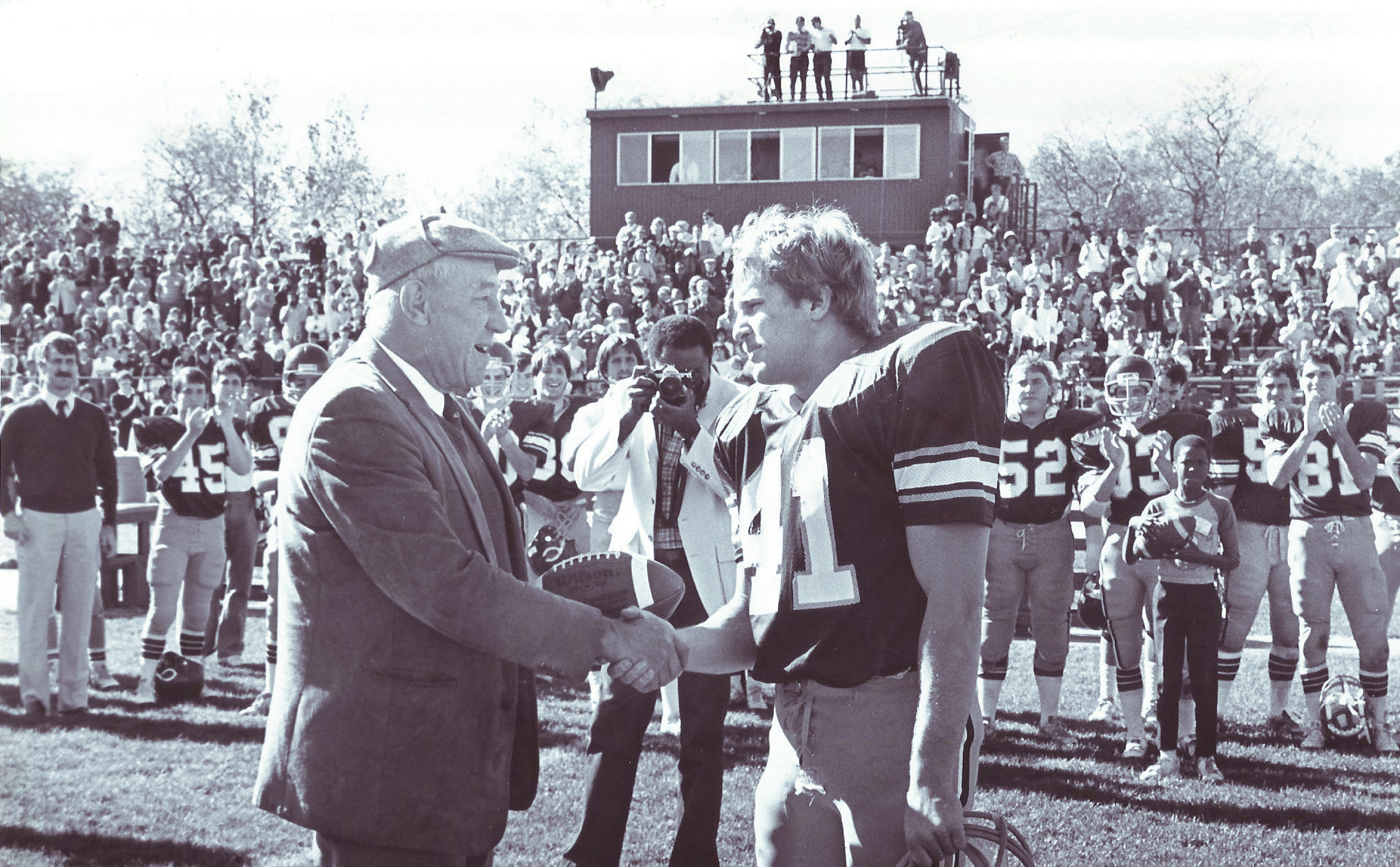 The right way to run a college athletics program

Early in September 1985, our son’s first year at the College, my wife, Judy Munson, AB’66 (Class of 1963), and I found ourselves traveling downstate to Galesburg, Illinois, on a cold and rainy Saturday. We arrived just in time to watch him and his football teammates finish their warm-ups for a game against Knox College. (The University of Chicago resumed intercollegiate football in 1969 and has grown into a program with 93 young men in uniform last season.)

The field at Knox nestles within grassy slopes. The rain was running down to the field and leaving puddles of water and mud on the playing surface, perfect conditions for the Maroons’ star running back, Bruce Montella, AB’86, MD’90. While the Knox defenders were sliding and falling in the mud, Bruce pounded through them for big yardage.

I grew up in a family with season tickets to the Chicago Bears. I saw Gale Sayers at Wrigley Field and Walter Payton at Soldier Field. Neither Sayers nor Payton ever achieved what Montella achieved that day. There is no official record of the number of times he carried the ball, but my recollection is that he ran at least 25 times and maybe more. It is official that he ran for a total of 305 yards. That’s an incredible 12 or more yards per carry. It was a historic performance that put Montella in a group of University football greats that includes Jay Berwanger, AB’36, a running back who won the first-ever Heisman Trophy in 1935.

A week after Montella’s performance at Knox, we joined other football parents for the lunch hosted by the director of athletics, at the time Mary Jean Mulvaney, before each home game. A crowd was gathered around Montella’s parents. “Isn’t that nice,” I thought. “They’re congratulating the Montellas on the awards and recognition Bruce received after the Knox game.” These honors included, for instance, Sports Illustrated College Player of the Week.

I walked over to offer my own congratulations. To my surprise, the other parents were not talking about the Knox game. They were congratulating the Montellas on Bruce’s early admission to the University’s Pritzker School of Medicine.

The breathtaking performance on the field and the admission to medical school demonstrate what a college athletics program ought to be. The University’s program is part of what is known as Division III in the nomenclature of the National Collegiate Athletic Association (NCAA), the governing body of college sports. Within Division III, there are 443 schools offering intercollegiate competition in 25 sports. The students who compete engage in a pursuit of excellence in academics, teamwork, discipline, perseverance, and leadership.

At the other end of the spectrum is Division I, in which large universities stage massive spectacles for public entertainment. Within Division I, 130 schools play big-time football and 353 schools compete in men’s basketball. These two Division I intercollegiate sports have become a major American industry that produces billions of dollars in revenue each year. There is nothing like it in any other culture.

It is increasingly difficult to see any connection between these Division I extravaganzas and the objectives of higher education. The driving force in Division I is money—money in the form of television contracts, corporate sponsorships, ticket revenue, skyboxes, shoe contracts, sideline apparel contracts, naming rights, and other deals and gimmicks designed to increase revenue.

The income from these two sports has produced salaries for coaches and administrators that can be incomprehensible. Top coaches are paid as much as $10 million per year. A contract with a manufacturer to wear its apparel in televised games can produce additional hundreds of thousands of dollars each season. There are now at least 20 assistant football coaches who are paid more than $1 million per year, two or three times the salary of their schools’ presidents.

In addition to the Brobdingnagian coaches’ salaries, the schools are investing huge sums in workout facilities, dormitories, and other amenities for the athletes. The phrase “arms race” is frequently used to describe the rush to build these palaces. Attempting to justify such expenditures, some suggest that the income from Division I sports supports the school’s academic efforts. But economists who have studied the budgets of these universities have concluded that only 20 of the schools produce athletics income that could be used elsewhere in the university. The others struggle to break even on athletics; many of them suffer losses and must be subsidized by student fees and other budgetary maneuvers.

The outsized revenues prompt many to ask why some of the money cannot be paid to the athletes who produce the income. It’s a good question. The NCAA insists that its athletes must remain “amateurs” to preserve the wholesome image of college sports and to continue to draw the vast TV audiences that these games enjoy.

Players and former players have tried to use American antitrust laws to obtain a share of the money. They have a strong argument. The NCAA is clearly a monopoly (as the only game in town, it’s actually a monopsony), and its rules against payment are an obvious restraint of trade. But the players have been rebuffed in two major court decisions.

The US Supreme Court had a chance to address the issue a few years ago. Although the matter involves hundreds of colleges and universities, thousands of athletes, and millions of fans, the court inexplicably declined to accept the issue for consideration.

The student-athletes of our university and all Division III schools do not receive athletic scholarships, although they may be the beneficiaries of grants based on academic merit or need. Their training, practice, and performance are a proportional part of their lives on campus. If there is a conflict between a class and a team practice, the Division III athlete goes to class. That is often not the case for football and basketball players at Division I powerhouse schools.

UChicago athletes go to class, and they graduate. Bruce Montella’s big day at Knox College was an indication of what was to come as the University began to attract student-athletes in multiple sports. Under the leadership of director of athletics and recreation Erin McDermott, the University has become one of the nation’s most successful Division III athletic programs.

The NCAA maintains standings for the 449 schools competing in Division III. The University’s success in its 20 sports has put it in the top 20 for the past six years, and it is now ranked ninth among all schools for 2018–19.

For the past 16 years, I have served as the master of ceremonies at the annual induction ceremony for the University of Chicago Athletics Hall of Fame. Each year we award this honor to several highly successful former student-athletes. The achievements of these elite athletes in competition are remarkable, but what they have done after graduation is equally impressive.

Our son, Lester Munson III, AB’89, for example, played left tackle for four years on the offensive line. With his political science degree, he went to Washington and worked on Capitol Hill for 25 years, concluding his career as staff director to the Senate Foreign Relations Committee. He is now a principal in BGR, the lobbying firm founded by Haley Barbour, the former governor of Mississippi and longtime chair of the Republican National Committee.

What is it about competing in Division III sports that puts the student-athletes of the University on a pathway to success? For four years, they practice, they train, and they compete at a demanding level while succeeding in one of the most challenging academic programs anywhere. They show up, they work, they help others on their teams, and they learn leadership. Along the way, they wake up one morning and discover that they have become educated men and women, ready for citizenship in full.

In short, they demonstrate what a college athletics program can and should be.

Journalist Lester Munson, JD’67, has served as a senior editor at ESPN.com and Sports Illustrated. He lives in Chicago.