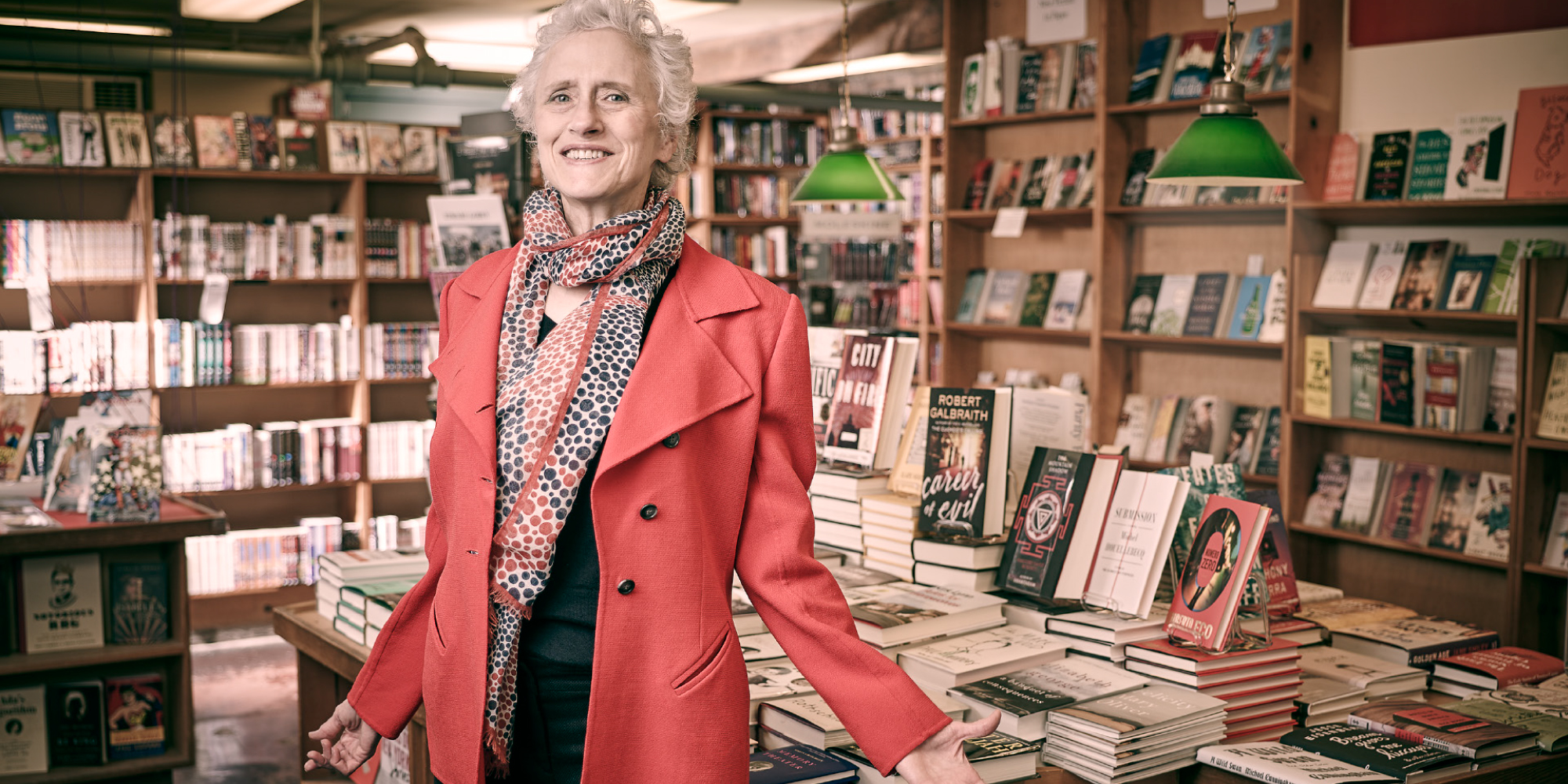 Paretsky and her husband, S. Courtenay Wright, are “both very proud of the caliber of scholarship” at UChicago, she says, and “want to see it continue, especially as more pressure is building societally against intellectual endeavors.” (Photography by Jeff Sciortino)

By
Author
Sharla Stewart
|
The University of Chicago Magazine
—
Winter/18

Crime writer Sara Paretsky, AM’69, MBA’77, PhD’77, has certain qualities in common with her hard-boiled protagonist, private investigator V. I. Warshawski: both are outspoken, no-nonsense second-wave feminists and Chicagoans. Paretsky, a longtime Hyde Parker, keeps a sharp eye on politics and their social effects, and her 19 Warshawski novels reflect that attention, often delving into issues of economic stratification in her hometown.

From the appearance of her first Warshawski novel, Indemnity Only (Dial Press, 1982)—written, she says, with a Philip Marlowe mystery open on her lap—Paretsky has helped make space in the marketplace for women crime writers and female detectives. Fallout (HarperCollins), the latest installment in the series, was published last April. In 2016 the University of Chicago Press published Paretsky’s 1977 history dissertation, Words, Works, and Ways of Knowing: The Breakdown of Moral Philosophy in New England before the Civil War. In her introduction to that work and in her memoir Writing in an Age of Silence (Verso, 2007), Paretsky writes candidly about her experiences of sexism as a graduate student. Her conversation with the Magazine has been condensed and edited.

How has the development and gentrification of Chicago shaped your stories?

It’s a much softer city in some ways than it was when I first moved here. I came here as a volunteer in the civil rights movement, and the summer of ’66 was a summer of extreme violence in the city.

But it’s a city with worse problems also, in a way. The mills, which used to be such a good place to work, are gone. You could make a really good wage in the mills. In South Chicago, where I have V. I. growing up, employment stands at about 45 percent. It’s out of the main sight of the city, but there’s a lot of gang violence. We’ve resigned ourselves to intractable problems.

Closed steel mills and early American moral philosophy—what is it about the crime genre that allows for this mix of influences?

Crime fiction is the place in literature where law and justice in society come together. So if you’re passionate about those issues, as I am, it’s the natural place to want to read and write. When I want to write about what’s really on my mind, it’s the best form for it.

You write about obstacles for women crime writers, but you’ve made it into the crime canon: Best American Mystery Stories of the Century (Houghton Mifflin, 2000).

Oh, do you think?

You’re alongside William Faulkner, Willa Cather, and Joyce Carol Oates. That doesn’t feel like a canon?

I think that keeping women’s voices alive is kind of like growing a delicate flower in Chicago: it’s very chancy.

I gave a talk last year for the Sherlock Holmes Society, and one of my hobbyhorses is a mystery writer named Anna Katharine Green who predated Arthur Conan Doyle by about 10 years. He read her work over and over as he was trying to find his voice and his way of presenting a “consulting detective” to the world. Green grew up in Brooklyn. Her father was a criminal defense laywer, so she knew a lot about that world from conversations in the family parlor. But I’m betting this is the first time you’ve heard her name. She was a top seller for decades. She was Woodrow Wilson’s favorite popular writer. But she’s gone. You think you’re in the canon but …

So I have no idea whether my works will survive. I hope they do, but there’s no guarantee.

The aging diva. I can hardly stand it.

I do think that I have a recognized role in the mystery field as someone helping open doors for younger women—younger writers in general, regardless of sex, creed, race, or place of national origin. It cheers me up. The Mystery Writers of America three years ago asked me to serve as president because they were grappling with issues of diversity. Mystery writing continues to be a very white field, not as much as it was 30 years ago, but it’s still mostly white, hetero writers. They felt I was someone who had both the guts and enough people listening to me to start opening more doors and raising consciousness among publishers.

I didn’t get that much done in my tenure as president, but I did start changing the dialogue.

The requisite dinner party question: whom would you invite? Include someone from the University, please.

I would love to have a physicist named Willie Zachariasen. The physics department had been a very hierarchical, kind of autocratic place through the ’30s and ’40s. He was an important physicist and a huge believer in equality. When he became chair he opened up that department so that graduate students and young postdocs all got to go to the seminars and exchange ideas and so on.

Where the [Quad Club] bar is now, they used to have six pool tables. Mr. Zachariasen came up with a game called cowboy pool, which is half luck and half skill, so even in pool it was more equality. Anyone could play and have a possibility of doing well. My husband [professor emeritus of physics S. Courtenay Wright] was one of the players, recruited to the pool room when he arrived in 1949. At its peak they would have 15 or 20 people—I have to say they were all men—and it was always physics heavy, but they were from every department. Some of it was just boys teasing each other, but a lot of times interdisciplinary talk started, and so it was exciting intellectually to just be there. So I would want Mr. Zachariasen at my dinner party, and some of my favorite people from the pool room, including Nick Rudall [professor emeritus of classics and former artistic director of Court Theatre].

I’d really like to have Sappho come around. Nick Rudall told me that she wrote a poem in which she said she had seen the goddess Aphrodite descend from the heavens in a chariot drawn by sparrows. And I think she must really have seen it, because if you were just imagining it, it would have been eagles or swans. So I want to ask her about that.

There’s a book that I enjoy dipping into called The Pillow Book of Sei Shonagon, a Japanese woman from the 12th century. One of the things I love about it is she’ll make lists—seven things that a lover should do when he presents himself in the night, 12 things I dislike in a particular kind of person. Sometimes that’s how I keep my journal, so I would invite her.

Where do you place UChicago in your history?

I have such mixed feelings about it, because I think it’s such an extraordinary school. So despite the fact that I feel really cranky about the way the history department behaved toward me or some of the other women students, I have a split mind about the University as a whole. I was a student here when Edward Levi, LAB’28, PhB’32, JD’35, was president. He ran a series of seminars on the future of the University with department chairs, deans, and a student representative from each of the departments. The history students elected me to be their representative to these seminars. It was an education to listen to him conduct those meetings and to think about the long-range future of the school and what the values were.

During the Vietnam War, Mr. Levi took a very strong stand against student protesters. At the same time he was such a fierce defender of the school and the privacy of students and faculty. The IRS threatened to take away the University’s tax-exempt status unless the library would turn over the names of any students checking out what they considered “seditious” material. He told them to do it if they dared.

It’s a school with a lot of history of courage on really important points about speech. That very much counterweighs, to me, my own personal experience or that of other women that I know. Yes, try to reform what’s wrong, but protect what’s really important and valuable.

Sharla Stewart is a writer in Chicago and a former associate editor of the Magazine.