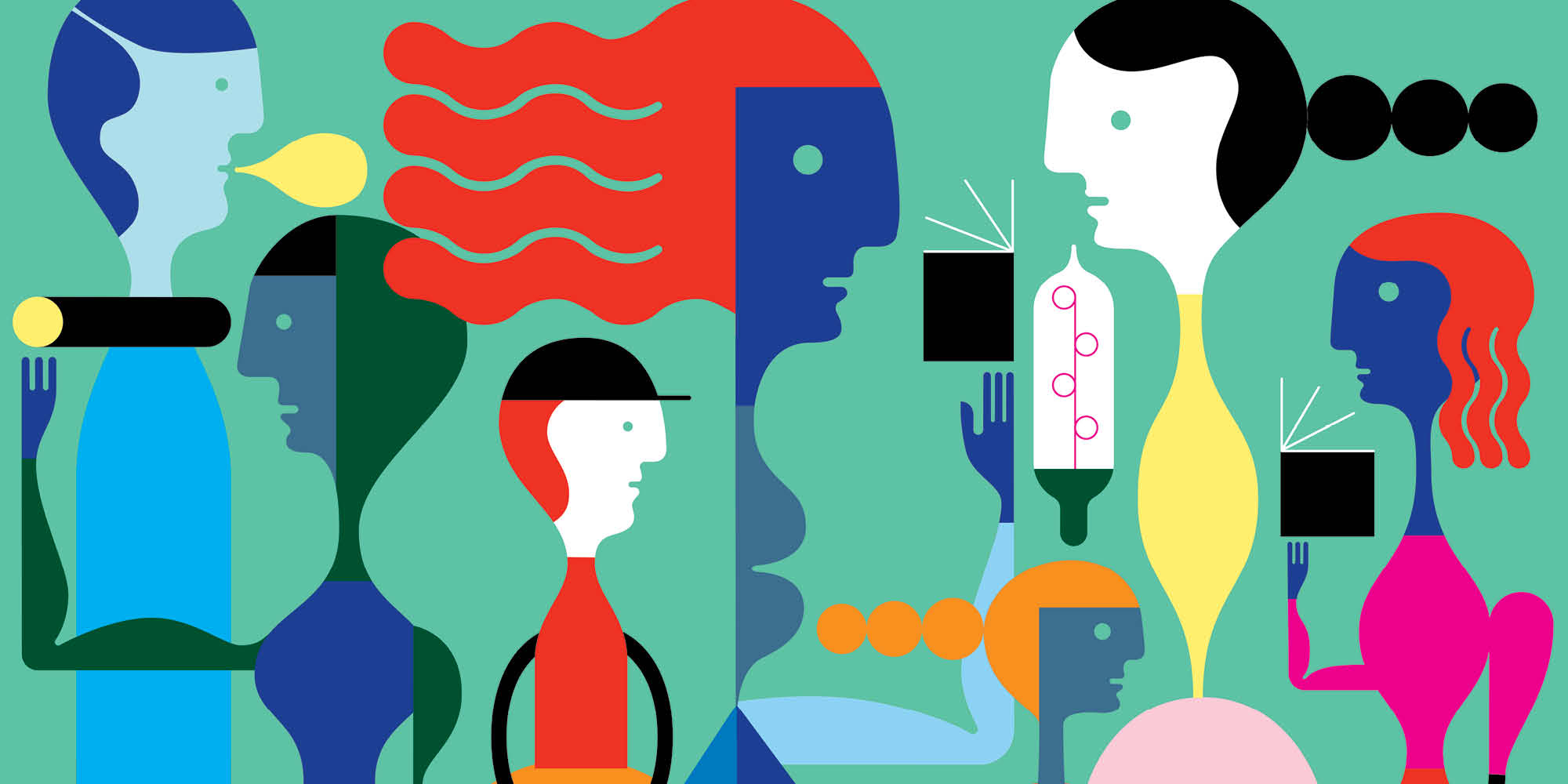 As a child growing up in South Dakota, Leila Brammer suffered from a speech impediment and social anxiety. When she mustered the courage to sign up for debate in high school—“because thatʼs what smart people did”—she could only talk “for 45 seconds” before needing to sit down. She pressed on and continued with debate in college, becoming an assistant coach and tournament judge.

Building on 21 years of experience as a communications professor at Gustavus Adolphus College in St. Peter, Minnesota, Brammer is the inaugural director of the Collegeʼs Parrhesia Program for Public Discourse. Named for an ancient Greek term meaning “to speak freely and openly,” the program aims to foster “vigorous, inclusive, and productive public discourse” through its undergraduate curriculum, live events, and support for principles of free expression. The program offered its first class and first event—a talk on combating hate speech without censorship—in Winter Quarter 2019.

The following interview has been edited and condensed.

How did your early struggles with speaking in public inform your teaching?

It gave me a perspective about how discursive space is not level. In the public sphere on a given issue, certain people have more access to discursive space and others have less. Iʼm always thinking about how we level that. How do we make sure we get all the voices into a class discussion?

As faculty, we have often honored the person who is quick, who fills a void, who says the first thing that comes to mind. That doesnʼt necessarily mean itʼs the best thinking. But that person sets the agenda. Other students who are taking a beat to think more deeply maybe donʼt get their agenda on the table.

Iʼm thinking of a student at my previous institution, for example. Everybody thought he was just a dumb jock. He sat in the back with a hat on and didnʼt say anything. Oh my gosh, he was one of the most brilliant students Iʼve ever worked with. And it just took somebody to read his first paper and ask, How do I get you into the discussion?

What methods do you use to encourage broad participation?

Many, many techniques. Slow down discussion. Open space for those who wish to think more before responding. Set a standard that thoughtful is the value rather than being quick.

Pair-share before large group discussion. Write before discussing. Prompt students prior to class about discussion themes. Ask, Who hasnʼt spoken and has something they want to share? Use prompts that do not have a “right” answer but require working with others to develop an argument for a position.

For individual students, talk with them about their barriers to class discussion. Then work with them to create a plan to get their voice into the room. I often will have reticent students write down three things they found interesting about the reading and send them to me before class. Then I can ask a question and call on them.

For students who do not share and are writing really insightful papers, I will email them that I would like to bring up an insight that they had in class. Once students are able to get into class discussion, they are more likely to find their way in by themselves.

As a whole, Iʼm clear that discussion is something we do together and establish norms of listening to everyone—ensuring that everyone is included, heard, and challenged.

Tell me about Parrhesiaʼs events and outreach work.

Live programming was stymied last year by the pandemic. Next year, programming will involve a regular live lecture series—at least one a quarter—bringing people in to talk about various aspects of free expression. Iʼd like to have one talk a year about free expression as an international human rights issue. And ideally with every lecture series, weʼd have a conversation series that would continue after it.

Iʼve also been doing a lot of presentations to high school students, high school faculty and staff, and college faculty and staff about the principles of discourse and how to embed them in the curriculum and campus life. Thatʼs all building up to something thatʼs been on hold: a Parrhesia signature summer program that includes precollege students.

Your book Excluded from Suffrage History (Greenwood Press, 2000) focuses on 19th-century feminist Matilda Joslyn Gage. What drew you to studying her life and work?

Iʼve always been fascinated by people who are on the margins, yet find a way to get their ideas into the mainstream. How do people get their seemingly radical or threatening ideas heard?

Matilda Joslyn Gage was a central figure in the early womanʼs suffrage movement. Here was a person who had some of the most advanced, far-reaching ideas. In the later years of her life she was marginalized from the movement that she helped found. It moved away from big principles. The movement decided to start compromising with some who made the argument that women should have the right to vote because it would make a more moral country. For Gage, the biggest principle was that women are human beings. And because of that theyʼre citizens. And because of that, they deserve the right to vote.

Iʼm interested in those types of tensions. We see them play out in lots of social movements.

You helped develop an award-winning public discourse curriculum as chair of your department at Gustavus Adolphus College. Is that similar to your curriculum at UChicago?

It looks a lot like the course Iʼm teaching here.

Iʼve always been dissatisfied with the teaching of public speaking. We were teaching a formula. It was not developing voice, and it wasnʼt getting students to speak out in the world. Rhetoric is so intertwined with civic life. When you separate it out, thatʼs when it becomes empty and vacuous.

After I became department chair, we threw out the old curriculum and rebuilt it from the ground up. Every single student goes into the community to advocate for something. We made it a course in rhetoric, argument, and civic life.

We live in an increasingly hyperpartisan world. How do you counter that?

In community conversations or classroom conversations, I try to get away from the either/or. When we get a third piece in there, or a fourth way of seeing things, the discourse changes.

Both sides of that partisan divide go to automatic arguments. Theyʼre no longer responding to the other side in any way. Instead, the goal is to find some flaw in the opposing argument or make an ad hominem attack. Anything other than think, What does that idea mean? What are the values behind it? Why would somebody want to pursue that? What are the alternatives? Where can we find common ground?

For me, itʼs about creating frameworks and conversations that are not either/or, that provide opportunities for different ideas to be at the table so we can capitalize on the creativity of discourse.

How do you help someone not react in a defensive way when theyʼre trying to protect a view they strongly identify with?

In the classroom, when weʼre discussing a charged issue, I like to do some stakes gathering: Whatʼs your stake in this? I have students think through why they hold the views they do and present that to the class. All of a sudden, I know where youʼre coming from, and I know why youʼre so invested in your position.

Sometimes thatʼs when the breakthrough moment comes. It gets us away from Rock ʼEm Sock ʼEm Robots or the Green Bay Packers versus the Chicago Bears. As a Bears fan, I should be able to appreciate Aaron Rodgers, right? That guyʼs a good quarterback. Iʼm glad heʼs in the stadium today, because heʼs going to test my team.

The Chicago Principles have been an inspiration for many different universities. Do you imagine other schools might adopt something like the Parrhesia Program?

Oh, I would hope so. We have lost an ability to talk across differences and test ideas. The University of Chicago is a great place to figure this out.

The two-sided debate with winners and losers—a zero-sum game—doesnʼt lead to our best thinking. Weʼve got to bring in different voices and perspectives.

Youʼve tied public discourse to the health of democracy. What do you mean by democracy?

I am very much with [Laboratory Schools founder] John Dewey on this. Democracy is a way of life. It is a civic daily practice. It is in the daily interactions and how we live. It is the ways in which we connect with others and gain and learn different perspectives. And for me, thatʼs why rhetoric is so important. I think voting is the lowest hanging fruit of democracy—itʼs necessary but absolutely not sufficient.