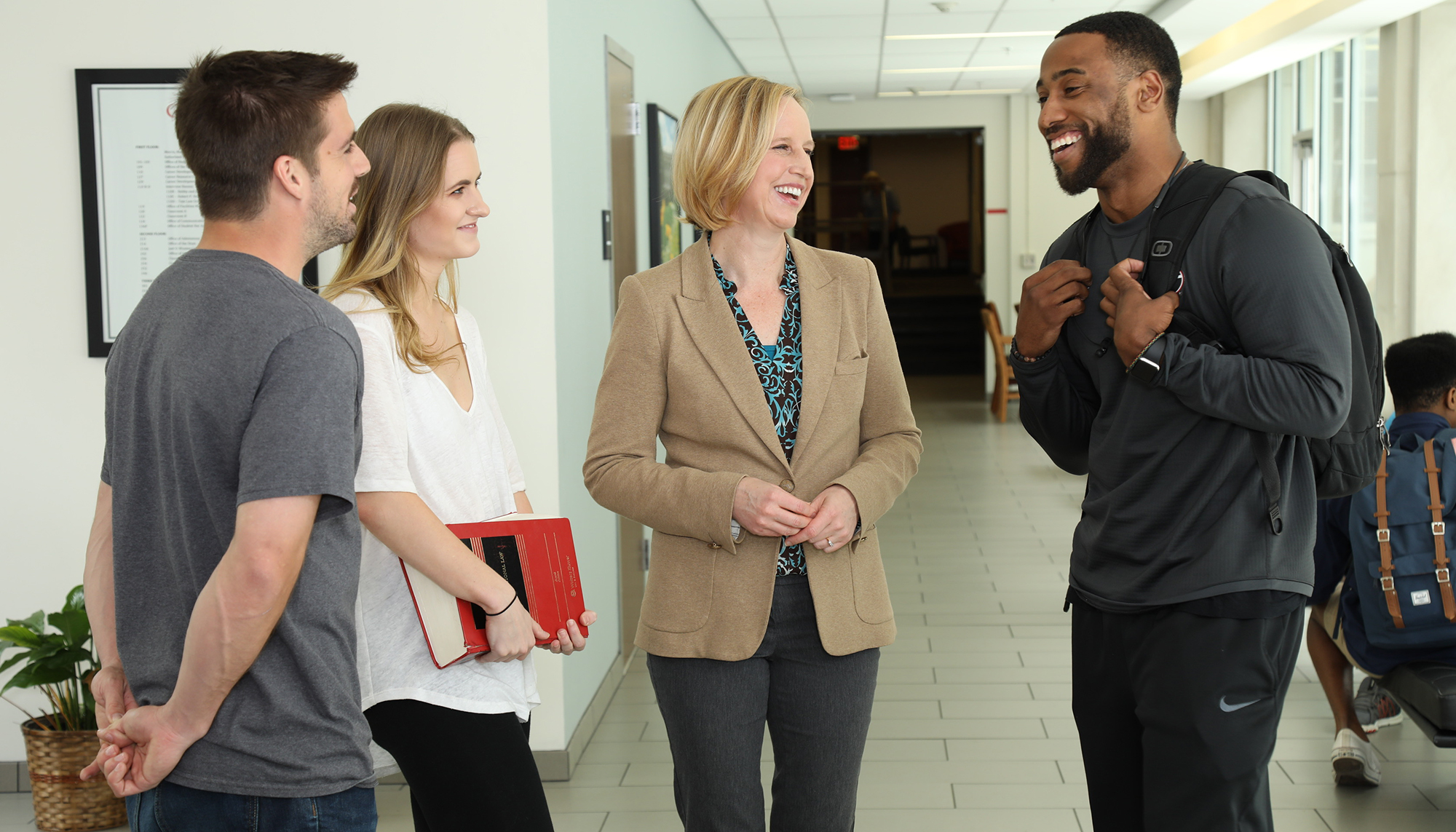 A journalist earlier in her career, West (second from right) went to law school because she wanted to be an advocate for the media. She then practied media law before becoming a professor. (Photography by Ian McFarlane/Courtesy University of Georgia School of Law)

Before law school, Sonja R. West, JD’98, spent a few years as a reporter in Illinois, Iowa, and Washington, DC. “I got to see some legal issues come up at newspapers where I worked, and I was always really fascinated by them,” she says. “The idea formed in my head that rather than doing the reporting, I might like defending the reporters.”

West is now the Otis Brumby Distinguished Professor in First Amendment Law at the University of Georgia, where she specializes in constitutional law, media law, and the US Supreme Court. In her academic work, she has argued for better protection for high school journalists and autobiographical writers, and for greater transparency at the Supreme Court. In addition to her publications in law journals, West writes regularly for Slate and the Huffington Post.

West spoke to the Magazine about the First Amendment and how it’s being interpreted today. Her comments have been condensed and edited.

I was a high school journalist at an interesting time. The Supreme Court decided a key student press case, Hazelwood v. Kuhlmeier, in 1988. I became editor in chief of my high school newspaper in 1989.

In Hazelwood the court said that school administrators or officials could censor student speech—and in particular that case was focused on a student newspaper—for what were very broadly described pedagogical reasons. I had to start having regular meetings with our administrators, where I told them what was going to be in the newspaper. What it meant to suddenly have to answer to a government official had a big impact on me. It put a tiny seed in my head of what the law could mean for journalists and why it was important.

In my work I have tried to make one central point: the First Amendment of the Constitution not only protects our freedom of speech but also our freedom of the press.

What we’ve had from the Supreme Court is all this focus on speech. We have wonderfully robust speech rights and they apply to everyone. What the court has been reluctant to do, and has not done, is recognize unique press rights or protections as constitutional rights. My overall argument is that our press clause is not being given the power that I believe it should have, that the framers of the Constitution meant.

In “Student Press Exceptionalism” [Education Law & Policy Review, 2015] my argument is that when students are engaging in journalism—when they are exercising press rights, acting as the press, and fulfilling press functions—another layer of protection comes in.

Student journalism fills a hole that mainstream traditional media are not necessarily able to fill. They cover unique issues about their school, issues that affect students in particular. It’s important work. We should recognize them not just as students exercising speech rights, but as student journalists exercising press rights.

In the ’60s, ’70s, and even into the ’80s, there was a period when the Supreme Court loved the press. The justices would speak frequently about how important the press was —they’re the watchdogs of government, they inform the people, they fulfill this vital role in our democracy.

I miss having a daily deadline. It’s a great relief to file a story and go home. In academic work there’s no deadline. It’s done when you decide it’s done. Then you submit to the journals, and even then it’s not really done, because you keep changing it in the edits.

I absolutely resist the idea that legal writing has to be boring and dry. If there is a colorful way to make a point, or an analogy I can make, I have no problem making that at all. When I’m working with students when they’re trying to write a paper, often one of the first things I’ll say to them is, “What’s your lead?” You need to catch the reader’s attention, give us the pithy explanation of where this paper is going. That’s just good writing.

They don’t have cameras in the Supreme Court, and you never get to see oral arguments. That’s obviously an important issue, and they have shown absolutely no inclination to change.

We are living in very interesting times. Much of our constitutional democracy is not based on what we call hard law. Often there is not a black-and-white written-down law or constitutional provision that is exactly on point.

The government functions through a great deal of soft law: norms and customs that have supported our constitutional structure and have been followed by presidents and the administration in general. What we are seeing from the Trump administration is the setting aside of customs and norms. He has not as yet used any hard law to go after journalists.

Obviously lots of other presidents have disliked the press—Nixon is a great example. But there was still this basic understanding that reporters were there to do a job. We’ve never had a president of the United States openly declare, in his words, a war on the media, or call them “the enemy of the American people.” Those are very strong words. And these constant refrains of “fake news” are an attempt to undermine the legitimacy of the press as a whole.

As these norms and traditions are falling away, we’re seeing more of a need for the Constitution to step in.

My focus is on free speech and free press. But the First Amendment also protects our freedom of religion, freedom to assemble and petition our government, and a number of other things. There is a lot of confusion about what exactly these rights entail. People think we have more rights than we do.

First of all, only the government can violate our free speech rights or our free press rights. They have to do something that regulates and censors us. If a private person tries to do this to you, even if you feel very cornered, it’s not a free speech issue.

You have a right to speak in a lot of situations, but you don’t have a right for there not to be consequences for that speech. When a business gets boycotted, that’s not a freedom of speech issue. That is us having a debate.

I really loved the University of Chicago Law School. I was a big, big fan of professor Beth Garrett [later the first woman president of Cornell University; she died in 2016 at age 52]. I had her for civil procedure as a 1L, and I thought she was so fantastic that I took every class that I could take with her. I think I took tax from her. I mean, I’m not a tax person.

Obama was there—he was a state legislator—and I didn’t take his class. It’s one of my biggest regrets ever. I don’t know what I took instead. What was I thinking?