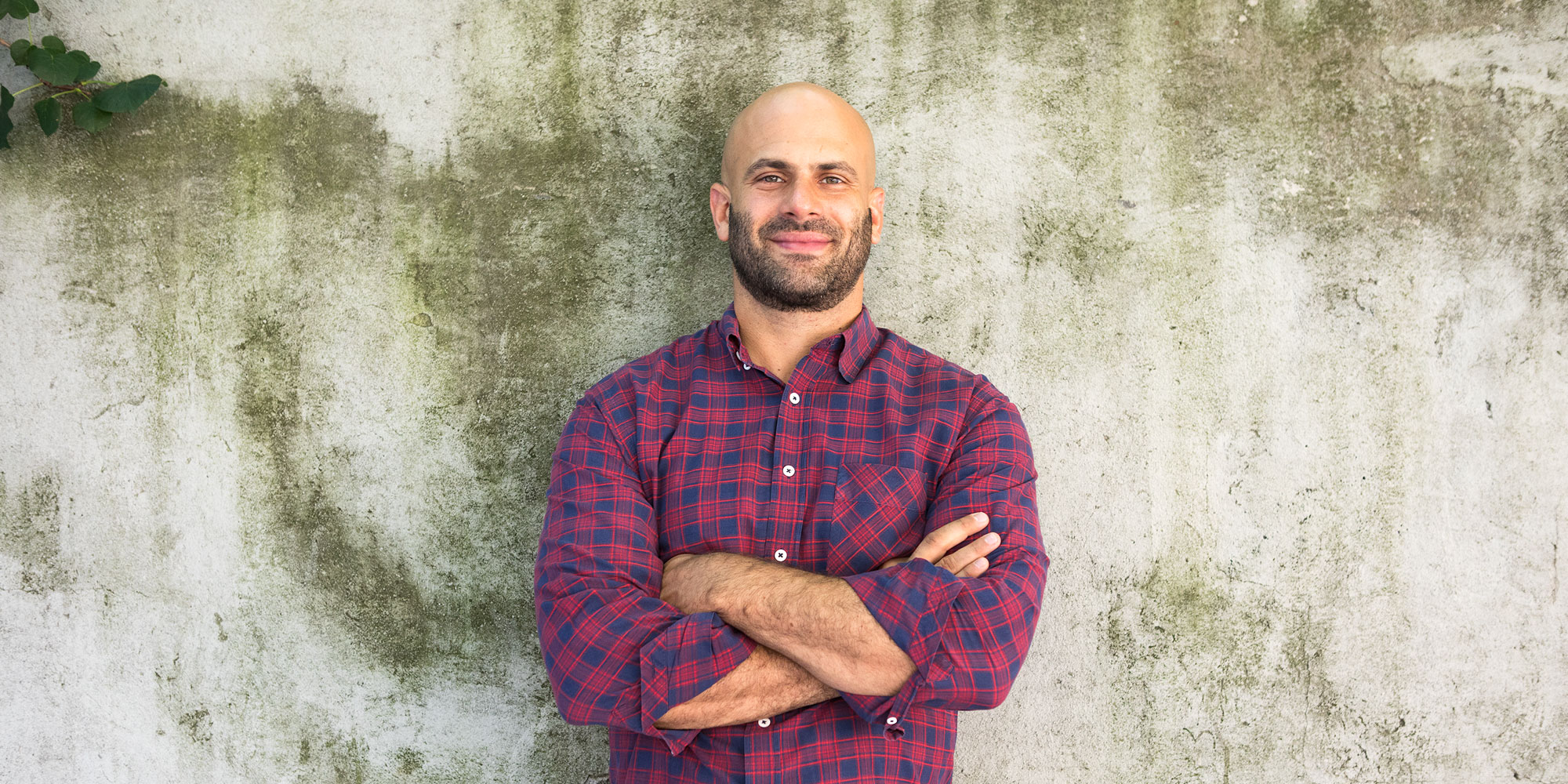 “What the University really honed was a way to think,” Kass says. “It’s only with those tools that I could have gone from the kitchen to writing food policy.” (Photography by Aliza Eliazarov)

The Secret Service hates it when you run in the White House.” So begins Sam Kass’s Eat a Little Better (Clarkson Potter, 2018)—not your typical cookbook opening.

But Kass, LAB’98, AB’04, would know, having served at 1600 Pennsylvania Avenue from 2009 to 2014. Following years of restaurant work, he became the Obama family’s personal chef while Barack Obama was campaigning for president. After the 2009 inauguration, Kass continued cooking for the first family while also taking on the jobs of senior policy advisor for nutrition and executive director of Michelle Obama’s Let’s Move public health campaign.

The experience transformed Kass’s career, broadening his focus from the food on a plate to the food on our planet. On a global scale, he is a partner in Acre, a venture capital fund launched by Campbell Soup to invest in health-focused food start-ups, while his strategy firm Trove provides consulting to companies looking to lessen their negative impact on the environment and human health.

Eat a Little Better, published this spring, aims to do the same thing for what’s on your plate at home, creating a lower-pressure path to healthier eating, with recipes using everything from veggies to red meat and flexible cooking techniques. It also has tips on how to organize your kitchen, pantry, and refrigerator in ways that encourage better choices—for instance, getting your produce out of the crisper and putting it on an eye-level shelf where it will be the first thing you see when you open the door.

The Magazine talked to Kass about his UChicago education, carving out a life in food, the book, and his own food loves. This interview has been edited and condensed.

What was it like growing up in the University neighborhood?

Hyde Park is one of the most diverse communities that I’ve ever known—diverse in all kinds of ways. It has the intellect, it’s the anchor of the University, it has different races and economic classes. And so it provides a pretty dynamic environment for kids to grow up in. I’ve maintained lifelong friends from the time I was a little kid, which I’ve come to find is actually quite rare. I remember playing baseball for Hyde Park- Kenwood, going to the Point. It’s just a great place to grow up.

You transferred to the College from a community college where you’d enrolled for baseball. What was it like coming back?

I went to the Laboratory Schools and my aunt and uncle [Amy Kass, AB’62, and Leon Kass, LAB’54, SB’58, MD’62] were on the UChicago faculty. So I had a pretty decent sense of what the University was like. But it was a bit of a shock when the coach told me that we don’t practice on Thursdays because that’s science lab day. I hadn’t really been used to that. And the caliber of the students took some getting used to. But I think it’s the single best decision I ever made, besides marrying my wife.

What told me that [the College] had really done its job was that I felt like I was prepared to go to college when I graduated—I was sort of wishing that I could do it again, now that I’d been given the skills of thinking and writing in the way that I had.

Your culinary career traces back to a quarter studying abroad in Vienna. How did that happen?

I had one quarter left and enough credits because of my transfer. I applied to all three of the abroad programs, and I got waitlisted for all of them. I ended up marching into the office of the dean of the study abroad program and got into a heated discussion with him.

I knew how badly I wanted to get out and see the world. I knew that I was going to make the most of the experience, maybe more than students who had better grades than me, and probably stronger applications.

So, long story short, a few weeks later I got accepted into the Vienna program. And on my third day there I got connected to the sous chef of a Vienna restaurant, who ended up giving me all my training and teaching me everything I know.

I had worked one summer in a restaurant in Chicago while I was in college, so I said to the head of the program, I’m interested in food, maybe I could get into a pastry shop once a week just to learn about it. She came back and said something like, “My husband’s uncle’s friend from college’s son rides bicycles with the sous chef of the best restaurant in Vienna. If you’re interested, he’d be willing to meet with you.”

If it weren’t for that completely random and lucky moment, none of this stuff would have happened.

What was the best part about being the White House chef?

I don’t even know how to pick. It was great. I was cooking for the most important family in the world. I was also doing policy work, like the Let’s Move campaign. It was the greatest time I had in my life, and the best job in the world. Working with the First Lady, growing the garden—everything was spectacular.

If you could build US food policy from the ground up, what would you do first?

I would invest $10 billion in research. We are dramatically underinvested in this area. And I would work to align our policy toward human health and environmental health. Right now we have agricultural policy on one hand and health policy on the other. They’re not aligned, and we’re not growing food based on what’s best for people—and we’re definitely not taking into consideration the impact on the environment and the role of climate change when it comes to crafting our policy. Globally, food agriculture is the number two driver of greenhouse gas emissions and within the next few decades will be number one. So we’re going to have to take some much more aggressive steps.

Your book puts forth the idea of eating a little better, making small changes that add up. How does that work?

A lot of the voices on better eating espouse utopic ideals of how we’re supposed to eat and frame it as, there’s a right way and a wrong way. It just doesn’t fit with people’s daily lives. People try to reach these ideals, then they fail, then they get discouraged, then they stop trying. If we want people to actually make changes, it has to be done in a way that fits their reality. So the book tries to focus on and celebrate progress more than ideals.

What experts say is good for us and bad for us seems to change a lot. How should people navigate conflicting studies on eating and health?

My advice would be, don’t listen to it. Just try to focus on eating mostly plants, fruits, vegetables, whole grains, some nice lean protein. And on not eating too much. We can’t just react to the latest study because you’re going to go back and forth like a ping-pong ball. Keep it simple. Part of the trick is not to get too obsessed with food either. Take a deep breath and relax a little bit. It’s going to be OK. Let’s just make some progress and build from there. That’s the approach.

Can you share a few key tips from the book for starting to make that progress?

Make sure your house is set up with the things you’re trying to eat and not a bunch of the things you’re not. What you have in the house and where you position it has a big influence on what you end up consuming. And try to cook one more time a week than you already do.

I’ll quickly make myself an omelet. I know that sounds like a whole thing, but it really takes me like 30 seconds. Actually it’s a quick challenge because making a perfect omelet is not an easy thing. Sometimes I’ll have a little salmon with it and a cup of coffee with half-and-half.

You’re a realist about how people eat, so what’s your own favorite guilty food pleasure?

I can’t say no to a buffalo wing, and I’m pretty much down for ice cream no matter what.

From Eat a Little Better

I wish I could say I came up with the idea of swapping out the romaine in the classic Caesar, because there’s a reason you now see kale and brussels sprouts coated in creamy, bright, anchovy-spiked dressing at restaurants from Brooklyn to Boise. These vegetables deliver flavor instead of just crunch, not to mention more nutrition. I particularly like to use brussels sprouts, thinly sliced so they grab on tight to that I-want-to-eat-this-forever dressing. Baby spinach leaves, very thinly sliced kale, or a crunchy combination of thinly sliced celery and radishes are also great to use here instead of the sprouts.