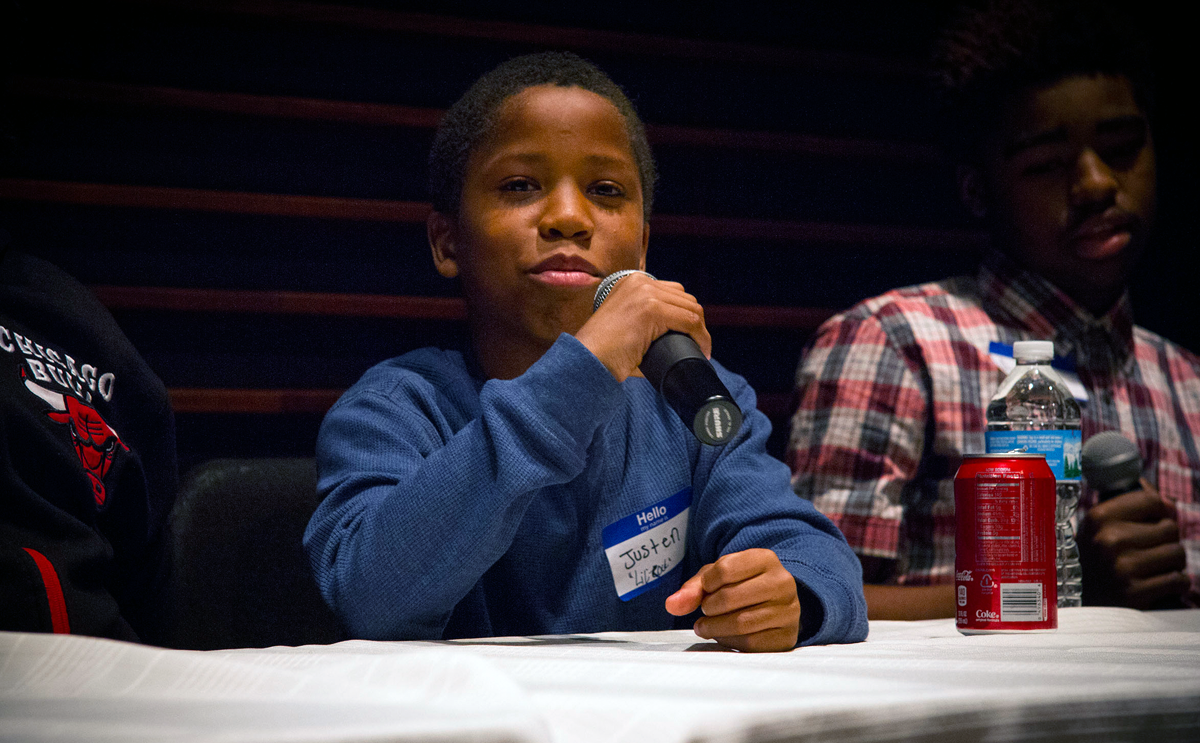 At Story Squad programs, students from the South Side share their experiences. (Photo courtesy Youth Safety and Violence Prevention program)

An antiviolence program helps South Side youth navigate the trauma that surrounds them.

Local teens were just arriving at the South Chicago YMCA for their weekly activities with the Youth Safety and Violence Prevention program this past December when a man shot in the legs staggered into the building. None of the teens were involved in the drive-by shooting that injured the 23-year-old man, but the shock of witnessing such incidents can create cycles of violence.

“There’s a saying that ‘hurt people, hurt people,’” explains Ryan Lugalia-Hollon, AB’04, a codirector of the YSVP program. “If you can help somebody process the trauma of violence, then you’ve changed their future.”

Driven by the belief that “healing is prevention,” Lugalia-Hollon and codirector Eddie Bocanegra, a master’s student in the School of Social Service Administration, have helped transform the way the Chicago Y addresses youth violence. When they took the helm as the first permanent directors of the newly created YSVP program in 2013, they recruited kids from juvenile justice programs, housing projects, and schools on the South and West Sides, targeting kids on probation or involved in gangs. The students learn how to talk about their trauma through initiatives such as the Story Squad and to address conflict in peace and healing circles. They receive guidance from Iraq and Afghanistan war veterans in the Urban Warriors mentoring program.

Over the past two years, Bocanegra and Lugalia-Hollon have doubled the YSVP staff. They’ve received support from sources like the MacArthur Foundation and Chicago’s Department of Family and Support Services, led by Evelyn Diaz, AM’98. Thanks to the increased funding, they’re now able to serve 359 teens in six neighborhoods across Chicago.

Part of Bocanegra and Lugalia-Hollon’s progress with the program can be attributed to their own experiences with violence and poverty in Chicago. As a UChicago undergraduate, Lugalia-Hollon started a group connecting students to the Hyde Park and Woodlawn communities and served as the first social justice coordinator at the University Community Service Center. He received the University’s Perry Herst Prize honoring students who put their academic work to use in social service.

After graduating, Lugalia-Hollon served as a fellow at the Adler School’s Institute of Public Safety and Social Justice before meeting Bocanegra in 2012. The men worked together to organize a conference about immigration and incarceration and grew to respect each other’s leadership styles and values. They also recognized that they had complementary skills, with Bocanegra specializing in program development and Lugalia-Hollon excelling at research and theoretical frameworks. So when the YMCA approached them later to lead their youth violence program, Bocanegra and Lugalia-Hollon knew that they wanted to work together.

“We do this work because we believe there’s an untapped resource in underprivileged youth,” Bocanegra says. “The trajectory of these kids is being changed right in front of us. They’re now thinking about college, about MBAs, about becoming journalists.”

Bocanegra experienced such a transformation himself as a young man growing up in Chicago’s Little Village neighborhood. He joined a gang at age 14. Four years later two of his friends were shot, one paralyzed. Bocanegra took to the streets for revenge and ended up killing another young man. After serving a 14-year prison sentence, he emerged with the mission of stopping youth violence. He became a “violence interrupter” for the organization CeaseFire and founded Grupo Consuelo, a therapeutic group for parents who have lost children to violence.

After earning much recognition as a peace builder—he was featured in the 2011 documentary The Interrupters and former Illinois governor Pat Quinn gave him a Hero Award—Bocanegra received a Laurence Lynn Fellowship to study at the School of Social Service Administration with a focus on violence prevention. He says that his coursework at the SSA changed the way he looks at violence.

“I now think about violence prevention from an ecological perspective,” he says. “I learned how early exposure to trauma really shapes the way an individual thinks and the different ways communities perceive violence.”

Bocanegra has already been able to put his new knowledge into practice in his role as codirector of the YSVP program. When a 12-year-old boy in the program witnessed the shooting outside the South Chicago Y in December, Bocanegra was quick to intervene.

He immediately reached out to the boy’s YSVP mentor, who talked to the boy’s family about the incident. Later, when they went on a field trip to the Pritzker Military Museum together, they discussed the shooting and posttraumatic stress disorder with the military veterans who volunteer with YSVP.

“It was the second time the boy had seen someone get shot,” Bocanegra says. “I think it’s important for the kids to know it’s not normal to kill someone. But it is normal to have a sense of fear.”