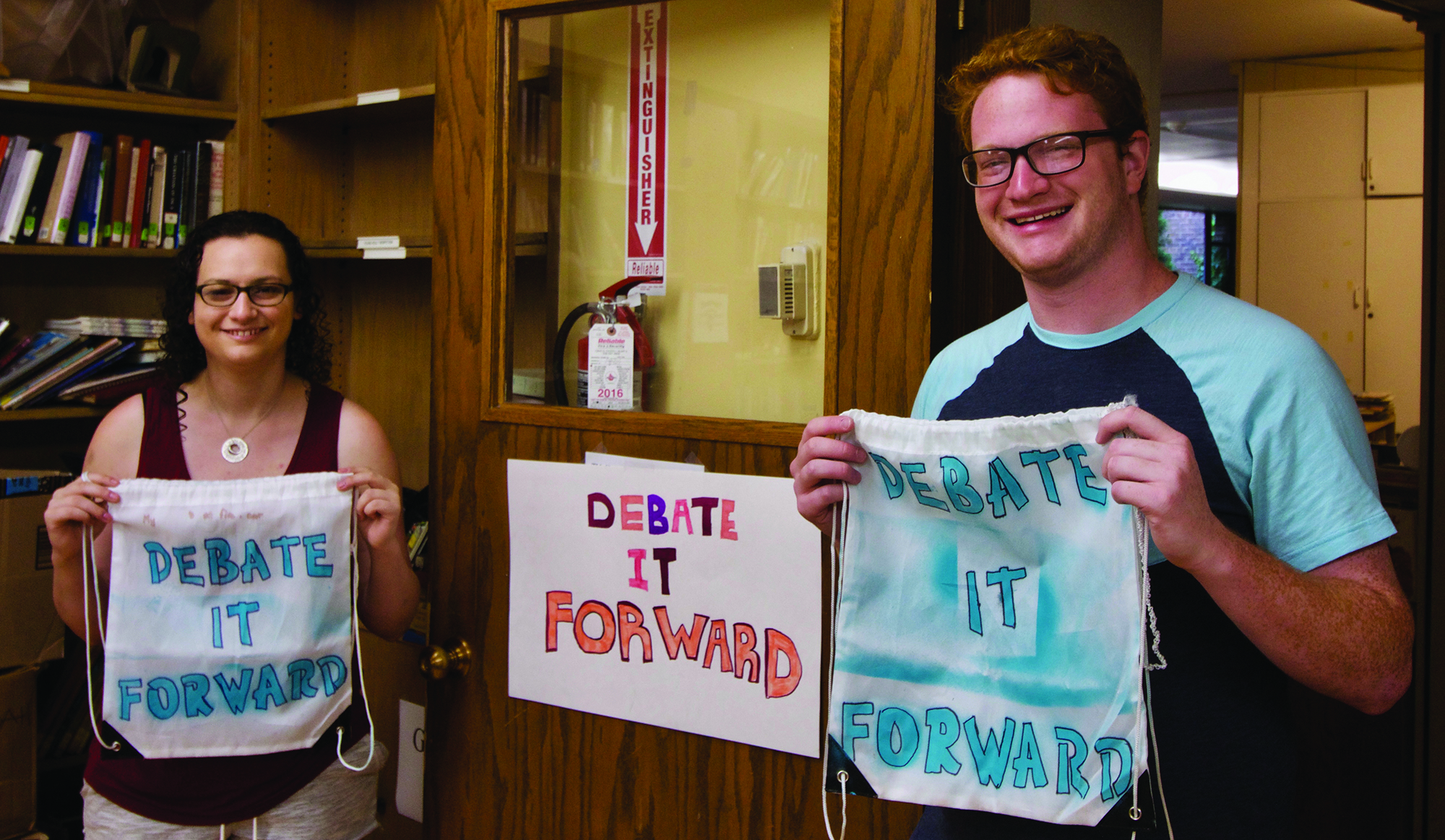 The founders of Debate it Forward believe playful wars of words can teach kids empathy and critical thinking.

On a quiet summer afternoon, a group of soon-to-be third graders is engaged in a spirited discussion: about when their promised snack of Goldfish crackers will arrive, who took whose pencil, and whether criminals should have access to a lawyer.

They’re sitting in the library of a Hyde Park synagogue, around a table strewn with lunch boxes, notebooks, and hand-decorated drawstring backpacks. As they talk, the kids fiddle with handfuls of squishy Playfoam. “Lawyers are expensive,” one child points out. “It’s hard to find good ones,” another agrees.

Debate it Forward is the rare program where you’ll find eight-year-olds weighing the merits of an adversarial legal system and, moments later, shoving Playfoam into their own hair. A summer camp and semester-long after-school program founded by fourth-year Leah Shapiro and third-year Josh Aaronson last fall, Debate it Forward uses the skills of debate to foster critical thinking, empathy, and confidence in elementary and middle schoolers.

“The more you get up there, you use your voice, your opinion, the more you’ll find that you have a voice to give, and the more you’ll be able to take ownership of yourself and your learning,” Aaronson says.

Each day of the weeklong camp begins with a debate question such as “Should people who have committed serious crimes have access to a lawyer?” and a related field trip. This morning, for instance, the roughly 30 campers, a mix of rising third and eighth graders, visited the Cook County courthouse, met with Illinois circuit court judge Alison Conlon, and sat in on a real trial. Now, after lunch and some quick debate-focused games, the third graders are divided into teams and prepare to face off in a 10-minute structured debate: argument from Team Affirmative, argument from Team Negative, question time, rebuttal. (“But what’s a buttal?” one camper asks.) Outside, the eighth graders are preparing for a brief debate of their own.

At times the discussion resembles Kids Say the Darndest Things: Criminal Justice Edition. One debater sagely points out that criminals shouldn’t get lawyers because, as the person who committed the crime, “no one knows more about the case than they do.” Another has more pragmatic concerns: “A lawyer wouldn’t want to defend someone who would kill them if something went wrong.”

But through all the silliness, Aaronson and Shapiro are confident the kids are learning essential skills: how to listen, how to evaluate ideas, how to speak with conviction. And they believe their program can be especially helpful for students who are typically “overlooked by the traditional debate circuits,” Aaronson says—students with learning and developmental differences, ranging from autism to attention deficit hyperactivity disorder.

Shapiro was a successful high school debater and debate coach, but the idea of teaching debate skills to kids didn’t occur to her until a year and a half ago. She was in the car with her six-year-old cousin when he began to throw “the tantrum of all tantrums.” On the fly she devised a game that resembled exercises she used as a coach: she would make a statement, and her cousin had 20 seconds to tell her why she was wrong. “What kid isn’t going to take you up on that?” Shapiro says. The game quickly distracted the six-year-old out of his tantrum—and gave Shapiro an idea.

“I started thinking if you could find a way to deemphasize the competitive nature of debate you could probably expand it to a much broader base of kids,” she explains. Shapiro took the idea to her classmate Aaronson, who had spent a gap year after high school working in a Milwaukee public school through the City Year program.

Together they developed a curriculum of debate-focused games and exercises. Students especially love the “infomercial game,” in which they’re given a worthless item, like a snapped rubber band, and have to explain why it would make a great birthday present. “That’s mainly where we work on persuasive speaking,” Aaronson says. Today’s campers played a game where they had to justify absurd statements, such as “clocks do not tell time.”

This year, with help from a staff of fellow UChicago students, they’re offering Debate it Forward at nine schools in the Hyde Park area. The program concludes with a mock trial or debate, but competition isn’t the main focus—these are intended as a “showcase of skills,” Aaronson says.

Shapiro and Aaronson met at summer camp when they were 13 and reconnected when they found themselves living on the same floor in DelGiorno House. Now they’re both roommates and business partners (“I can’t get rid of him,” Shapiro jokes). Their living room has become the Debate it Forward headquarters, complete with what Aaronson describes as “a fancy whiteboard, which we’re really excited about,” where they brainstorm new ideas for games.

Their ambitions for the program have expanded as they’ve seen its effects. Shapiro remembers one student with a diagnosed learning difference who started out reluctant but by the end of the program was “the first one to raise his hand.” His parents later told her it was the first time the boy had enjoyed an activity that called for verbal skills. “It was a huge breakthrough for him,” she says. Aaronson recalls how proud students at the UChicago Charter School Woodlawn Campus felt when they performed well in a mock trial with students from the Laboratory Schools. “The total 180 in their entire self-confidence, their demeanor, was incredible,” he says.

What Shapiro and Aaronson thought would be a college extracurricular is now their postgraduation ambition and a nonprofit with a 10-year plan. Their hope is to expand Debate it Forward nationally and even internationally and reach as many students as they can. They’re also raising money for scholarships that will allow them to waive the program’s fee for students and schools in need.

Today, however, they’ve got their hands more than full with 30 young debaters. After a spirited back-and-forth among the eight-year-olds (featuring a long discussion of whether someone could commit a crime unknowingly while asleep) the counselors declare Team Negative the winner. They tell both teams how close a call it was and how much they struggled with the decision. It was, they emphasize, a real debate.

This story was originally published in the Fall/17 print edition as “Up for Debate.”