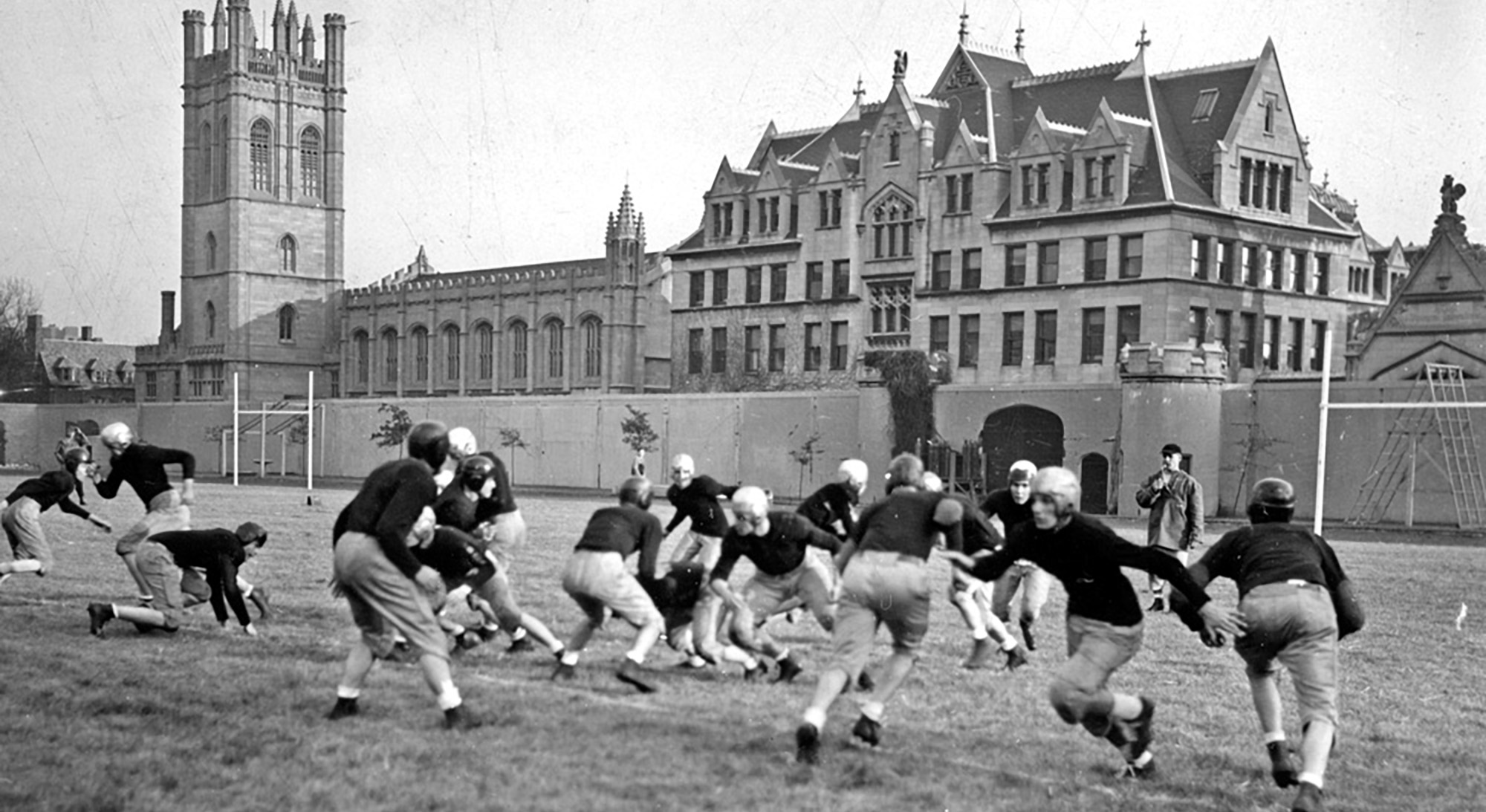 Although Robert Maynard Hutchins disbanded UChicagoʼs football team in 1939, that didnʼt stop students from participating in intramural games, including the one from 1947 above. (Photography by Walter E. Parker, UChicago Photographic Archive, apf4-00765, University of Chicago LIbrary)

A player in the Universityʼs 1949 Philosophy Bowl Game recalls the action on Stagg Field in this 1961 article.

Despite the brisk, cold, but sunny afternoon, the green turf of the playing field, and the sound of footballs being punted, an air of unreality seemed to hang suspended over the field. It was November 1949, but the decaying stadium and the faded, archaic uniforms and helmets took the spectators back to the 1920s and 1930s. Adding to the unreality were the names of the two teams, the Aristotelians and the Platonists. Such an event could occur in only one place: Stagg Field at the University of Chicago.

Several weeks earlier two non-playing students, Al Bruggemeyer [AB’50, MBA’52] and Len Carlson [EX’52], along with a score of interested players, had convinced the University’s athletic department that they should be allowed to organize football teams and play in Stagg Field. Most of those interested came from the ranks of the dormitory and fraternity touch football teams which abounded on campus.

University authorities were cooperative and assigned two athletic department members, Kyle Anderson [SB’28] and Kooman Boycheff, to coach the two squads into which the athletes were divided. Enough uniforms were found in storage to equip the sixty-odd students involved. There were few Goliaths but many Davids, and since the previous Chicago elevens had included many small men, most of the participants were able to fit into the vintage uniforms.

During October and November, practice sessions took place in both fair weather and foul on the practice field adjacent to the University field house. The coaches stressed fundamentals, particularly blocking and tackling, and agreed that in any contest between the two teams only a limited number and variety of plays could be used. Despite the lack of experience, training, and conditioning, practice injuries were few and none was serious. Determination to practice was great, and often the daily afternoon scrimmages took place as dusk approached. At such times, since there were no field lights, defensive linemen and backs often tackled anyone or anything that moved.

The decision to hold a “Bowl Game” was one made by both players and coaches. All concerned were interested in testing the abilities of the students who had practiced hard for several weeks. The name of the event—the Philosophy Bowl Game, between the Aristotelians and the Platonists—seemed a fitting accompaniment to the University’s curriculum, which stressed philosophy, and most of the participants felt more like philosophers than football players. The thought of reviving football as a collegiate sport was not in anyone’s mind.

On November 22, 1949, at 3:00 p.m. the game began. There were no big brass bands, no cheerleaders, nor was there a huge crowd. Fans in the stands numbered three to four hundred, and, for once, a college football game was watched almost entirely by college students. Reporters and photographers from a few Chicago newspapers recorded the strife, while a lone broadcaster from the student radio station reported the details to those too cold-blooded to leave the warmth of their dormitories and fraternity houses.

Fans were not treated to a dazzling display of football skill, and the ghosts of such Chicago greats as Walter Eckersall [AB’37], [James] “Five Yards” McCarthy [PhB 1907], and Jay Berwanger [AB’36] were not present to egg on the fifty-six participants to superhuman efforts. Lack of experience, nervousness, and the cold contributed to sloppy play, and the limited number of plays available to both teams prevented any spectacular efforts to score.

Action was slow as each team continued to throttle the other’s attack. Fumbles were numerous and by game’s end totaled twelve. At half time the numbing cold forced the spectators, along with the participants, into the dressing rooms beneath the north stands.

Play became more savage—if not more skillful—in the second half, and fumbles increased. With three minutes remaining in the final quarter, the Platonists recovered a fumble within striking distance of the Aristotelian goal line. Hard-driving fullback Don Bostwick [EX’52] carried the ball 28 yards to the goal line, dragging in his wake two defenders. The attempt for the extra point failed. Almost immediately the Aristotelians took to the air, with quarterback [Gene] Borowitz [PhB’51] completing three passes. The team was within five yards of the goal line when the gun sounded and play ended—perhaps for all time on Stagg Field. For one third-string Platonist quarterback named Bernard Wax [AB’50, AM’55] it was a game and a victory to be remembered.

This article originally appeared in the November 1961 issue of Illinois History, which was published by the Illinois Historic Preservation Agency by the authority of the State of Illinois. It appears here with the permission of the author, Bernard Wax, AB’50, AM’55, who was a field services supervisor at the Illinois State Historical Library at the time of the original publication.