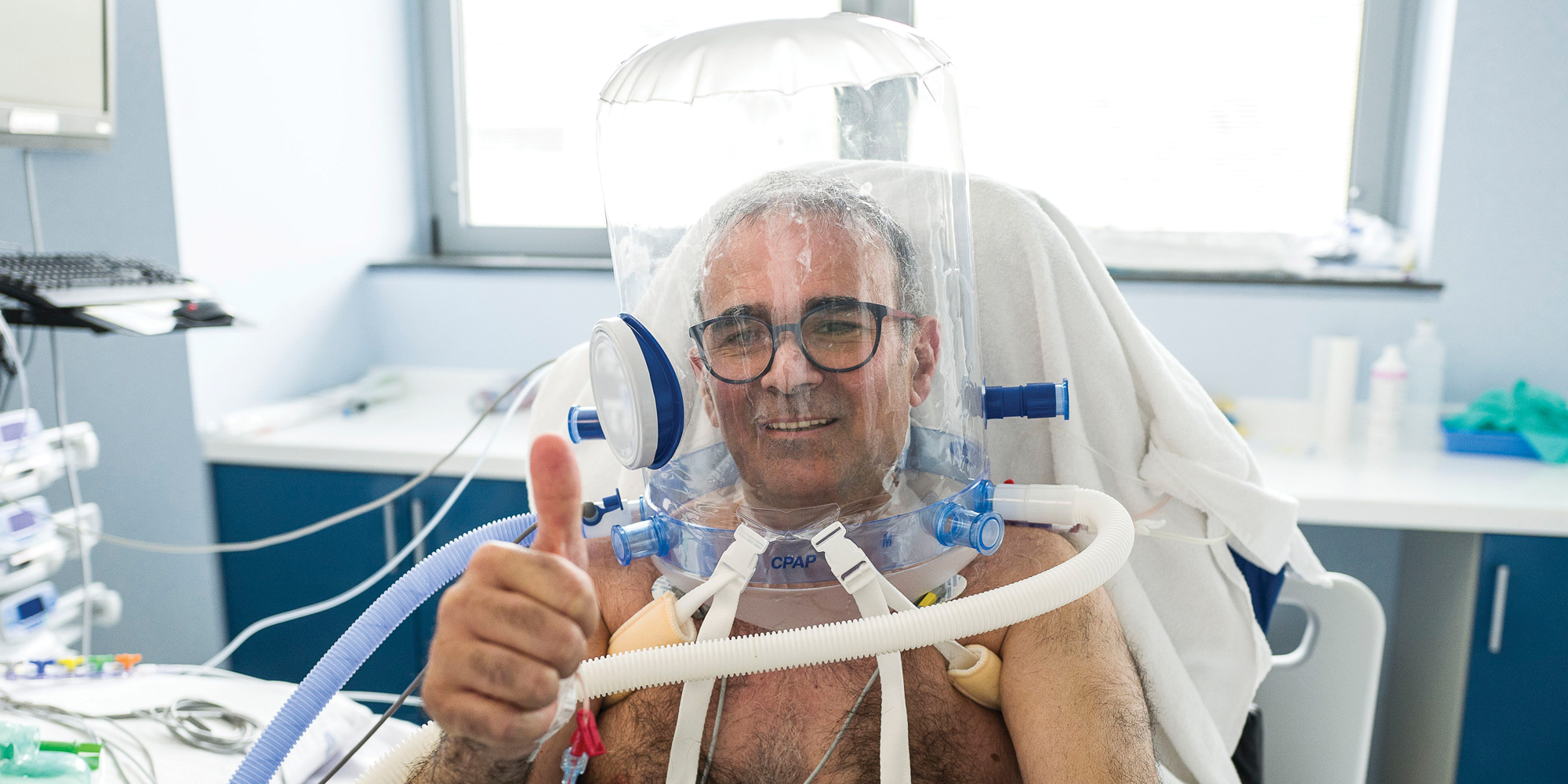 Ventilation helmets, like the one shown here, are among the tools UChicago Medicine doctors use to keep as many COVID-19 patients as possible off mechanical ventilators. (Photo by Fabrizio Villa/Getty Images)

Inside a February planning meeting for COVID-19 and the early days of UChicago Medicine’s response.

On February 3, weeks before COVID-19 began to dominate US headlines, leaders at UChicago Medicine were preparing for the battle ahead. Seated around a large boardroom table in the Center for Care and Discovery were more than 20 representatives from across the medical center. Doctors with different specialties sat alongside delegates from legal, communications, and logistics.

The meetings are one component of HICS, the Hospital Incident Command System, an emergency response protocol used by many American hospitals. Krista Curell, vice president of risk management and the medical center’s designated incident commander for COVID-19, is heading up UChicago Medicine’s response to the outbreak, along with the hospital’s chief epidemiologist, Emily Landon. Even on this Monday morning, with confirmed US cases still under a dozen, they know there is little time to waste.

The medical center has updated its computerized medical record system, prompting doctors and nurses to ask patients about their travel history. Medical staff have also received a refresher on how to correctly “don” and “doff,” in hospital lingo, personal protective equipment (PPE), such as gowns and face shields.

Curell starts the agenda with Landon, who runs down the latest updates from the Centers for Disease Control and Prevention on testing and travel restrictions. (She will later make national news for her persuasive way of explaining the need for social distancing at a March press conference called by Illinois governor J. B. Pritzker: “It’s really hard to feel like you’re saving the world when you’re watching Netflix from your couch. But if we do this right—nothing happens.”) Curell then continues around the table, stopping at legal, human resources, supply chain, clinical operations, and communications leaders for updates.

Curell and Landon linger on logistics. One update prompts a cheer: they’ve tested the emergency department’s ventilation system and it’s working beautifully. Right now, logistics reps say, they’ve got an adequate supply of PPE and the Chinese-produced medications they need. They might need to seek new suppliers, “if this has a long tail.”

“This will have a long tail,” Landon says quietly.

Thanks to a long-standing partnership between the Pritzker School of Medicine and Wuhan University School of Medicine, Landon and her colleagues have firsthand insights into the accelerating pandemic. They’ve heard from their Chinese counterparts that CT scans may be especially useful in diagnosing the new respiratory illness.

With the hospital’s CT scanners working nearly at capacity already, the representative from radiology wonders aloud whether it would be possible to set up a mobile CT scanner in a trailer. Curell says it’s something to think about. They’ll have to figure out where to place the trailer—and where to plug it in.

The rest of the meeting is taken up with miscellaneous questions: Will patients be referred to UChicago Medicine from other hospitals? (Hospital leaders will take guidance from the Chicago Department of Public Health on that, Landon replies.) Are the cough-and-sneeze stations throughout the medical campus well stocked with tissues, hand sanitizer, and masks? (Yes.) With a nasty flu season already underway, does anyone need Tamiflu? (Chuckles.)

Today’s session—they’ll reconvene next week and later switch to daily meetings as the pandemic worsens—concludes with a discussion of staff, and how best to keep them safe. Landon offers an impromptu call to arms: “It may feel new and feel scary but is no scarier than the things we see every day. Everyone is trained. They are experts in how to do this already. They just need the courage and confidence to do it.”

Twelve weeks later, the hypotheticals discussed in February had turned into real life at UChicago Medicine. Cook County was nearing 30,000 COVID-19 cases and had exceeded 1,200 deaths from the virus. Thanks to the ongoing planning in HICS meetings, the breadth of experts and resources available at a major research university and its hospital, and a number of strategic innovations by researchers and health care providers, UChicago Medicine was weathering the storm. Doctors were able to treat and discharge hundreds of patients with severe cases of COVID-19, and in many instances avoid the most invasive and potentially harmful measures.

After hearing reports from Wuhan, China, and Italy early in 2020, UChicago Medicine personnel thought of Jaws, said Thomas Spiegel, medical director of the emergency department, in an April 23 Facebook live chat: “We’re going to need a bigger boat.” They designated two floors of the Center for Care and Discovery as COVID-19 only and converted a large space near the emergency department, adding 80 chairs there to see patients with less-serious medical needs. The hospital also flipped its ambulance bay into another treatment area and developed special “cohort” units to cluster patients with confirmed cases of the virus and other units for those with suspected infections.

Meanwhile, additional spaces within the hospital were identified for backup beds, and the hospital worked to ensure needed infrastructure such as sufficient electrical power and the ability to pump in enough oxygen. The supply chain team worked around the clock to get shipments of masks, gloves, and gowns—even partnering with local 3D printers to make hard-to-find face shields. The medical center began curbside testing clinics, working with community partners to test hundreds of people a day for the SARS-CoV-2 virus.

“Prevent the vent” became the watchword for the health system’s clinicians, who took a number of measures to keep their most critically ill patients off mechanical ventilators as early studies linked the devices’ use in COVID-19 care to high mortality. UChicago Medicine was among few US institutions in the pandemic’s early stages to use ventilation helmets. These fit comfortably over a patient’s head, have an airtight seal around the neck, and help patients breathe without the need for a mask, breathing tube, or sedation. The helmets, more commonly used in other countries including Italy, were already familiar to some UChicago Medicine doctors; back in 2016 pulmonologists John P. Kress and Bhakti Patel published a National Institutes of Health study showing the devices reduced time in intensive care and increased survival.

Another noninvasive tactic that was proving effective was the use of high-flow nasal cannulas, which sit below the nose and deliver a large dose of warm, humidified oxygen to the nose and lungs, but without stretching the lungs like mechanical ventilation, said Michael O’Connor, AB’83, MD’87, director of critical care medicine. In April the cannulas became another cornerstone of the medical center’s COVID-19 treatment, keeping many patients in respiratory distress off ventilators. In a group of dozens of emergency department patients given cannulas—many also positioned on their stomachs to aid breathing—only one eventually required intubation.

While UChicago Medicine’s clinicians were identifying ways to better treat the sickest patients on the ground, numerous studies to help understand the novel coronavirus were underway. Faculty from many specializations were able to use samples from UChicago Medicine patients for research to identify promising antivirals, antibodies and vaccines, and ways to combat the hyperimmune response that endangers some patients. One widely reported trial was identifying blood donors among recovered patients in Chicago to study whether their plasma could help treat hospitalized ones. Still in its earliest phase at press time, the study focused on establishing safe and feasible ways to identify donors, collect donations, and administer transfusions. Additional trials will be needed to see if such treatments are effective.

As May approached, understanding of the virus was still in its infancy and the questions facing researchers—in Hyde Park and the world over—were countless. But early planning and widespread social distancing measures had helped fend off a debilitating crush of cases at UChicago Medicine, bettered the outcomes for many patients, and provided a measure of time and space for clinicians and researchers to tackle COVID-19’s mysteries.

Read more about the Universityʼs response to the COVID-19 pandemic in “Together in Spirit.”