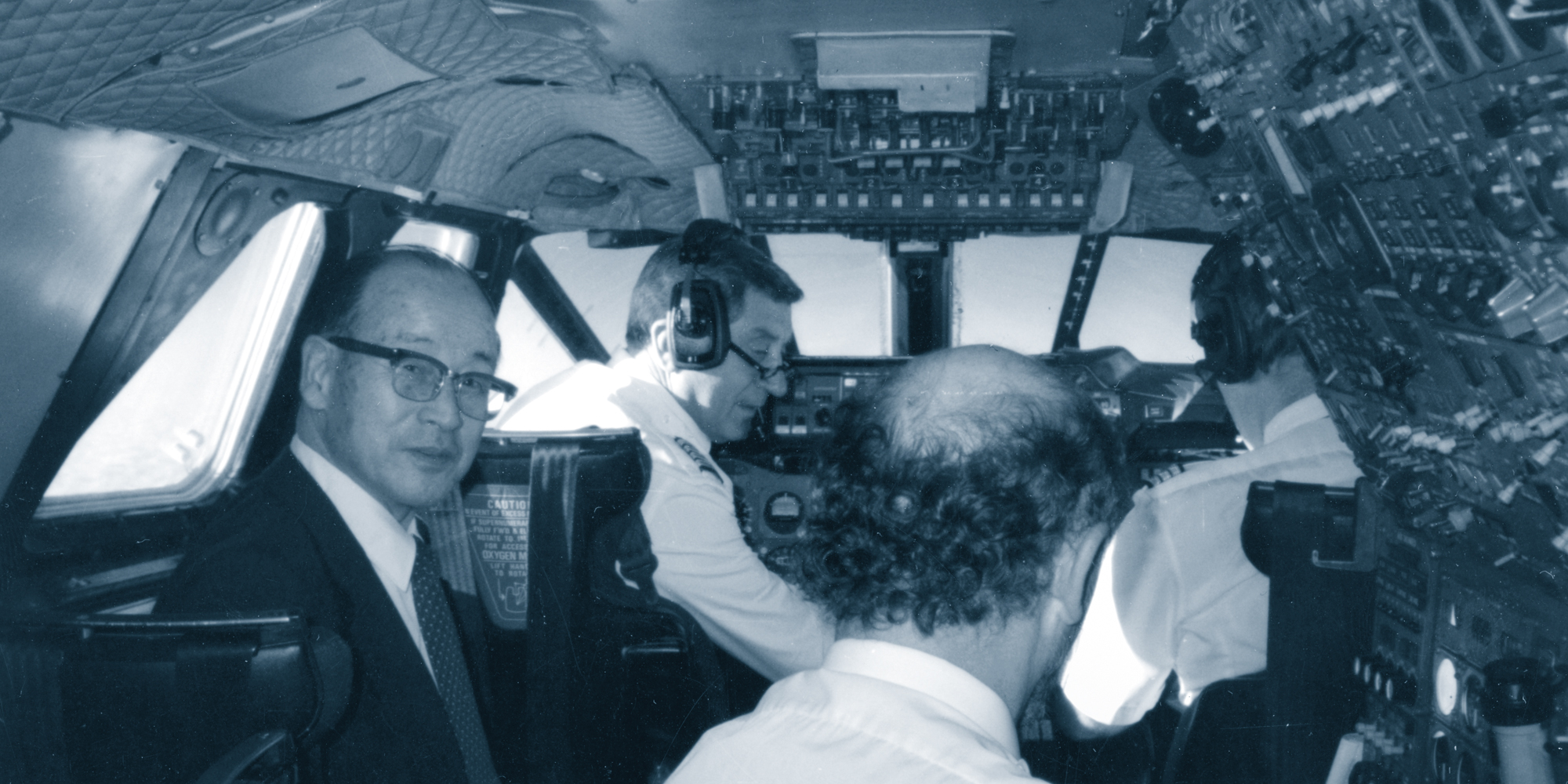 Ted Fujita (shown here at left in the cockpit of a Boeing 747) conducted much of his tornado research from the air, surveying more than 300 tornado paths from a low-flying Cessna between 1965 and 1991. (UChicago Photographic Archive, apf1-09832, University of Chicago Library)

Singing for the pine trees are stormy winds

By
Author
Maureen Searcy
|
The University of Chicago Magazine
—
Fall/20

Radar has a blind spot directly above the antenna, so when a funnel cloud spun out of the sky over Raleigh-Durham International Airport at about 1 a.m. on November 28, 1988, there was no notice. The day had been unseasonably warm, reaching 75 degrees, yet no watch had been issued when the tornado—a four out of five on the Fujita Tornado Damage Scale—sent a tree crashing through our roof.

The sun rose with the buzz of chainsaws, neighbors chopping up so many felled pines that it smelled like Christmas. Our split-level was skewered by a branch through the attic and into the upstairs bathroom. My classmate’s house was sheared in half, open like a dollhouse; we could see her mother upstairs talking on the still-functional telephone. My sister’s classmate was killed. More than 2,000 homes were damaged, 1,000 people left homeless.

No one knows the wind speed of that tornado. Even now, scientists can’t directly measure the most powerful twisters; their equipment can’t withstand the force. The F Scale—developed by UChicago meteorologist Tetsuya Theodore Fujita, who surveyed that storm’s wreckage—is based on the level of devastation, gleaned from the aftermath.

Born in 1920 on the Japanese island of Kyushu, Fujita grew up visiting nearby volcanos, “observing the angry face of our living planet,” he wrote in Memoirs of an Effort to Unlock the Mystery of Severe Storms. The book, published by the Department of Geophysical Sciences in 1992 to commemorate his 50 years in meteorology research, testifies to the scientist’s observant—and sometimes poetic—nature: it includes Fujita’s chronicle of a slowly melting mountain of plowed snow, a gallery of praying mantis “friends” in his backyard, and his translation of a Japanese folk song about a castle in ruins, surrounded by storm-blown pines.

In 1939 Fujita was accepted to both Hiroshima College and Meiji College of Technology. Minding his late father’s wishes, Fujita chose the latter. There he studied mechanical engineering but assisted a geologist, who put him to work creating bird’s-eye views of local volcanic craters using topographic maps. After graduating in 1943, he stayed on as an assistant professor of physics.

On August 6, 1945, the United States dropped an atomic bomb on Hiroshima. Three days later, a second bomber approached its target: Kokura Arsenal, three miles from Meiji College. While he and others sheltered, air-raid sirens sounding, the bomber found its intended target obscured by clouds and rerouted to Nagasaki.

Fujita was among the Meiji College faculty and volunteer students sent to Nagasaki and Hiroshima in the ensuing weeks to document the effects of the bombs’ fireballs and shock waves. He noted something peculiar: broken trees radiating out from ground zero in a starburst pattern. He would see this again in the United States, where the majority of Earth’s tornadoes strike, and would draw enlightening comparisons between nuclear shock waves and severe weather.

In the days following that 1988 Thanksgiving weekend storm, Fujita’s UChicago research team traveled to North Carolina to examine the damage, collecting evidence like detectives investigating an assault. It was one of more than 300 tornado crime scenes he surveyed between 1965 and 1991, mostly from a low-flying Cessna, with his wife, Sumiko Fujita, and a roster of students, staff, and colleagues. During these flyovers, they looked at the paths of destruction, noting differences in damage along the way and concluding that tornado behavior fluctuates. A twister is not so much an entity as a process. Fujita’s documentation served to both qualify the behavior and quantify its effects.

No tornado has ever scored higher than an F5, because the associated damage at that stage is complete and utter destruction. But technically, Fujita’s scale goes much higher, bridging the Beaufort Scale, used by sailors to estimate wind speed based on observations of the sea, and Mach numbers, the ratio of an object’s speed to the speed of sound. Fujita’s F1 matches Beaufort 12—hurricane wind speeds—and F12 equals Mach 1—the speed of sound.

Fujita published his proposed tornado scale in 1971, but it needed a high-profile event to take root. On April 3, 1974, a tornado touched down in Morris, Illinois, around noon. Over the next 17 hours, 148 confirmed tornadoes tore through 13 states and Ontario, Canada. Following the 1974 Super Outbreak—one of the worst tornado outbreaks on record—Fujita and his team took a whirlwind airplane tour of more than 10,000 miles, surveying the ruins.

That investigation yielded thousands of photographs, radar and satellite images, and interviews. It amounted to the most sophisticated tornado survey to date. Fujita was able to illustrate his F Scale with real-life examples, standardizing a system his peers had considered too arbitrary.

He also gathered evidence for a theory he had posited years before, that smaller tornadoes—suction vortices—could form inside and rotate around the core of the parent tornado. His theory was based on the observation of cycloidal marks (imagine a stretched-out spring) in open fields, previously thought to be scratches in the earth where a large object was dragged across the ground. Using a telephoto lens, Fujita discovered the tracks were actually piles of debris, sucked up and laid down by these internal vortices. This theory explained why one house could be demolished while the one next door was left untouched.

No one had ever seen such a configuration, so Fujita’s colleagues dismissed him, not for the first or last time. But film of the Super Outbreak captured the multiple suction vortices, confirming his theory. His crime scene reconstructions revolutionized storm risk assessment and climatology studies, positioning him as the country’s leading expert and earning him the nickname Mr. Tornado.

Fujita is best known for his tornadic affections, thanks to the eponymous F Scale, but he also studied cloud migration, hurricanes, and thunderstorms. The last brought him to UChicago. While still in Japan, wishing to earn more income in the postwar economy, Fujita received a grant to draw weather maps. Using the atmospheric data collected by weather stations, he paid close attention to localized conditions rather than the larger cold and warm front trends most mapmakers favored. He saw meaning in the small variations and came to focus on mesometeorology, the study of midsized atmospheric phenomena.

In 1947 Fujita climbed to the top of Seburi Mountain to document a thunderstorm, recording temperature, wind speed, and air pressure in 10-minute intervals. He noticed pressure anomalies inside the thunderstorm that indicated the presence of a downdraft, down-flowing air currents now known to be a characteristic of every thunderstorm.

In a 2020 PBS American Experience documentary, Greg Forbes, SM’73, PhD’78, severe weather expert for the Weather Channel and a Fujita student, explains how the mountaintop experiment put Chicago on Fujita’s radar. After one of the conferences where he presented his largely ignored downdraft hypothesis, someone handed him a report on thunderstorm research salvaged from the garbage at a nearby American military installation. It was written by Horace Byers, UChicago meteorologist and director of the US government’s collaborative Thunderstorm Project.

As a scholar of similar weather, Byers might be more receptive to his ideas, Fujita thought, so he mailed English translations of his papers to UChicago, including his research on downdrafts. Byers—whose team had separately discovered downdrafts—was impressed with Fujita’s independent finding and invited him to the University as a visiting research associate.

Fujita reflects in his memoirs that, having strayed no further than 30 miles from his birthplace as a child, his “vision of the world was no more than that of a small frog in a deep well.” In 1953 he traveled to Chicago, spending the first of hundreds of airplane rides sketching cross sections of clouds. For the flight he borrowed $650, the equivalent of more than $6,000 today, and he had $22 on him—the maximum allowed per Japan’s postwar foreign-currency rules. In San Francisco he boarded a train with a three-day supply of fig bars and Coca-Cola, which sustained him until he checked into International House on 59th Street. Three years later, after returning to Japan briefly, Fujita brought his family back with him to Chicago, taking up the directorship of the Satellite and Mesometeorology Research Project.

While he conducted his revolutionary tornado research at UChicago, inspired by his move to the Midwest, Fujita’s early work on straight-line (nonrotational) winds continued. His early downdraft observations in Japan—and his peers’ indifference—foretold a coming storm of controversy. After Eastern Airlines Flight 66 crashed in 1975 while landing at JFK International Airport during a thunderstorm, killing 113 passengers and crew, the airline asked Fujita to investigate. He came to suspect that the crash was caused by an unknown form of wind shear—a rapid change in wind speed and direction—he later called a “microburst.”

Flying over the Super Outbreak the previous year, Fujita had noticed a familiar pattern that couldn’t be explained by the tornadoes: fallen trees in a starburst pattern, like those felled by the atomic shock waves in his home country. He had modeled airflow based on the damage and deduced a powerful downdraft that produces an outburst of damaging winds near the ground—essentially an explosion of air from a thunderstorm. Based on that model, combined with reports from pilots who landed around the time of the crash, flight recorder data, and an airport anemometer, he concluded that a microburst brought down the plane.

When he published a paper about the crash, the meteorology community lambasted him. In newspapers across the country, meteorologists told reporters Fujita had misinterpreted the evidence and was merely renaming the well-known typical downdraft found in thunderstorms. Notably, the paper in question was not published in a peer-reviewed journal. Most of Fujita’s research was publicized through University of Chicago project reports and conference proceedings, adding to the controversy over his methods.

To capture evidence, Fujita conducted a set of experiments in Chicago’s western suburbs using Doppler radar. The radar directly detected microbursts, yet the dispute persisted, splitting the community into what Fujita called “bursters” and “anti-bursters.” It wasn’t until 1985—after at least six major airplane crashes now attributed to wind shear and a near miss involving Air Force One, carrying President Ronald Reagan—that prevailing opinion shifted. A jumbo jet that crashed at Dallas-Fort Worth had a digital black box that recorded more types of data than earlier analog flight recorders. From that data Fujita was able to conclusively prove that a microburst downed the plane. The Federal Aviation Administration rushed to install Doppler weather radars at major airports to help detect wind shear conditions—as well as tornadoes that form outside the blind spot.

Fujita was frequently dismissed and disavowed by the meteorology community for his unconventional style, and only accepted, case by case, when he presented incontrovertible proof. But he relied on that style—observational, inferential, exhaustive—to reveal weather behavior his critics could not see. “He had a very different path as a scientist,” says geophysical sciences professor Noboru Nakamura, who joined UChicago just after Fujita retired from teaching. “I had the fortune of talking to him until he died in 1998,” he says. “He had a story to tell.” That story was based on a lifetime of looking.

During a microburst experiment near Denver in 1982, Fujita, who had been studying severe weather for 40 years, finally witnessed a live twister. He was “as giddy as I’ve ever seen him,” former student Roger Wakimoto, PhD’81, told PBS. He celebrated with a drinking party and later on with a cake, icing inscribed with, “Mr. Tornado sees his first.”