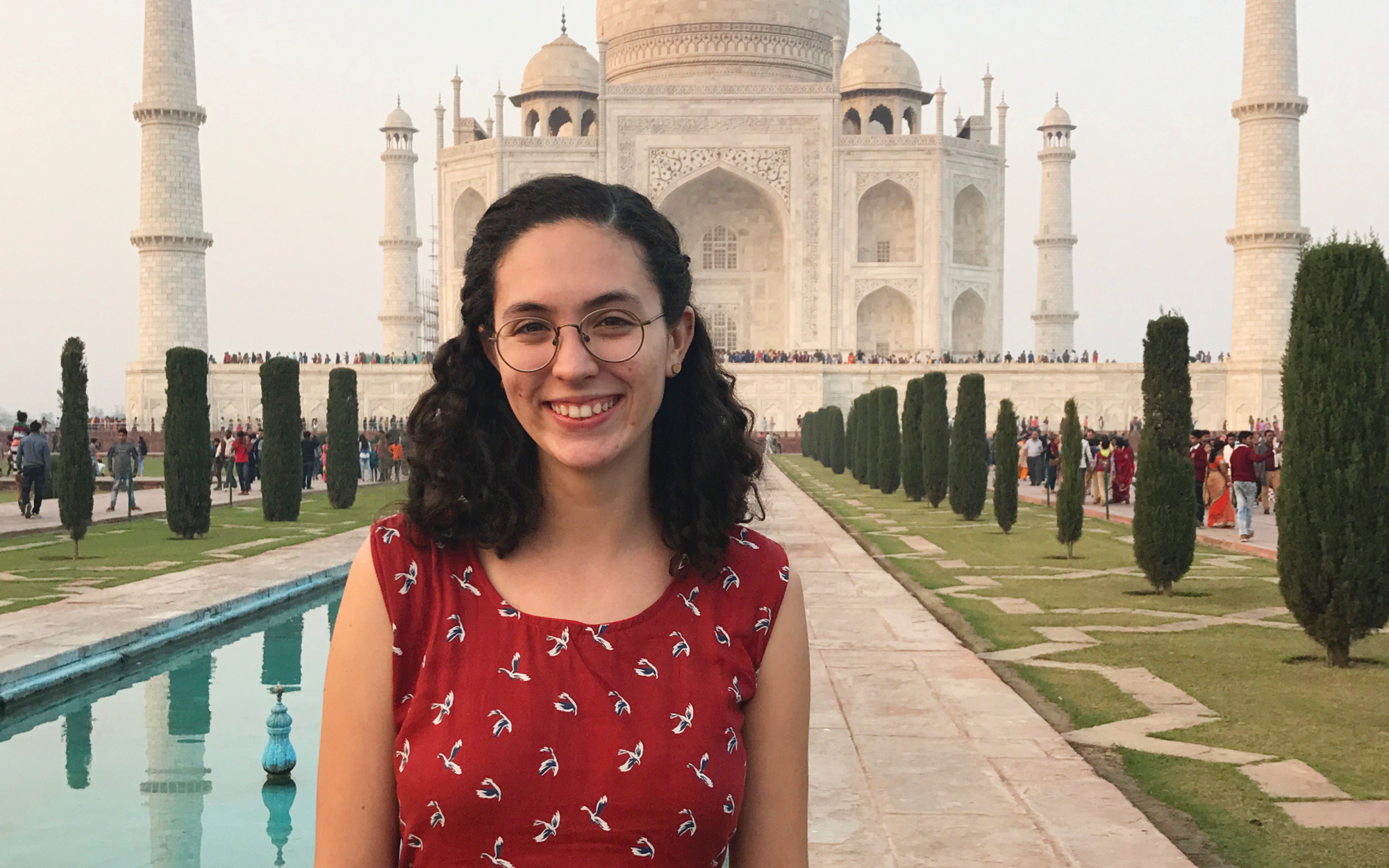 Marissa Combs, AB’19, on a group trip to the Taj Mahal during the College's program in Pune, India. (Photo courtesy Marissa Combs)

How much stuff should I bring?

“Really logistical questions” are typical, says Study Abroad ambassador Marissa Combs, AB’19, who studied in Pune, India, in 2017. (“Younger people call it Pu-NAY. Older people tend to call it Pu-NUH. I say Pu-NAY.”) She estimates that 20 or so undergrads have sought her out to ask advice.

For another common set of questions, “Were you scared? Were you nervous?”, Combs has a standard (and inspiring) answer: “Be fearless,” she says. “If you approach whatever program you’re in with an open mind, you will learn so much about the place you’re going to—and yourself and the place you come from. Just lean in.” The Core spoke with Combs and two other ambassadors, Julia Selch and Addison Jeske, both AB’19, about their study abroad experiences and their advice.

Interviews have been edited and adapted.

I approached Study Abroad from two perspectives. One was practical: I was looking for a civ program. Secondly, I did not want to go to Europe. It’s bor—I don’t know. I feel like we spend so much time learning about European civilization, culture, and society. Sure it would be a lot of fun, but it wouldn’t be the most informative or transformative experience.

In Pune we lived in a hotel. I was like, who am I, Eloise? We had breakfast together every morning, and we’d practice the language with the staff, and we had dinner every evening. Even though at first it was strange, it ended up being lovely.

The park that we would pass through to get to the UChicago Center in Delhi—which is right next to an Audi dealership—has an enormous homeless population. You are confronted, every single day, with wealth inequality. As a traveler, that’s troubling. What’s your responsibility to help? I was traveling on a pretty tight budget. In Chicago I can feel overwhelmed by the wealth that some of my peers have, and yet I had the reverse experience there. It was a reflective moment.

The neighborhood where I grew up in New York is 50 percent Indian or of Indian descent. All my best friends were from India. So the music, the food, the customs, I was really familiar with. All the other stuff you learn in civ—political and social and cultural history—was really unfamiliar. When traveling, I always err on the side of being conservative, being quiet, being a listener not a doer at first. That’s good practice anywhere.

Fall is a great time to study abroad because you have that built-in summer and winter break time. At the end of the program, my friends and I took almost three weeks to travel independently in India. I was traveling with a core group of five and each of us had a task: planes, trains and automobiles, lodging, food, budget. It was highly planned, but I as an individual didn’t have to do a lot of planning.

Indian cuisine is really varied. When you’re traveling, don’t just get your typical butter chicken or vegetable curry—try something regional. Go easy on the food in the first week but expose yourself early to street food, because that’s where all the good stuff is. The best meal for lunch in Pune is a pav bhaji, which is a loose light airy bread with a vegetable or chicken curry. It’s the best thing in the world. I didn’t discover the pav bhaji until sixth week, and then I think had one every day. I wish I could bring the food back with me.

I was planning on doing this program since high school, and had studied Japanese for six years. But when I first got to Japan, I was so focused on being grammatically correct that I would not say anything. I realized I had to learn the language anew—to speak practically, not from a textbook. It’s better to make a mistake than just be silent.

I lived with a host family, which I would recommend. I had friends who lived in apartments by themselves. When they got home from school, they would be like, “It’s English time!” but I tried to make my entire life Japanese. I would listen to Japanese music, watch Japanese TV, just inundate myself with Japanese material. By the time I left, I was fluent.

Every day was a challenge. Sometimes after dinner I was so tired from school, I would pass out on the couch in the living room while my host family was watching TV. My brain had just been on fire the entire day. I got to a point in the year where I didn’t have English anymore. I had some American friends, but we would speak in Japanglish.

In my town I was the only person who was not Japanese. They all knew me, so if I did anything wrong, it would be very awkward. You go through periods of it bothering you, and it just being comical. Comical because I could be the token American girl in places, and I would make friends by virtue of that. I could practice Japanese anywhere.

In Japan, you defer to your speaking partner. You protect the feelings of the group a lot. People are hesitant to say their individual opinions—they’re very cognizant of the group and not injuring anyone else’s viewpoints. That was very different from my college experience here, where everyone just says whatever they want with no regard to other people.

As an American, you’ll be excused for a lot of mistakes, but they’ll internally judge you a lot. You can’t jaywalk ever. I’m from New York and it’s a necessity. One time, a few months in, I was so frustrated. There were no cars, and I knew I wasn’t supposed to, but I was burning up inside. As I was crossing the street, I saw a woman teaching her child: “You see this American girl? Don’t do what she’s doing.”

One thing I did not realize is that in Japan, you use cash everywhere. Also, people still use CDs and fax machines. It’s really advanced in some ways and backwards in other ways.

My advice would be, think long and hard about whether you want to be gone for an entire year. Also, every hour that you’re there counts. When you’re walking around, read everything, listen to everything, do everything. Don’t take this opportunity for granted.

I’m pretty involved with RSOs on campus: Ballroom and Latin Dance Association, Catholic Students Association, peer ministry at Calvert House, I play the carillon. For me, Study Abroad gave me the opportunity to take a step back. If you don’t, it feels like you’re trying to live your life on campus while you’re abroad, and that is wasting the chance.

I was the only practicing Catholic in the program. I made sure I went to Mass when traveling, which was most weekends. Before study abroad, I would just disappear for an hour. But when you’re traveling, you need to know where everyone is. Finding a Catholic church in Italy is not a hard thing, but being able to talk with your friends about your faith openly and honestly, and making sure they understand why it’s so important to you—that was sometimes challenging. The advice I would give is, if you’re going to live your faith, live your faith.

Often I went to Mass in Italian. I was in intermediate Italian for the program, because I had taken a year on campus—that doesn’t mean I’m good at Italian. If you put most Catholics in a mass in any language, they’d be fine. I went to one Latin pre-Vatican II Mass in Salzburg, which was interesting.

When you’re choosing where to study abroad, obviously location is important—not just the country you’re staying in, but its proximity to other places. For example, if you’re studying in Pune, it’s unlikely that you’re going to travel outside India during that program. The second thing is, what does UChicago have there? In Paris, there’s a big center and you live in a dorm. Some places you stay in homestay, some places in apartments. The differences between those are pretty big. That was something I didn’t think about at all, but I was totally fine with living in an apartment with other students.

I had a Metcalf Internship in Chicago and worked two other jobs to make sure I had money to go. I saved money for eating out on weekends by making the same one-euro meal every day during the week. I bought a few bags of pasta, marinara sauce, red peppers—and if I was feeling super splurgy, ground beef—with onions and garlic. I made a huge bowl of pasta with marinara sauce and veggies and some cheese on top. It was a very nice, wholesome Italian meal.

I did eight different trips on weekends, spending half of that in Italy. Ideally I spent less than 50 euros total for travel. I visited Pisa, Lucca, and Orvieto on my own, which was really nice. I traveled to Dublin over Thanksgiving, and after the program I went to Salzburg, Nuremberg, and Munich. Before the program I went to London and had a brief stint in Paris.

For budget travel, doing research in advance is the most important thing. The times when I had the worst meals were the times when all the restaurants I had picked out were closed. You can pay a lot in time to save money in dollars.

Read more in “Study Abroad in Pictures and Numbers” from the Summer/19 Core.