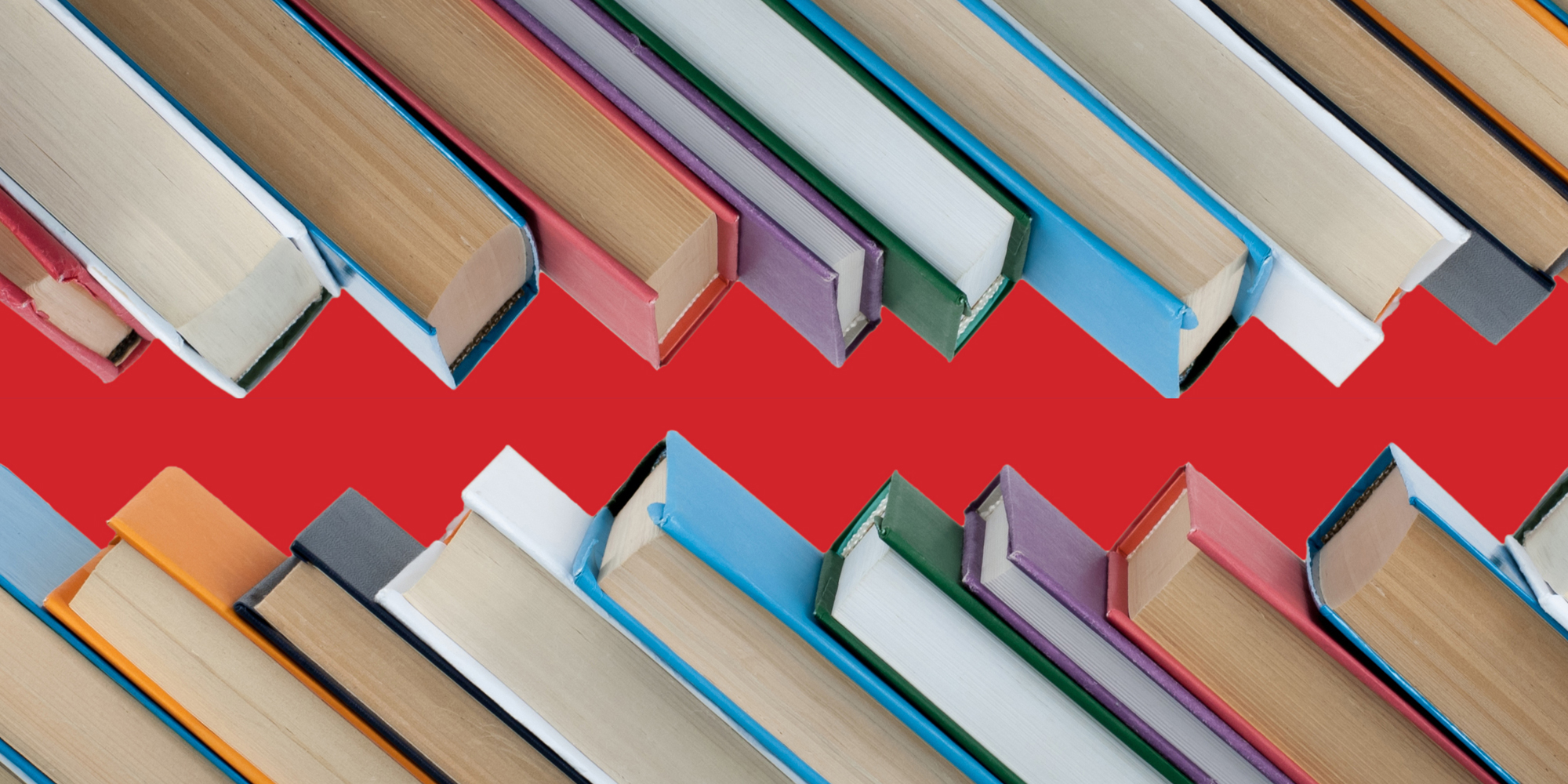 Established by T. Kimball Brooker, AM’89, PhD’96, the T. Kimball Brooker Prize for Undergraduate Book Collecting has been awarded by the University of Chicago Library every year since 1990. (Svitlana Unuchko/istock, adapted by Guido Mendez)

This spring, in a conference room at the Joseph Regenstein Library, Rosanna Warren and second-year undergraduate Clare Kemmerer engaged in the debate that divides bibliophiles everywhere: To lend or not to lend?

Warren, the Hanna Holborn Gray Distinguished Service Professor in the John U. Nef Committee on Social Thought, is firmly anti. “I never lend my books,” she says. Kemmerer is pro. She keeps track of the 306 volumes in her personal collection in an Excel spreadsheet and has a special column where she notes everything she’s lent out. At this point she’s running a mini library out of her dorm room. “I get little freshmen knocking on my door,” she says, asking to borrow from her.

Lots of UChicago students are, at the very least, inadvertent book collectors. Between course readings and recreational trips to Powell’s and the Seminary Co-op, many a Maroon has ended their college career wondering how on earth they ended up with so many books—and how to schlep them home, or to their next apartment.

But some, like Kemmerer, who owns 12 bibles (seven English, two Greek, one Latin, one Hebrew, one French), are on a different level. For these students, there is the T. Kimball Brooker Prize for Undergraduate Book Collecting, awarded by the University of Chicago Library every year since 1990.

The prize was established by T. Kimball Brooker, AM’89, PhD’96, an accomplished collector of rare books. It comes with a cash prize—$1,000 for a second-year student and $2,000 for a fourth-year student—and a membership to the Caxton Club, a society for Chicago book lovers and collectors. To enter, students submit a bibliography and an essay about their collection. Finalists are invited to come to the library and present a selection of their books.

That’s what brought Kemmerer to the Reg in April, along with her heavily annotated edition of St. Augustine’s Confessions (Oxford University Press, 2009); The Lais of Marie de France (Labyrinth Press, 1978); and an art book that includes a section about religious tattoos. Her collection’s title, arguably worthy of its own prize: “The Only Crush I Have Is the Crushing Weight of My Sins (Love and Faith in Christian Literature).”

The judges who award the Brooker Prize aren’t necessarily looking for valuable or rare books. Rather, according to the Library’s website, “primary consideration is given to the thoughtfulness and intent in building the collection around the collector’s interest. … Whatever its defining quality may be, the organizing principle should be apparent in every item of the collection.”

This year’s judging panel is a veritable “who’s who” of Hyde Park’s book community. Along with Warren, there’s Jeff Deutsch, director of the Seminary Co-op Bookstores; Garrett Kiely, director of the University of Chicago Press; Michael Thompson, a collector and member of UChicago’s Library Society; Catherine Uecker, head of research and instruction at the Special Collections Research Center; and Nancy Spiegel, the Library’s bibliographer for art, cinema, and history.

Kemmerer begins her presentation by explaining her winding academic path. She transferred from the New School in New York to the University of California, Berkeley, before arriving at UChicago. “My book collection has been with me through all three schools,” she says. Today “they’re eating my dorm room.” (For logistical reasons, she’s glad she doesn’t have a roommate: “I would be so afraid of books falling on them.”)

Kemmerer’s affection for her collection is apparent as she describes the books she’s brought to share with the judges. She considers all of it to be pleasure reading. “I read all of these for fun,” she insists as the judges peruse titles including Why on Earth Did Anyone Become a Christian in the First Three Centuries? (Marquette University Press, 2016). Kemmerer pauses on The Lais of Marie de France. The medieval poet is “just a charming person, and I love her very much.”

Equally passionate about his collection is finalist Danny Licht, AB’18. His assemblage of cookbooks, titled “A Joyous Science,” was born of necessity: he was moving to an apartment and wanted to learn to cook. He found a copy of Alice Waters’s The Art of Simple Food: Notes, Lessons, and Recipes from a Delicious Revolution (Clarkson Potter, 2007) and wound up getting a summer job at her legendary restaurant Chez Panisse.

That experience led him to the work of chefs and food writers such as Elizabeth David, David Tanis, and Paul Bertolli. Bertolli’s Cooking by Hand (Clarkson Potter, 2003), one of the titles he’s brought to present to the judges, has a special place in Licht’s heart: “The section on balsamic vinegar is really moving.”

Licht tells the judges that, at this point, the collection is more motivational than instructive. “I already know how to cook,” he explains. “What I’m looking for is books that augment and inspire that cooking.”

Khia Kurtenbach, SB’18, also presents the judges with a selection of cookbooks—though hers are of a decidedly different flavor. Many were passed down from her grandparents and reflect her family’s roots in the Midwest. When asked what she’d like to add to the collection if she were to win the prize, Kurtenbach says there’s a book about Jell-O she hopes to acquire.

Kiely spots a recipe that calls for “pieces of pheasant”—“Which pieces?” he says with a laugh. Warren chuckles over a section in Easy Suppers (H. P. Books, 1980) containing a recipe for a candlelit dinner for two. “There’s a whole John Cheever story implied in this recipe,” she says.

Aliya Slayton, AB’18, is full of stories as she describes her collection of books about linguistics, “From Tung to Tongue: Language History and Usage.” One of the first items she acquired was A Dictionary of First Names (Chambers, 2009). The cover is wrapped with a sheet of white paper because she wanted to bring the book on a middle school trip but thought the baby-filled cover might look odd to her classmates. She’s fascinated by names and where they come from.

“Something that unites my collection is that it’s not theoretical,” Slayton says. She’s brought two titles by John McWhorter, The Power of Babel: A Natural History of Language (Henry Holt, 2001) and What Language Is (And What It Isn’t and What It Could Be) (Gotham, 2012) both aimed at a lay audience.

Much of what the finalists present is familiar to the judges, particularly Deutsch, who has a bookseller’s encyclopedic knowledge of titles and editions. He asks Slayton why she picked the particular edition of H. L. Mencken’s The American Language (Cosimo, 2008) she has in her collection; Slayton says it’s what she happened to find.

But Anna Wood’s (AB’18) collection of Mexican small press poetry, “Learning a Love for Spanish Language through Latin American Poetry,” is terra incognita for the judges.

She bought many of the books in Mexico City last summer while working on a chapbook of her own poems. Some have the handmade quality of zines, while others were commercially produced—though in very limited quantities.

Uecker notices that many of the books are first editions. “Is that important to you?” she asks. Wood explains that it’s not intentional but often happens by accident, “because I seek out things that are rare.” Kiely points out that for many of the titles in the collection, the first edition may be the only edition.

After the presentations are complete, the judges begin their deliberations. It turns out to be an easy decision. Of all the finalists, they agree, Wood seemed the most interested in the beauty of books as objects—something that distinguishes collectors from people who are simply avid readers. Kemmerer stands out for her passion for collecting and the clear vision behind her collection. They agree Kemmerer will receive the second-year prize, and Wood the fourth-year prize.

For Wood, learning she had received the prize was a happy and unexpected graduation gift: “It’s a really nice ending to my fourth year to have my book hoarding rewarded.”

She’s always had books around, she says. “My house was always full of books growing up, and because of that I just developed a habit,” she says. “Anytime I go to a used bookstore, especially, I can’t help but grab a handful.” But her Mexican small press poetry is the first focused and defined collection she’s ever had. With the help of the prize, she’s planning to add to it this summer, when she goes back to Mexico. Like every good book collector, she’s on the hunt.

Selections from the Brooker Bibliographies

Clare Kemmerer, Class of 2020
The Only Crush I Have Is the Crushing Weight of My Sins (Love and Faith in Christian Literature)