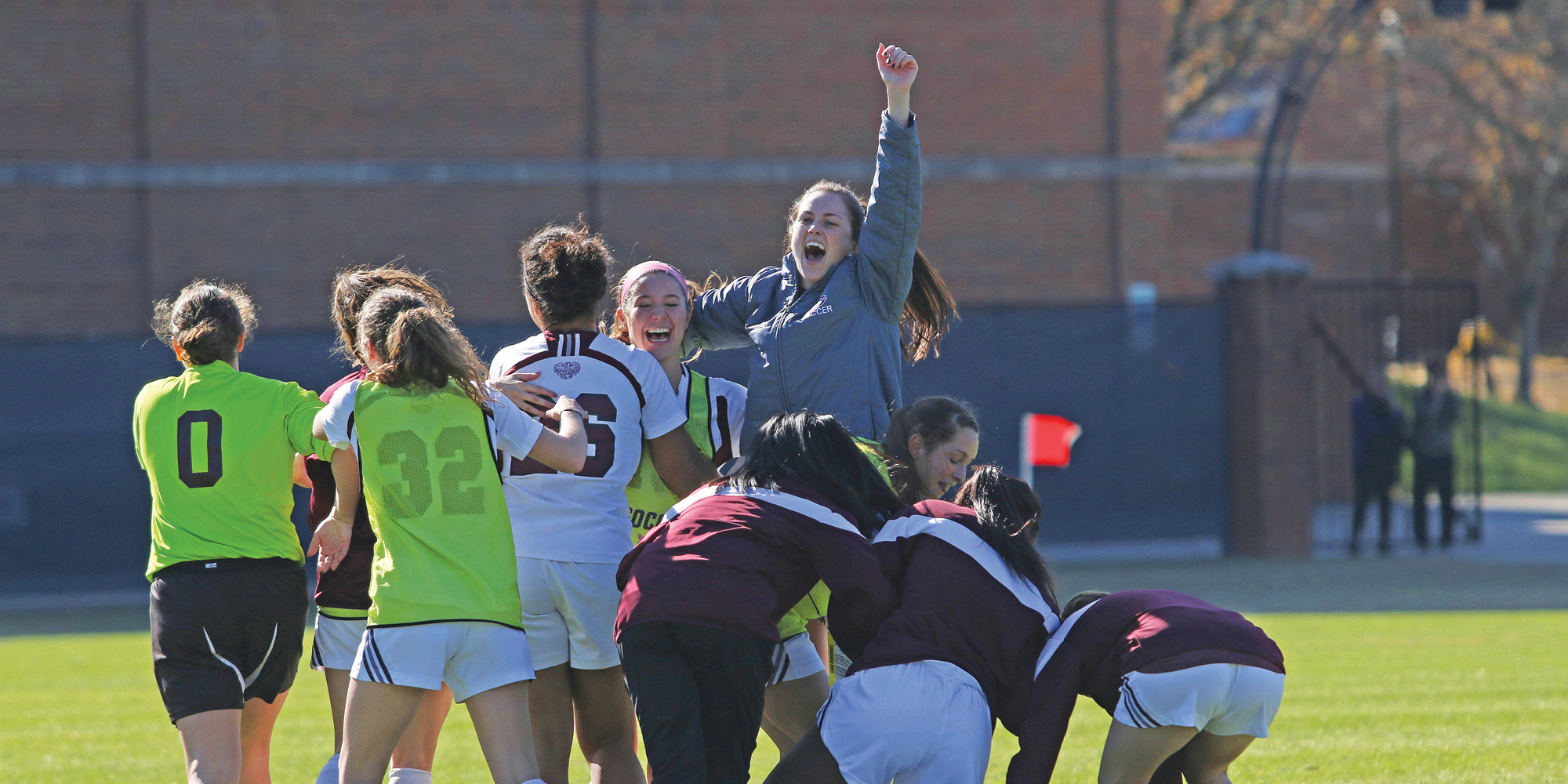 Goal oriented: The men’s and women’s varsity soccer teams are in it together

After their record-breaking seasons came to bittersweet ends, both teams are already thinking ahead to next year.

By
Author
Jeanie Chung
|
The University of Chicago Magazine
—
Winter/18

Caroline Olivero, Class of 2018, a forward and cocaptain on UChicago’s women’s soccer team, says her “punny, nerdy side” is just as important as her soccer side. She was happy to come to UChicago, where Nobel Prizes outnumber Heisman Trophies and the “sick” Chicago Debate Society sends teams to nationals every year.

“We have people at our school who are amazing dancers, or people who do Model UN,” she says, adding that college sports may be a big deal elsewhere, but in the College “it’s just like any other passion that people have that’s extracurricular.”

Olivero chose UChicago because it had “the best learning community for people who love to learn. Not just people who want to excel.” This season she and her fellow soccer players—women and men alike—did both. The women’s team reached the NCAA Division III championship game, falling just short of a title in a 1–0 loss to Williams College. The same weekend, the men’s soccer team played North Park University to a 0–0 tie in the semifinals, ultimately suffering elimination from the tournament on penalty kicks. Despite the squads’ ultimate disappointment, it was a banner season for both, and a bonding one.

Fundamental to the balance Olivero describes between soccer and nerdery, learning and excelling, is Amy Reifert, the Maroons women’s soccer coach for 27 years. Her counterpart on the men’s soccer team, Mike Babst, has learned a lot from Reifert since he arrived in 2013 but says her insight into the UChicago student-athlete has been most valuable. “Her biggest concern,” he says, “is that they have the best experience here overall. She has a really great perspective of how athletics fits within that.”

Specifically, it fits into a set of circles. “Your house is a circle,” Reifert says. “If you’re a chem major, or you’re premed, then typically the kids in your chem lab are a circle.” The more circles the better, because “you have that many more friends, which then means you’re having more fun, which then means getting that much more out of college.”

Each soccer team is a circle too, and the coaches and players think of the men’s and women’s teams as forming another. The men and women don’t practice together, but in University Athletic Association conference competition they play doubleheaders, travel together, and stay in the same hotels. When they eat dinner on the road, the coaches dictate they must mix by both gender and year. Over summers, men and women in the same city will often meet for workouts and informal coed games.

“Our fortunes are tied together, there’s no question,” Reifert says. “Our ultimate goal is for both of us to win a national championship together on the same day.”

That didn’t happen this year, but the teams did travel together to the Division III Final Four in Greensboro, North Carolina, in December—the first time since 1996 they both reached the semifinals. The women had repeat final four appearances in 2003, when they lost the championship game in overtime; in 2005; and in 2016.

Fourth-year Stacey Reimann, Class of 2018, a cocaptain and defender on the men’s team, says success on the field builds connection off it. The relationship between the men and the women “has evolved so much more because of the pace [at which] both our teams are progressing.”

So when the men and women each were eliminated, they proved to be each other’s best support systems. Ordinarily the NCAA arranges for teams to fly home the morning after elimination, but UChicago’s men and women had both decided that if one squad lasted longer in the tournament, the other would stay to cheer on their fellow Maroons.

Reifert, who called the men’s elimination “heartbreaking,” ran into Reimann the next morning, before her team’s championship game. “I was crying,” Reifert says. “I was so sad for him. And he said, ‘Coach, don’t cry. It’s not over yet. You guys are going to win today.’”

Later that day, as he watched the women play for the championship, Reimann says, he realized when the final whistle blew, it would signal more than the end of the game. “It was the first time the loss of my season really hit me.”

The fourth-years from both teams have an ongoing group text chain. The conversation was “kind of depressing” after the losses, Olivero says, but they were glad to have it.

“There is that shared camaraderie in loss,” Reifert says. She expects the feeling to fuel off-season contemplation of “what do we need to do to get back” to the final four next year. “They’ll share that too.”

This story was originally published in the Winter/18 print edition as “Goal Oriented.”