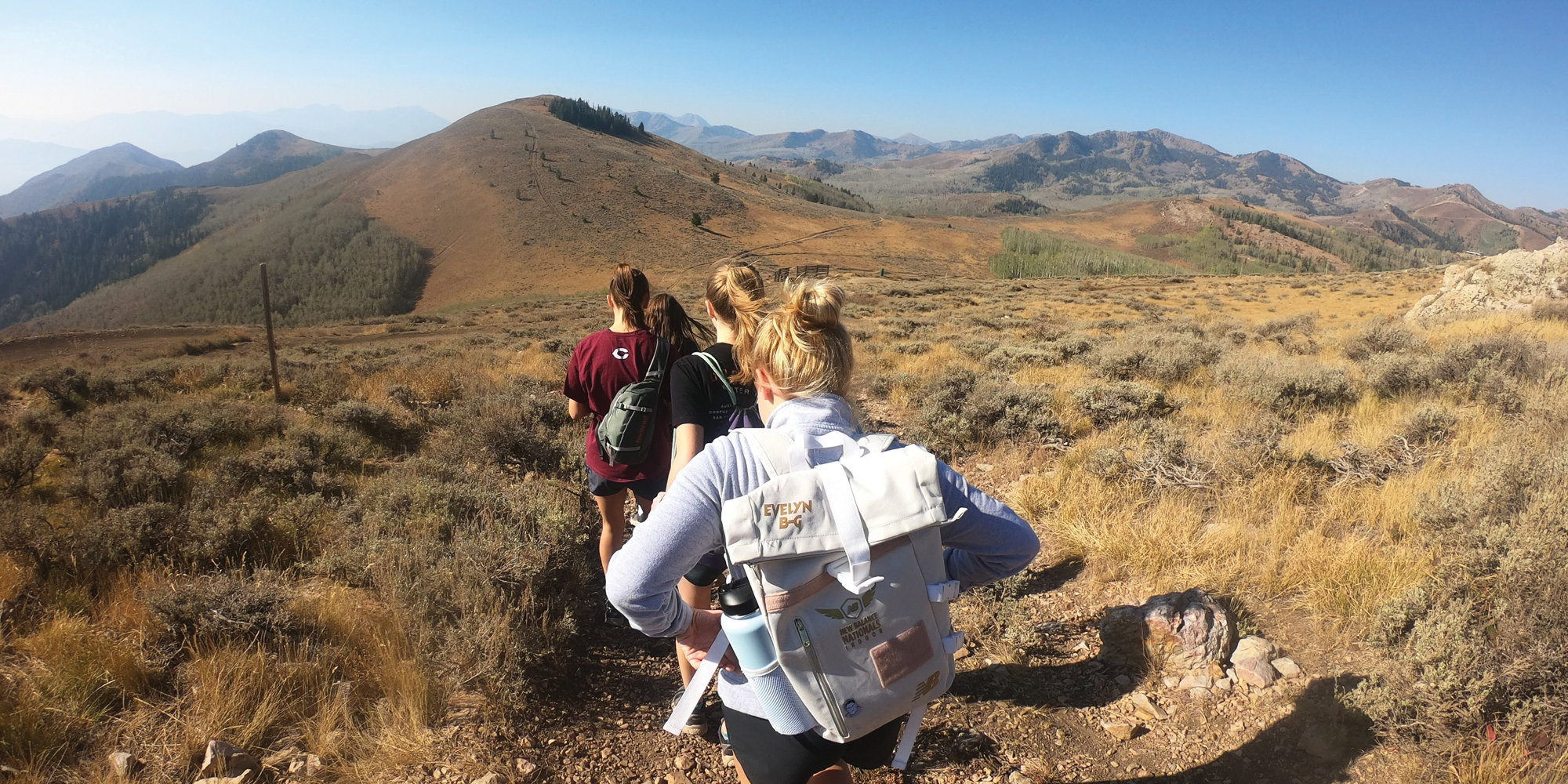 First-year cross-country runners start the academic year off with an altitude adjustment.

Lydia Lo and Catherine Wimmer were excited for their first year at UChicago, eager to take classes and run for the Maroons’ cross-country and track teams. But as the summer of 2020 wore on and COVID-19 showed no signs of letting up, they got worried.

Schools across the country started switching to remote learning. Fearing the same thing would happen in Hyde Park, they wondered: Why not get a group of first-year runners together to live, study, and run at altitude for Autumn Quarter and what would have been cross-country season?

“We thought it would be a good way to train,” Wimmer says, “and it might be nice to go somewhere secluded.”

They scoured the web for rentals, looking in Colorado, Wyoming, even Hawaii. They finally found an affordable four-bedroom, four-bath townhouse in Park City, Utah (population 8,500)—not quite secluded, but certainly less crowded than Chicago and offering necessary amenities like Wi-Fi, nearby grocery shopping, and abundant open trails for running. With a destination in mind, they reached out to as many of their first-year teammates as they could.

Although some people took a little bit of convincing, and their parents took even more, “everyone was pretty down,” Wimmer says.

And so the weekend before classes started, six runners from the Class of 2024 arrived in Utah: Lo from Texas, Wimmer and Evelyn Battleson-Gunkel from New Jersey, Cara Chittenden from California, Karis Ertel from western New York, and Lucy Groothuis from Michigan. All had received negative COVID-19 tests and were careful about masks and social distancing before and after their stay.

None had ever been to Utah or trained at altitude. That alone, Lo says, was “very different from anything we’ve ever experienced.” They were also getting used to college classes, Zoom—most of their high school classes in the spring involved only asynchronous assignments—and living with people they’d just met.

They learned to give each other space and share chores. They didn’t draw up a chore chart, though Lo admits, “that might’ve been a good idea.”

Focusing on academics was a challenge at times, Wimmer says, especially with the temptations of a “runner’s paradise” like the Park City area. “It’s hard to not think I have an obligation to go outside and see something cool.” Eventually their days settled into a routine: classes and schoolwork in the morning, a run in the afternoon, grocery shopping or other errands, more schoolwork, dinner, often a movie at home. They had more time to explore on the weekends; a trip to the Bonneville Salt Flats was a highlight.

They took turns cooking. Wimmer made brussels sprouts and salads, Lo made chicken, Chittenden whipped up pancakes and smoothies, Battleson-Gunkel made macaroni and cheese. “We all have our specialties,” Lo says.

As the group bonded, they kept in regular contact with their teammates and coach Chris Hall, who helped them adjust their workouts and expectations to account for the altitude. “It’s more a matter of knowing you’re breathing heavy because it’s high altitude,” Wimmer says, “rather than being worried you’re out of shape.”

They also discovered students from other schools—Harvard, Princeton, Stanford, more—living nearby and spending their fall the same way. COVID-19 restrictions meant they couldn’t meet up, but Lo says they connected on social media, establishing “a unique sense of community.”

Although they were looking forward to seeing their families for the holidays and then being on campus in January, the runners were a little sad to leave when their rental ended before Thanksgiving. “Everyone is happy we made this decision in the end,” Wimmer says, “not only for our athletic and academic sides, but for our mental state.”

Learn more about what these student-athletes cooked in “First-Year Cusine.”