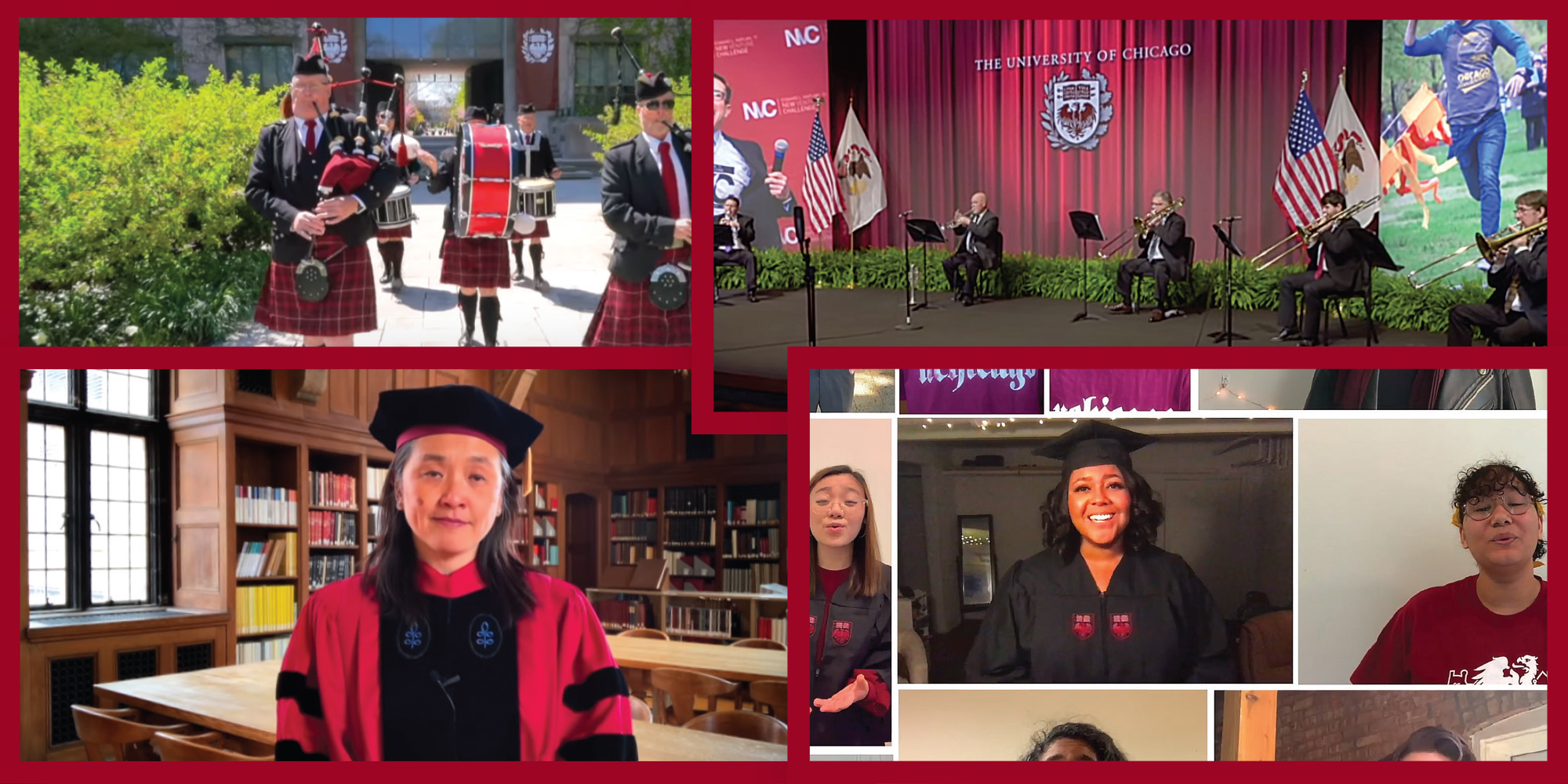 By
Author
Laura Demanski, AM’94
|
The University of Chicago Magazine
—
Summer/20

Early the morning of June 13 in Chicago, an unmistakable skirl was heard from computers and devices around the globe. Bagpipers and drummers set out across the main quad from Levi Hall in maroon, black, and white tartan kilts. Unlike every past UChicago convocation procession, this time the familiar sounds and sights were out of time, having been videotaped in May on an empty campus. Their emotional effect on the graduates of 2020, their families, and those of us who’ve attended many a live convocation ceremony was undiminished—as was the weight of the achievements they heralded.

This was the University of Chicago’s first virtual convocation. Other than a brief opening message from Provost Ka Yee C. Lee, the 533rd Convocation had been performed and recorded in May, to ensure that the Class of 2020 could watch in safety while a pandemic grew in many parts of the world. What did it have in common with the previous 532 ceremonies? Only the most important things.

President Robert J. Zimmer, in introductory remarks, reminded viewers of the ceremony’s primary purpose: to confer degrees. “But these occasions satisfy other objectives as well,” he said. He invoked convocation number one on January 2, 1893, where the University’s first president, William Rainey Harper, “set out goals for these ceremonies, goals leading to practices that we continue to observe. Harper believed these occasions of high ceremony to be a necessary and nourishing part of the life of a university.”

Among the goals Harper named was the coming together of the University as a whole. “Convocations are meant to bind together into a unity the many complex and diverging forms of activity which constitute our university’s life and work,” Zimmer said, drawing from Harper’s words. “Today’s ceremony is about reflecting upon the whole of what we do across the University.”

And, of course, it was about honoring the effort and achievement of each person awarded a degree that day: the challenge met. Zimmer hoped, he told the graduates, “that you still feel a collective sense of pride and unity for all that you have accomplished during your time at the University of Chicago.”

Their time after the University of Chicago will be unlike anything before, but they are well prepared for the challenge. That was the loud and clear message from Lee in her remarks: “History has shown us time and again that unconventional minds are built for uncertain times,” she said. “The world that you now venture into, more than ever, needs individuals with the courage to embrace the unknown, the drive to follow their passions, the audacity to defy the status quo, and the ability to transform ideas into actions.”

Following Lee’s remarks, the University’s deans took the stage one by one to present to the president their candidates for each degree awarded in the College, schools, and divisions. “By virtue of the authority delegated to me,” Zimmer conferred the degrees that morning, with diplomas to be delivered by mail. In separate ceremonies over the weekend, deans and leaders of the units recognized each individual who became a graduate this June.

Members of the College Class of 2020 were so recognized in eight diploma ceremonies for each of eight campus residential communities, thus ending their time as students with the same Maroons with whom they’d begun their UChicago journeys.

The class had come together as a whole the previous afternoon for a virtual version of Class Day, which the College calls “an intimate celebration for graduating seniors to reflect on their undergraduate experience and time in the College.” Speaking at Class Day were three students selected by their peers: Greer Baxter, AB’20; Annie Geng, AB’20; and Emily Stevens, AB’20. They were followed by Otis W. Brawley, SB’81, MD’85, a physician and cancer researcher—and now the Class of 2020’s fellow alum.