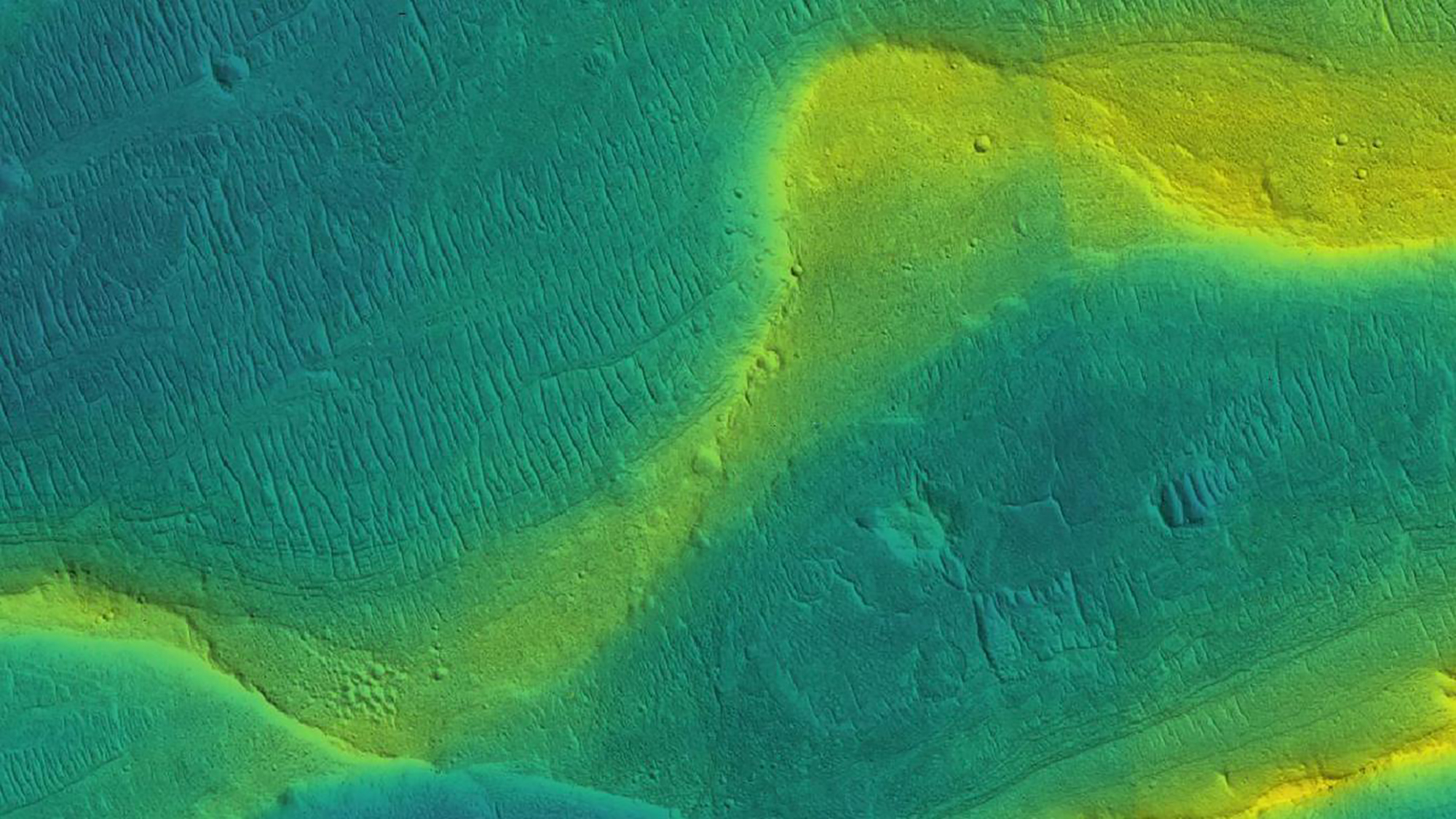 A photo of a preserved river channel on Mars with color overlaid to show different elevations (blue is low, yellow is high). (Photo courtesy NASA/JPL/University of Arizona/UChicago)

Say goodbye to sun salutations in the break room. Workplace wellness programs—an $8 billion industry—may not actually improve health. That’s the key finding of an April 16 study in the Journal of the American Medical Association, coauthored by health policy researcher and Harris Public Policy dean Katherine Baicker. She and her collaborator analyzed health outcomes at a large US warehouse retail company, which offered a wellness program at some work sites but not others. After 18 months, employees at sites with the program—which provided guidance on topics such as nutrition and exercise, as well as small financial incentives for participation—were no healthier than those at sites without it, as measured by body mass index, blood pressure, and cholesterol. But work sites with the program did have higher rates of employees who reported engaging in regular exercise and managing their weight.

Taking a bite out of disease

There are few good options for containing the spread of mosquito-borne diseases like Dengue fever and West Nile virus. Vaccines aren’t always available, and insecticides can harm the environment. That’s why scientists are looking to genetic engineering to control populations of disease-carrying mosquitos. In a Nature Communications study published March 5, researchers including computer scientist and microbiologist A. Murat Eren identified a small circular piece of DNA known as a plasmid within a bacterium called Wolbachia. Scientists had long hoped to find a plasmid—a useful tool for gene editing—in Wolbachia, which infects an estimated 60 percent of insects and can affect their ability to reproduce. Although it’s still early days, the researchers say the discovery could lead to a powerful new way of controlling populations of disease-carrying mosquitos.

Rivers ran through it

Fast-flowing rivers wider than the Mississippi crisscrossed the surface of Mars much later than previously thought, according to a study by planetary scientist Edwin Kite published March 27 in Science Advances. The discovery adds to the scientific puzzle of Mars’s climate: How could such a cold planet with a thinning atmosphere sustain liquid water? Kite and his colleagues studied images of more than 200 ancient Martian riverbeds, measuring their width, steepness, and gravel size, and used this information to estimate how much water flowed through the channels and for how long. The analysis revealed rivers were still raging across Mars as recently as one billion years ago. Younger rivers were shorter than older ones, but just as wide, suggesting that water continued to flow intensely even as the Red Planet’s atmosphere began to disappear.

The dirty laundry of import duties

When nations impose tariffs, who benefits and who suffers? After the United States applied import duties to foreign-made washing machines, consumers were left holding the (laundry) bag, according to an April 18 Becker Friedman Institute working paper from economists Ali Hortaçsu and Felix Tintelnot. The United States had previously tried tariffs targeting individual countries, but that proved ineffective—manufacturers would simply move their operations to other countries. Ultimately, the application of a global washing machine tariff in 2018 caused US washing machine prices to rise nearly 12 percent, the researchers found. (Interestingly, although dryers weren’t subject to the tariffs, they increased in price too.) While global tariffs did help US companies create new manufacturing jobs, the researchers estimate each new job cost consumers about $820,000. They argue policy makers should be delicate when considering global tariffs, because prices can spin out of control—and there’s no washing that away.