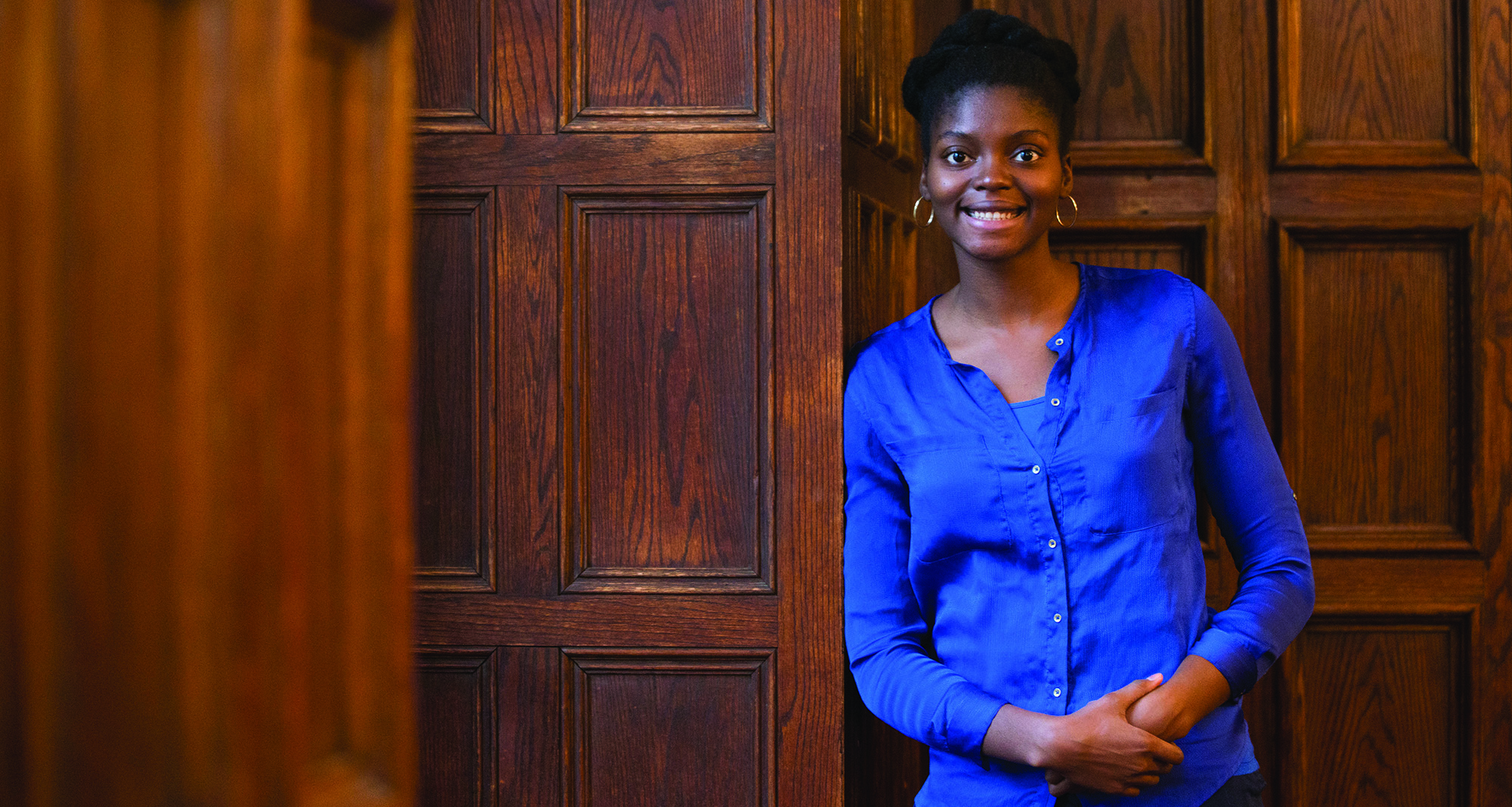 Ade Ayoola, an Odyssey Scholar and a fourth-year in the College, was selected as one of 49 inaugural Knight-Hennessy Scholars at Stanford University. (Photography by Jean Lachat)

The University of Chicago Magazine
—
Spring/18

Amanda Woodward, the William S. Gray Distinguished Service Professor of Psychology, was named dean of the Division of the Social Sciences, effective April 4. Woodward, a scholar of the social development of infants and young children, had been interim dean since July 2017. Executive vice provost David Nirenberg, the Edgar D. Jannotta Distinguished Service Professor of Medieval History and Social Thought, was appointed interim dean of the Divinity School beginning June 1. He succeeds Laurie Zoloth, the Margaret E. Burton Professor in the Divinity School, who will serve as senior advisor to the provost for programs on social ethics.

The Smart Museum of Art is creating a new center aimed at engaging UChicago students, artists, and faculty in “object-driven research”: interdisciplinary research, learning, and conversations driven by the study and experience of original works of art. The Feitler Center for Academic Inquiry, named for Joan Feitler, AM’55, and Robert Feitler, LAB’45, EX’50, will be led by newly appointed director Issa Lampe and will bring more students to the museum as part of their studies. Lampe comes to the Smart Museum from the Yale University Art Gallery.

The University has announced plans to build a new residential hall and dining commons located between Woodlawn and University Avenues, north of 61st Street. The new Woodlawn Residential Commons will open in the 2020–21 academic year and house approximately 1,200 undergraduate students and resident staff in 11 College houses, along with lounges, study rooms, and outdoor spaces. The firm of Elkus Manfredi Architects is designing the facility.

UChicago will wind down its activities at Yerkes Observatory in Williams Bay, Wisconsin, over the next six months and formally cease on-site operations by October 1, the University announced March 7. Since the observatory’s establishment in 1897, Yerkes has been the site of groundbreaking work by scientists such as George Ellery Hale; Edwin Hubble, SB 1910, PhD 1917; and Subrahmanyan Chandrasekhar. The facility was home to UChicago’s Department of Astronomy and Astrophysics until the 1960s. In recent decades the University’s research in observational astronomy has shifted to using facilities located around the world, including the Giant Magellan Telescope in Chile, and in space.

The University of Chicago, President Bill Clinton, and Chelsea Clinton will host the Clinton Foundation’s 11th annual Clinton Global Initiative University meeting October 19–21. More than a thousand undergraduate and graduate students from across the country and around the world will gather to discuss and develop ideas and proposals to address some of the most pressing social, economic, and environmental challenges facing the next generation.

This spring, students, scholars, and artists affected by Hurricanes Irma and Maria were welcomed to work at the University of Chicago as their home institutions were rebuilding. Under a new initiative launched January 24, select undergraduates, graduate students, and faculty spent spring quarter taking classes and conducting research at UChicago. The University will host visiting Puerto Rican artists from May to July.

The University has invested in two start-ups founded by Chicago Booth alumni through the UChicago Startup Investment Program. Foxtrot, a Chicago food and alcohol delivery service founded by Michael LaVitola, MBA’14, received $450,000; Ascent Technologies, cofounded by Brian Clark, MBA’17, and Aaron Droba, MBA’16, which helps users build, manage, and automate their compliance programs, received $315,000. Through the UChicago Startup Investment Program, launched in 2016, the University coinvests alongside established venture funds in start-ups led by UChicago faculty, students, staff, and alumni. The University has set aside $25 million from its endowment to invest in start-ups raising early funding rounds.

Just what the doctor ordered

Ade Ayoola, an Odyssey Scholar and a fourth-year in the College, was selected as one of 49 inaugural Knight-Hennessy Scholars at Stanford University. Ayoola will receive full funding to pursue a medical degree from the Stanford School of Medicine while participating in the scholarship’s global leadership program. A biological chemistry major, Ayoola has worked with the Chicago nonprofit BUILD (Broader Urban Involvement and Leadership Development), which works to increase the educational and career outcomes of at-risk youth, and has studied diabetes in Ibadan, Nigeria, as a fellow with the Center for Global Health.

Lorraine Daston, a visiting professor in UChicago’s John U. Nef Committee on Social Thought and the Department of History, has been awarded the Dan David Prize for her achievements in the research of the history of science. The annual award, which includes a $1 million prize, recognizes scholars for innovative and interdisciplinary research in technological, scientific, social, or cultural fields covering the past, present, and future. Daston, who directs the Max Planck Institute for the History of Science in Berlin, has written on a wide range of topics in the history of science, including the history of probability and statistics, wonders in early-modern science, and the history of scientific objectivity.