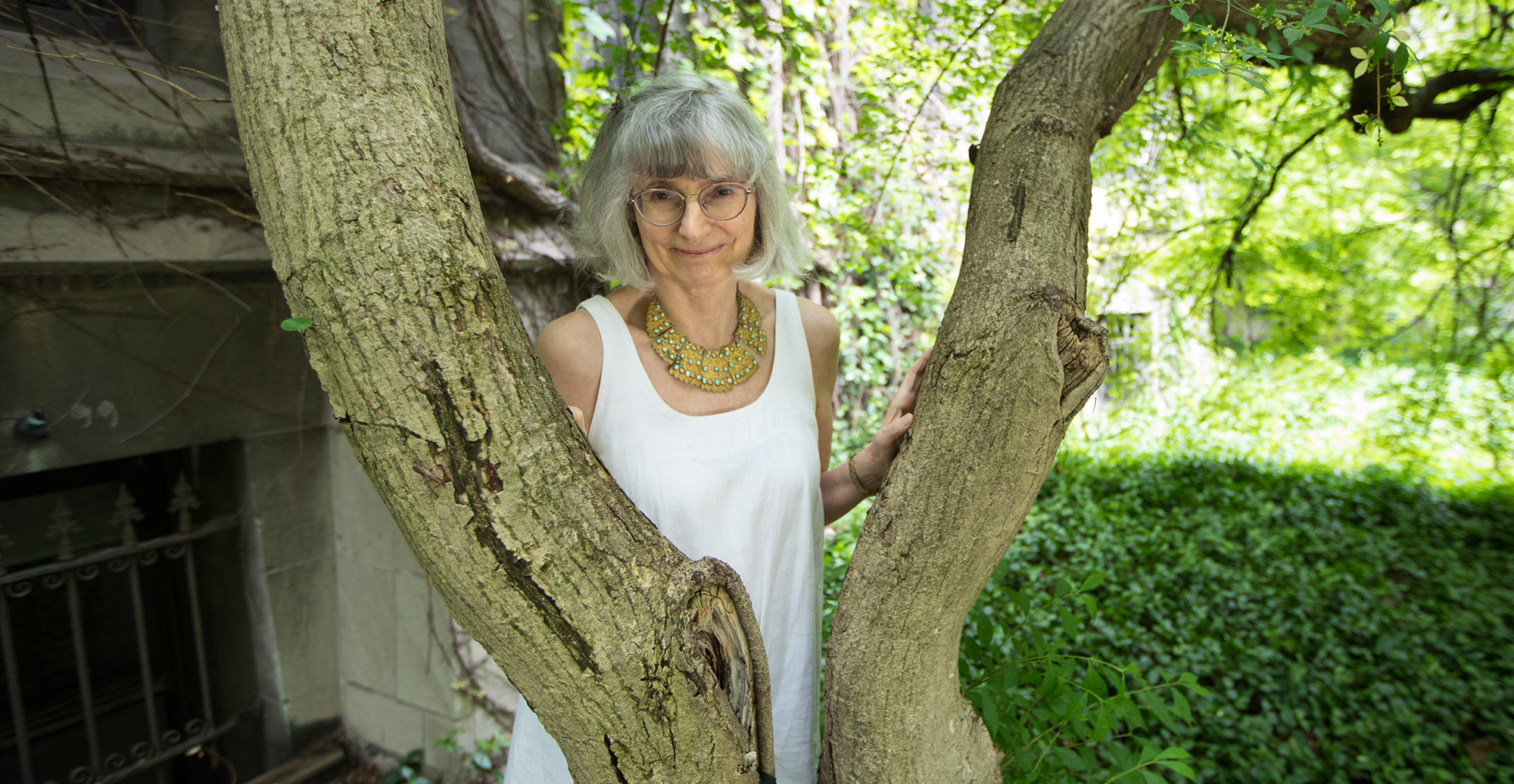 Rosanna Warren is the Hanna Holborn Gray Distinguished Service Professor in the Committee on Social Thought, and a poet and translator whom critics invariably seem to wish more people knew about. (Photography by Ann Ryan)

In 2020 W. W. Norton will publish Rosanna Warren’s fifth book of poetry, So Forth. With the permission of the poet, we share two poems that will appear in the volume

frizzling into crepe. Mirrors multiply
the years: I see you seeing me
in the gilt-framed oval by the desk, I see us both

in the window reflected in the closet door glass.
My eye-corners crease. Flecks of dark chocolate
streak the inner spines of all the books—

words are drugs, love is a drug—while Europe
contracts into dark burgundy upholstery and cushions.
Deep in the French-English dictionary, three asterisks

mark extreme vulgarity. How long
can we stay here? Outside,
the new homeless twist dreadlocks

and pace their mastiffs. Tattoos bulge
on their forearms, paper wrappers
and crushed cans clot the gutter.

Sun leaps off the roof tiles. A brisk
sea wind. In the mountains, those small purple flowers
with pods and curling tendrils (now you tell me) were vetch.

Garnet flashes in the wild turkey’s wattle
as late sun singes the far edge of the meadow.
Lace-work bird-calls unravel little by little
into a frayed cat’s cradle for catching shadow.

Ceremonial as bishops in their jerking strut,
the turkeys process into the transept of white pines
up the slope, where the millefeuille shale lies shut
in an ancient book, all scribbled between the lines.

The yellow fungus arrays its party dress
over petticoat and flounces. It dreams of rot.
The stream, silver-tongued, has more to discuss
as day grows tired and changes the subject, but

only in highlights now, and undertone.
The black bear, on our walk, gave me a hard look,
then lollopped up the hill this afternoon
melting into the grove of beeches across the brook.

We’re all melting. This house is not our own.
Daily, my vision fails. What will it be
no longer to stare at bronze beech leaves strewn
on the loamy floor, at the stream’s currency, not to see

the pearled, shadowless dawn unspool the field?
At the edge of the pond, a single heron stood,
a hieroglyph. I don’t know what he spelled.
And Diana’s last look, just days before she died:

enlarged by disease and sleeplessness, her eyes
searched mine as if across a no-man’s-land,
and as if, by gazing, she could memorize
my face. I gazed back, wordless, stroking her hand.

Evening has settled now in the apple boughs,
the turkeys have gone. A half moon chalks the sky.
The stream keeps lisping the only story it knows,
and a loosened cobweb veils the moon’s eye.

Originally published in the New Yorker.

Read more in “Rosanna Warrenʼs Odes to Woundedness” from the Summer/19 issue.