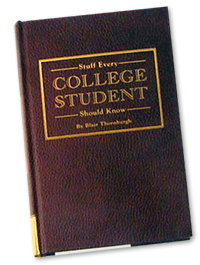 Going away to college is a turbulent experience, as full of apprehension as exhilaration, says author Blair Thornburgh, AB’12. “There are so many things that are changing, and you’re moving away from everyone you’ve ever known, forever," she says. "That’s not going to be easy, but for some reason the popular myth is like, ‘No, it’s going to be a blast, bro!’ And it’s not … right away.” Debunking that myth and making the transition easier is part of what inspired Thornburgh’s first book, Stuff Every College Student Should Know (Quirk Books, 2014). She includes sections on how to write e-mails to professors, various note-taking methods, and decoding the mystery of washing instructions. Her book offers advice on common issues, from how to cope with stress and homesickness to dealing with a bad roommate. An assistant editor of fiction and nonfiction titles for Quirk Books, Thornburgh is also at work on an Elizabethan historical novel. In an interview with the Magazine, edited and adapted below, she discusses her career, campus memories, and the undergraduate lessons she translated into a how-to book.

My boss at Quirk Books said, “We want to do this book about college, do you want to write it?” And I said, “Hmm, I’m not really an expert, I went to college …” But then I thought about it, and I thought: I really like UChicago, but it took me a while to get my bearings, and I wish I had been better grounded in how to navigate that period of adulthood where you’re sort of on your own, but you’re sort of not. And also the nuts and bolts of, “When do you go to class?” I had to call my mom three times the first time I did my laundry. Stuff like that, if you just had it in one place, it would be really convenient.

I think the big parts of this book are me looking back on my college experience and looking at what people actually call “self-care.” You know, making sure your body doesn’t break down. You need food. I sort of thought I could let it fall by the wayside, until I came to my senses and thought, “I’m dying! I’m getting sick all the time!” And also that you can ask for help. That was a foreign concept to me; I really didn’t like it. I had really good RHs and RAs who offered it to me, so eventually I had enough agency to ask for it.

I was just back in Chicago in April to talk to some undergrads in the Medieval Studies program about “life after medieval studies,” and I was the token non-medievalist, because I did not go to grad school. I’m only an armchair medievalist. I read Beowulf at home, but I’m not talking about it. … It’s not that I use those classes on a regular basis, but it’s definitely critical thinking, writing, making aesthetic judgments, but also having a sense of history too, like facts and dates, which I think is important.

Scav Hunt for the soul

You know, whatever makes you feel like humanity is not a total failure, that is what you should do. Some people have religion, or run ultramarathons; I just like to do Scav.

It always baffled me that people would go to the Reg over Harper. If you didn’t need to get a particular book and you were just taking your laptop somewhere, why would you not sit in a cathedral for books?

I remember working on my BA and one of my advisers said that “it sounds like a writer wrote it.” … That was really good for me to hear because I never took creative writing at UChicago or in high school; I was too scared. I wanted to write genre fiction, or YA, or romance, but I didn’t feel that there was a place for me. To hear that made me feel like maybe I did belong at the table of Real Writers.
Arts & Humanities
Books
College students
Interview