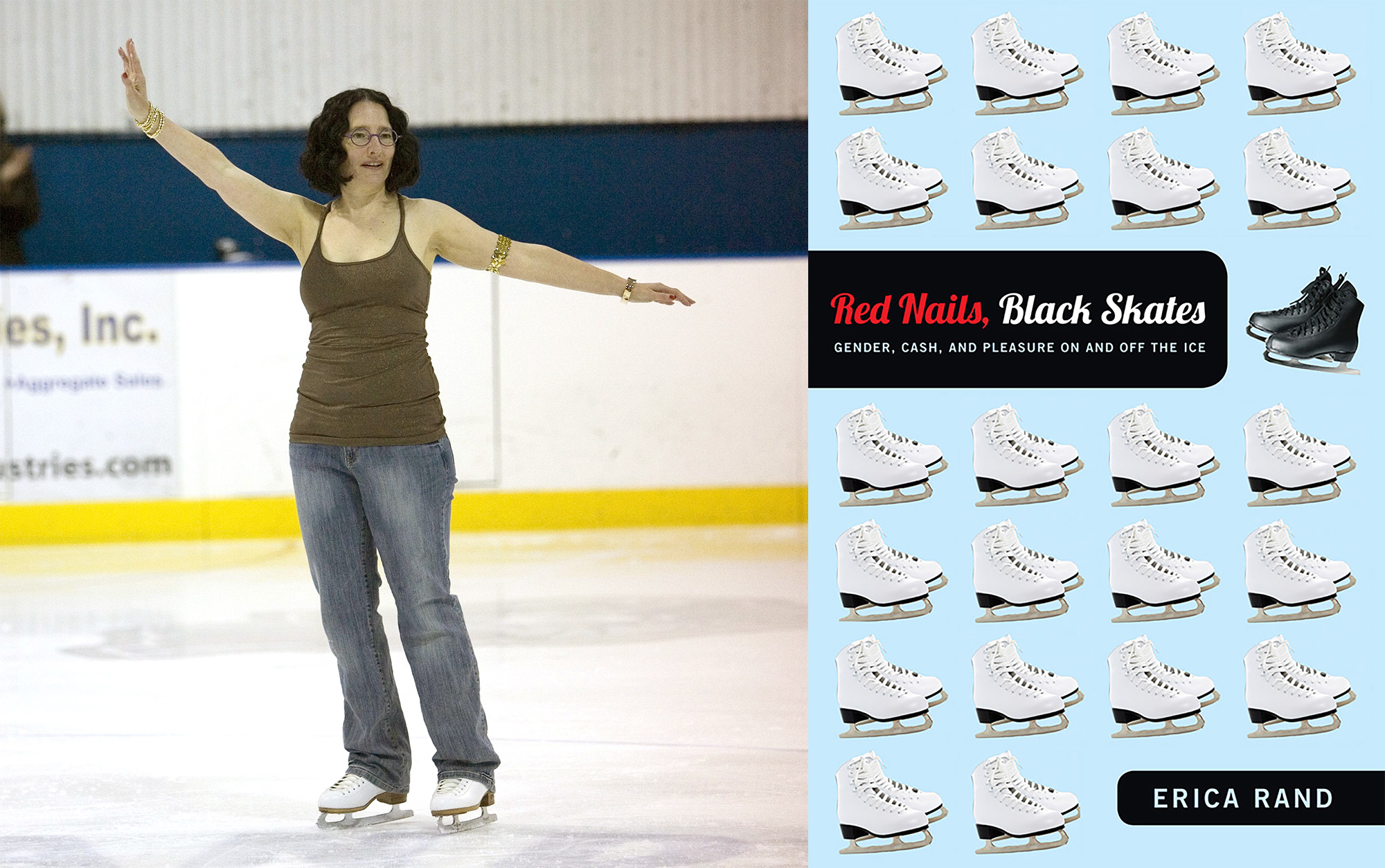 A women’s studies professor finds glitter, grace, and rigid gender roles out on the ice.

A decade ago, at age 43, Erica Rand, AM’81, PhD’89, bought a pair of secondhand figure skates, thinking that a couple of hours at the rink every week might add a little variety to her workout. The sport did more than that: it transformed her life.

Rand soon discovered that with its sparkly costumes and strict rules, figure skating also held an embarrassment of riches related to subjects central to her academic work: gender identity, popular culture, class distinctions, and otherness. So the Bates College professor of women’s and gender studies and art and visual culture wrote a book of essays about her observations and experiences as a self-identified queer femme in a heavily sequined sport.

Part cultural critique, part personal narrative, Red Nails, Black Skates: Gender, Cash, and Pleasure On and Off the Ice (Duke University Press, 2012) contrasts the joy of being on the ice, the wind in her hair, with the ice-skating world’s unfriendliness to people who can’t afford weekly private “ice time” or don’t fit into narrow, “sometimes bizarre and archaic,” gender rules.

Competitive moves that favor grace and flexibility for women and athleticism for men can kill the sport’s magic, Rand writes. So can limitations on what skaters should wear—women in white skates, short skirts, and plunging necklines; men in black skates and clingy spandex costumes in which they’re somehow not to appear gay.

Rand, whose fellow competitors once thought her too daring for wearing a black miniskirt with metal studs and skating to Pink Floyd, would like skaters to be able to express their gender however they see fit. She suggests that the leaders of the skating world “encourage people to dress and move in ways that make them feel happily alive.”

Still, Rand fits in better than some, like the dress-wearing man whose appearance at a rink prompted practice-ice contract forms insisting, “gender-appropriate clothing required.”

Rand interviewed adult competitive skaters at rinks from Portland, Maine, to Portland, Oregon; tried hockey in the hopes of better understanding the appeal of figure skating’s hard-driving relative; and traveled to the Gay Games in search of a “queerer rink culture” and skaters unafraid to be their butch selves during competition. She found some—two women acted out a punk butch/femme romance and a male pair performed a Brokeback Mountain routine using music from the film—but for the most part, she writes, “sexuality and gender at the Gay Games ice rink were just the same as I’d come to expect at home.”

She also set out to make ice-skating more democratic. Having gotten so much joy out of the sport, she says she wants more adults to feel comfortable toddling around on the ice the way she did when she first gave those used blades a spin. “I think that the world of skating needs to pay more attention to people who aren’t trying to be the next Michelle Kwan but are also out there skating,” she says. “One thing I really like about my local rink, it always has been really friendly to people who are serious about their own skating but are not going to be winning a national competition.”

Thanks to good coaches, muscle memory from childhood lessons, and lots of practice, Rand, who’s now in her 50s, is no slouch on the ice. In 2008, she competed in the lowest freestyle category at the US Adult Figure Skating Championships, “the competition around which many serious adult skaters organize their skating,” she writes. She’s brought her classroom talents to the rink too, helping beginning adult skaters as a volunteer assistant coach.

For her part, Rand prefers to twirl around. “I figure skate partly for certain feminine enticements,” she writes in her book. “I love the glitter, the emphasis on grace, and the occasional opportunity to wear a great miniskirt with an apparent purpose other than the pathetic denial of middle age.”

Meanwhile, she struggles to embrace her edginess as well as her femininity within the confines of the sport. For her first five years as an adult skater, she wrestled with the urge to invest in a pair of custom-made black skates; she wanted to be urban and punk rock. (The factory-model skates, sized for male feet, are too ill fitting for her, she says.)

Ultimately, though, she chose white skates, partly because she wasn’t sure she wanted to stand out every single day at the rink. Also, she writes, figure skating brings out her impulse for gender conformity as little else ever has. It’s possible Rand might be better off in roller derby, with its broader sartorial freedom and edgier outfits. But then she’d have to trade in the twirling for shoving. And that’s someone else’s fantasy.