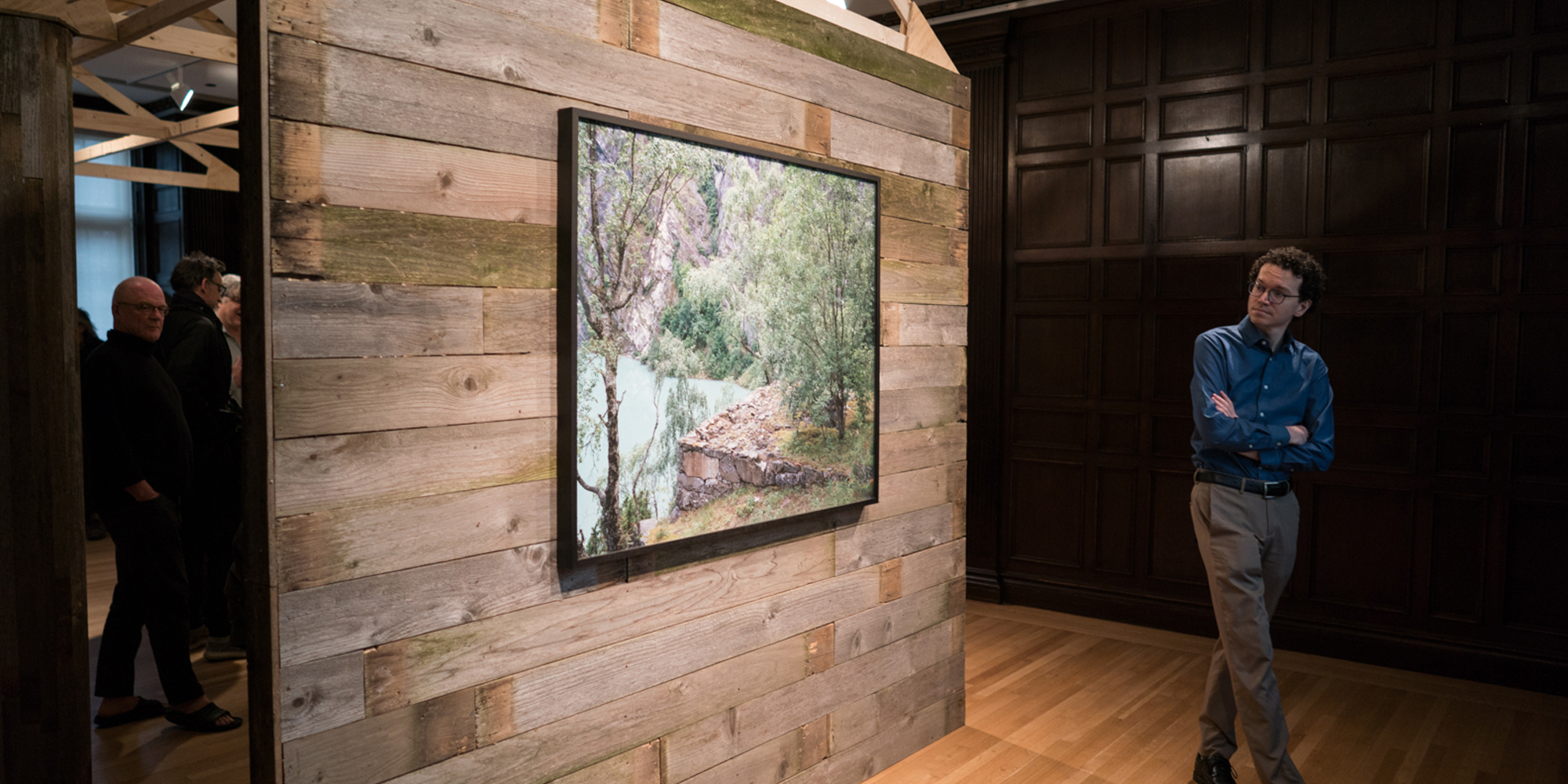 Visitors take in the Hutopia exhibition at the Neubauer Collegium. (Photography by Robert Heishman)

Those of you who think that we’re actually going to build a hut, I’ll have to disappoint,” Dieter Roelstraete tells the 12 or so students who have arrived at the Cochrane-Woods Art Center on Monday, April 1, for the first day of A Curating Case-Study: The Hut. When one student points out that a construction project was mentioned in the course description, Roelstraete wryly informs her that it will be “spiritual construction work,” adding, “We’re not going to build a hut, because I wouldn’t know how to hold a hammer.”

A tall bearded man with a hard-to-pin-down Continental accent (Belgium!), Roelstraete is the curator at the Neubauer Collegium for Culture and Society. He designed the course as a companion to an exhibition he is curating at the Collegium through September 6. Titled Hutopia, it features models of the real or imagined retreats (“huts”) of three giants of 20th-century philosophy: Ludwig Wittgenstein, Martin Heidegger, and Theodor Adorno. Hutopia follows up Roelstraete’s 2018 exhibition in Venice, Machines à penser (“machines for thinking”), and it asks the same question: How do our living spaces shape our thinking?

It’s an idiosyncratic course—what Roelstraete calls “an art-meets-philosophy course in the architectural context of a hut”—and the students are an eclectic group as well. About half are graduate students. When Roelstraete asks for introductions, they list fields including art history and philosophy but also social work, neuroscience, and molecular engineering. If a classroom is a machine for thinking, this one has an interesting set of moving parts.

That Roelstraete likes to introduce topics by testing the students’ knowledge (Who recognizes this building? Who has read Adorno?) might seem intimidating if he were not also, disarmingly, a big fan of birthdays. He opened the class by projecting an image of 19th-century French writer Joseph de
Maistre—because it’s his birthday. “Every morning I wake up—whose birthday is it today?” he told the students.

Who is this hutty professor?

Roelstraete explains that, before joining the Neubauer Collegium two years ago, he worked on the curatorial team of Documenta, an exhibition of international contemporary art held every five years in Kassel, Germany. Prior to that, he was a curator at institutions including the Museum of Contemporary Art Chicago. Teaching is newer to Roelstraete than curating; he is up front with the class that it is only his second time teaching a formal academic course, saying that it will be an “experimental enterprise.”

He begins by walking the class through the lives, works, and housing preferences of the course’s three philosophers. Going by birth order (obviously), he first discusses Wittgenstein, the neurotic Austrian polymath who, upon becoming obsessed with a logical paradox, abandoned his career as an aeronautical engineer, came under Bertrand Russell’s tutelage, and retreated to a cabin at the edge of a Norwegian fjord to attempt to solve all philosophical problems through logical clarification. One early result of this effort was the 1921 work Tractatus Logico-Philosophicus, whose mysterious passage 6.44 is cited in a tattoo on Roelstraete’s left shoulder. (He mentions his ink but doesn’t show it.) The passage reads, “Not how the world is, is the mystical, but that it is.”

Roelstraete turns to Heidegger by projecting a 1933 or 1934 image of the German philosopher, who sits unsmiling before a wall of books and averts his eyes from the camera. “So what do you think is the punctum here?” he asks the class, explaining Roland Barthes’s term for a striking detail that establishes a connection with the viewer. “The mustache?” a male student guesses. “Good, close,” Roelstraete responds. Heidegger’s dark, short mustache may call to mind the ascent of Adolf Hitler and the Nazis at that time in Germany, but it is the philosopher’s lapel pin—with a Nazi eagle insignia—that Roelstraete sees as crucial. Notoriously, Heidegger was the most prominent German intellectual to align himself with the Third Reich, something for which he never publicly apologized.

Heidegger had a small ski hut built in his native Black Forest region, where he worked on his 1927 magnum opus, Being and Time, and returned throughout his life. If Wittgenstein’s hut was for escaping home—especially the distractions of his wealthy upbringing and bourgeois academic career—Heidegger’s hut was for feeling at home. He even claimed in a 1934 essay that his philosophy belongs to the Black Forest inextricably, much as the work of its peasant farmers does. Such rhetoric raises deep questions for the course. How does love of hut and homeland, not to mention fatherland, shape one’s philosophy, or possibly taint it?

As for Adorno’s hut, it doesn’t exist. Or rather, it exists only as a sculpture, Adorno’s Hut, by late Scottish artist Ian Hamilton Finlay (the father of Hutopia artist Alec Finlay). Roelstraete takes this abstract doghouse-size structure to be a kind of visual joke, since the leftist cosmopolitan Adorno—who once dedicated an entire book to criticizing Heideggerian ideas about authenticity—was “the last philosopher in the world who would be caught dead in a hut.”

Roelstraete projects an image of the white two-story Los Angeles house where Adorno lived in the 1940s, not far from other Weimar-era German exiles such as Bertolt Brecht and Arnold Schoenberg. Adorno, like Wittgenstein, came from an assimilated partially Jewish family and had to flee Nazi rule. Thus, Adorno’s home in LA, if not a hut, was still a retreat.

Class wraps up with a trip to the Neubauer Collegium on the corner of 57th Street and Woodlawn Avenue. Here the students see Roelstraete’s exhibit Kleine Welt, which ponders how specific artworks—by Paul Klee especially—have become ubiquitous on academic book jackets. That exhibition will soon make way for Hutopia. Outside, Chicago artist John Preus, MFA’05, has already completed a half-size model of Wittgenstein’s cabin on the patio.

Roelstraete and his class walk the few blocks back to the Cochrane-Woods Art Center and wrap up for the day. The students exit the room that will be their hut for the quarter—a hut for reflecting on huts—and make their way to their next classes, their homes, and their homes away from home.

Students read works by Wittgenstein, Heidegger, and Adorno; gave group presentations on the philosophers’ lives and works; and visited Hutopia for its opening on April 25 (the eve of Wittgenstein’s 125th birthday, Roelstraete pointed out in his welcoming remarks). They completed a final project of spiritual construction work in the form of a philosophical guide to the hut of their dreams.

Read more in the web exclusive “Head Space” and “A Hut of One's Own” from the Summer/19 Core.