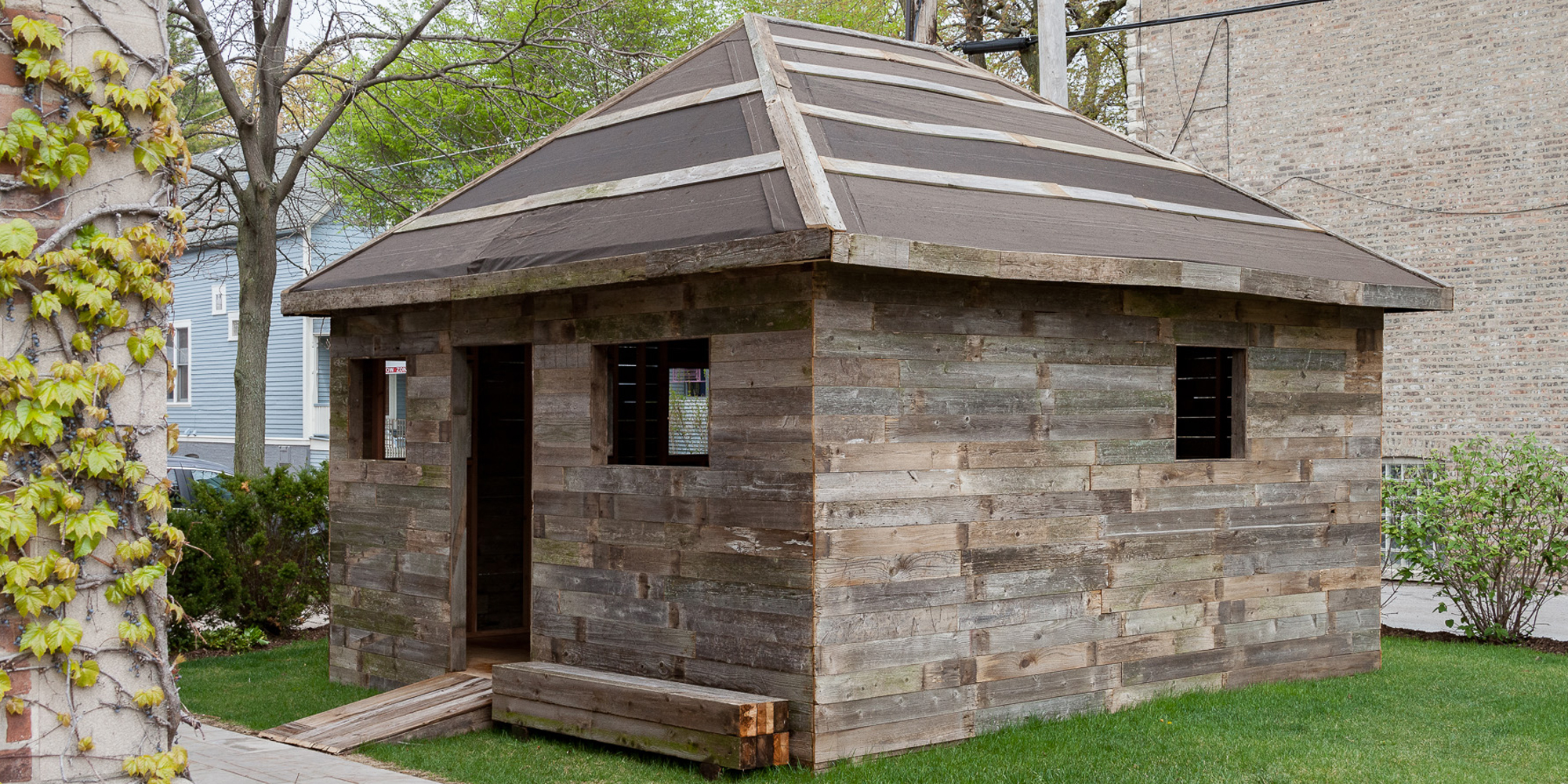 A nearly full-size replica of the Black Forest ski hut where Martin Heidegger worked on his 1927 book Being and Time sits on the lawn of the Neubauer Collegium for Culture and Society as part of the Hutopia exhibit.  (Photography by Robert Heishman)

This spring and summer the Neubauer Collegium explored philosophers’ retreats and the idea of home in an exhibition, event series, and course.

The Neubauer Collegium looks like a strange settlement camp these days, flanked on two sides by modest single-room wooden huts. Both are publicly accessible, but the one on the lawn is particularly easy to scope out: any time, any day, you can enter the small square building from 57th Street, sit on its bare floor, and stretch your arms through its glassless windows.

The huts are not the next wave in student housing. They are part of an exhibition titled Hutopia, curated by Dieter Roelstraete, which runs through September 6. Named for a poem by contributing artist Alec Finlay, Hutopia reimagines the living spaces (“huts”) of three major 20th-century philosophers: Ludwig Wittgenstein, Martin Heidegger, and Theodor Adorno. The point of the exhibition—and Roelstraete’s related course—is to ask how buildings shape thought.

The huts of Hutopia, designed by Chicago artist John Preus, MFA’05, represent buildings with impressive CVs. The square building on the back lawn, mentioned above, is a nearly full-size replica of the unassuming Black Forest ski hut where Heidegger worked on his 1927 book Being and Time, an effort to recover an ancient line of questioning about the fundamental nature of existence. On the front patio stands a half-size, dollhouse-like model of the remote Norwegian cabin where Wittgenstein penned much of his landmark 1921 work Tractatus Logico-Philosophicus, an ambitious attempt to clarify all philosophical problems through strict logical analysis.

These canonical works have inspired students and scholars—including Roelstraete, who studied philosophy at the University of Ghent in his native Belgium—for nearly a century. Countless readers have also squinted at each work and then given up, and many scholars would gladly embrace one of them and throw the other in the garbage. (Philosophy does have camps.)

The hut triumvirate is completed by a deconstructed cabin-like structure inside the Neubauer Collegium’s gallery space, which is surrounded by (and partially covered with) the photography, sculptures, and other artworks that round out the exhibition. This piece is an interpretation of a much smaller sculpture by Scottish artist Ian Hamilton Finlay titled Adorno’s Hut, viewed by Roelstraete as an ironic statement since Adorno is “the last philosopher in the world who would be caught dead in a hut.” Having been driven from Germany by National Socialists propounding romantic ideas about “blood and soil,” Adorno found the idea of the simple life inherently suspicious.

What we get of Adorno’s actual living quarters is a photograph of the unremarkable white house in the Brentwood neighborhood of Los Angeles where he worked with fellow Jewish exile Max Horkheimer on the 1944 book Dialectic of Enlightenment. A classic of Frankfurt School critical theory, the book argues that the rise of totalitarianism was a failure of Enlightenment rationalism and describes a “culture industry” in capitalist societies that implants and manipulates desires in a pliant citizenry.

If Adorno sounds cynical, consider that the Black Forest–dwelling Heidegger was a member of the Nazi party who actively promoted their cause as rector of Freiburg University from 1933 to 1934. Hutopia includes a number of black-and-white photographs taken of Heidegger in his ski hut for a 1966 interview with Der Spiegel in which he discusses—but does not apologize for—his role in the Third Reich. Here the philosopher can be seen performing the simple life for the camera.

On May 9 Katherine Withy, PhD’09, gave a talk on Heidegger at the Neubauer Collegium, followed by a response from UChicago provost Daniel Diermeier, who discussed a pilgrimage he made to Heidegger’s hut as a philosophy-obsessed teenager. Withy claimed that Heidegger is in denial about being uncanny—literally unheimlich or “unhomely” in German. That is, he was at home in his hut but not really, because you can never return home unchanged. Having essentially become a middle class academic, he was perhaps trying too hard to belong to the countryside of his youth.

A photograph of the stone foundation on which Wittgenstein’s Norwegian cabin used to stand (and is now being rebuilt) occupies a wall in the gallery. If Heidegger’s ski hut represented nostalgia for home, Wittgenstein’s cabin represented the opposite. As biographer Ray Monk explained in a talk at the opening of Hutopia on April 25, the Viennese philosopher who was born into ostentatious wealth—Brahms premiered pieces at his palatial childhood home—had a profoundly ascetic streak. Thus, he gave away his vast fortune and escaped to his spartan cabin for periods of time to contemplate logic. The cabin is also where he brought a series of younger men he was romantically involved with over the years, at a time when being with them openly was not an option. In this way, Wittgenstein’s retreat was, like Adorno’s, a place to avoid persecution.

Hutopia may call to mind the cliché of the isolated genius, but the exhibition challenges and complicates the idea. It represents buildings that were homes, exiles, and retreats, often shared with intimate others and always in communication with the outside world.