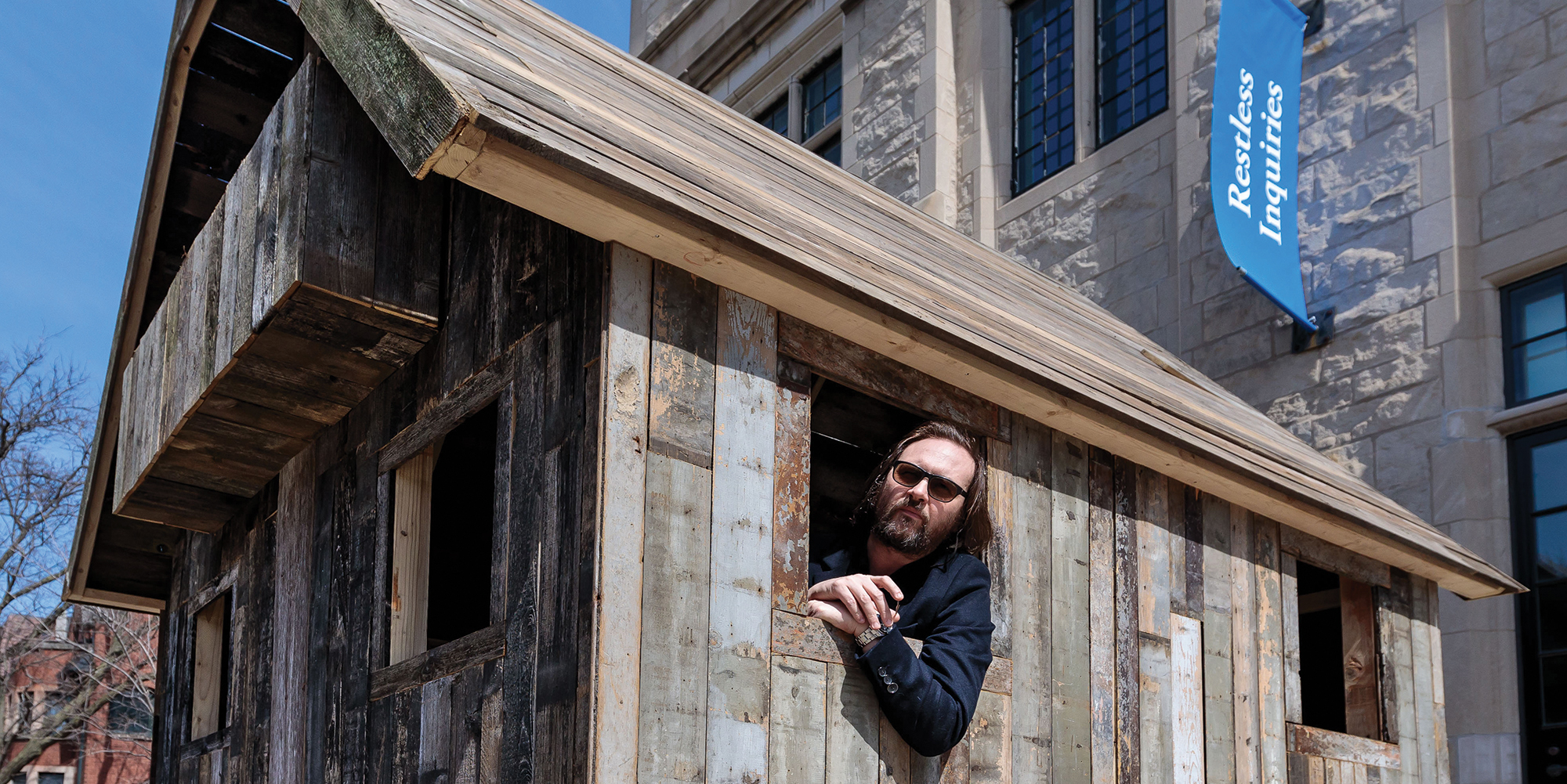 Dieter Roelstraete inside the model of Ludwig Wittgenstein’s hut at the Neubauer Collegium. “It’s almost like a dollhouse or dog house,” he says. “There’s an element of irreverence. A slight intent to deflate.” (Photography by John Zich)

A hut of one’s own

Dieter Roelstraete on philosophers and their man caves.

In April, two curious wooden structures materialized outside the Neubauer Collegium. On the patio, overlooking the busy corner of 57th Street and Woodlawn Avenue, is a scaled-down model of Ludwig Wittgenstein’s remote hut near Skjolden, Norway. In the backyard stands a similarly diminutive replica of Martin Heidegger’s Black Forest hut near Todtnauberg, Germany.

The huts, built by artist John Preus, MFA’05, are part of Hutopia, a “compressed version” of an exhibition that curator Dieter Roelstraete organized for the 2018 Venice Architecture Bienniale. During spring quarter Roelstraete taught an art history course, A Curating Case-Study: The Hut, about (and occasionally in) the exhibition. Read more in the Summer/19 University of Chicago Magazine.

How did you come up with this idea?

It’s an old dream. I studied philosophy at the University of Ghent in the early ’90s. The three philosophers who are the heart of this exhibition, [Theodor] Adorno, Heidegger, and Wittgenstein, have all shaped my curatorial practice and my writing practice. They’re my guys.

Wittgenstein and Heidegger were born months apart in 1889. Both of these bizarre characters built themselves huts around the same time. When you go to the village in Norway that Wittgenstein escaped to, you understand that here is somebody who is turning his back to the world. When you go to the village in the Black Forest that Heidegger so very dramatically retired to, you understand it’s more of a performance, which is interesting for the philosopher of authenticity.

Heidegger’s hut is still standing. It’s in the hands of the Heidegger family, who are notoriously reclusive.

His family is reclusive, but he wasn’t?

He acted the hermit. He died in 1976. His children then inherited this holiday home. I think it’s now primarily used by the grandchildren.

There’s no emailing or calling the Heidegger family to try to get access to this hut, which is a very important structure where he hashed out Being and Time (1927). It’s puzzling that the family should be so inhospitable, but it has to do with his Nazi past.

I believe where you think shapes what you think. It seems self-evident, but there’s a long history in the philosophical discipline of mistrusting biography.

How does Adorno fit in?

Probably 10 years ago, I was leafing through a history of installation art, and I came across this picture of a peculiar sculpture by Scottish artist Ian Hamilton Finlay, Adorno’s Hut (1989). Seeing that, a curatorial argument started to fall into place.

The first time I tried to visit Heidegger’s hut, I couldn’t find it. It proved to be this elusive ghost. I finally managed in 2017. You have to make your way underneath barbed wire. Literally hundreds of people go see this hut every year and do the same thing—basically trespass.

I went to visit Skjolden. Wittgenstein’s hut no longer exists. I also traveled to LA to see where Adorno lived in exile in the 1940s after the Nazis seized power.

A nondescript bungalow in Brentwood. A photograph will be in the exhibition.

Of course there’s a variety of reasons why I’m interested in these huts.

On the surface—and this is why it originated in the lap of the Architecture Bienniale—it’s about a very primitive architectural form. The blueprint of the hut is the source of all architecture, right?

It’s also about the mirage of escape. The dream of withdrawal. Which we all crave. Who wouldn’t want to be in the woods for a week? But escapism is an irresponsible stance.

We all know the philosopher’s hut is a man cave. These men are intellectual giants, philosophical giants, but they were also humans, and, it seems, terrible failures at being human. So this is not a celebration of these huts. It’s also not a denunciation.

Where do you do your own thinking?

This sounds corny, but I like to walk, which is a very philosophical enjoyment. Nietzsche was a famous walker. Kant, Schopenhauer, Rousseau. Not just anywhere—not on some freeway in LA or something.

Can people go in the huts to philosophize?

You can. Wittgenstein’s hut is going to have two chairs in it. Probably wooden chairs from Chicago Public Schools, courtesy of John Preus, who has a massive stack of them in his studio. [In 2013, then-mayor Rahm Emanuel closed nearly 50 CPS schools; Preus salvaged some of the furniture.] For those who want to think about the fate of public education, they’re welcome to do so in Wittgenstein’s hut.

Why two chairs? Shouldn’t there be one?

This is a train of thought I owe to Finnish philosopher Thomas Wallgren. His critique of Machines à penser [the exhibition at the Venice Architecture Bienniale] was there is inevitably an element of celebration in highlighting isolation. True philosophical thought is dialogical.

Obviously the corner of 57th and South Woodlawn is incomparable to the village in Norway where this hut arose, but you can just sit there and ponder if you want.

Do you have to make a reservation?

No. With Heidegger’s hut, you can walk in from the street. It is technically available for homeless people. We’ll see. This is an exhibition about shelter and seeking shelter for thought. A door and a lock would have felt wrong.

These huts are very rudimentary remakes. They’re platonic reductions. My hope is that philosophy nerds will walk by and say, “Hey! That’s Heidegger’s hut!”

Read more in “Hermit Philosophy” from the Summer/19 Magazine and in the web exclusive “Head Space.”