A squirrel and gargoyle walk into Jimmy’s ...

The winners of the Magazine’s joke contest.

Not all of the entrants to the Magazine’s joke contest actually provided a punch line to that prompt, but most of the submissions riffed on the idea. Contest winner Kyle Mangan, AM’11, provided the cartoon seen below. (If it has you scratching your head, have a glass of water to prove that you too have a “drain spout.”) 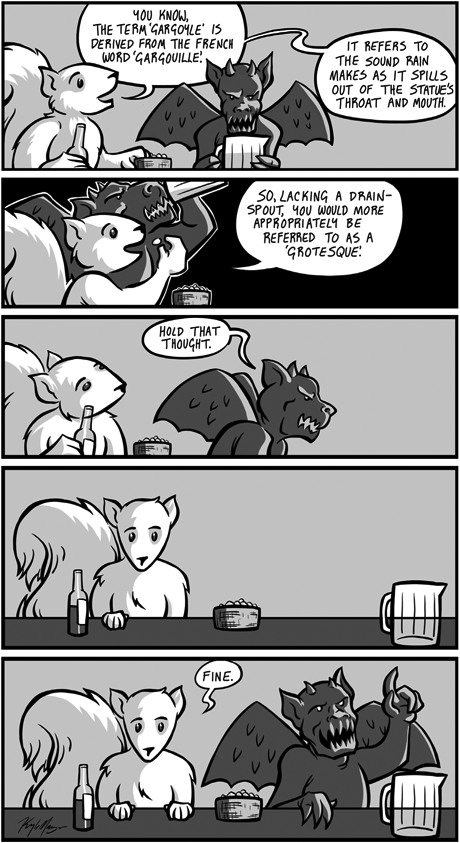 The runners-up below also amused the editors. All three submissions won their writers a University of Chicago sweatshirt. Thanks to all who entered.

A squirrel entered Jimmy’s, hopped onto a barstool next to a good-looking gargoyle, and asked, “What’s a nice ’goyle like you doing in a place like this?”—Judy Culley Rehnquist, AB’54

A squirrel and a gargoyle walked into Jimmy’s. The gargoyle said to the squirrel, “Having just read the Nichomachean Ethics, I have decided to buy you a drink—not for the sake of the pleasure such an act of generosity will bring me, but because I desire that ours be a friendship of the good, and so I will henceforth demonstrate myself to be the very embodiment of your highest aspiration.” The squirrel replied, “Are you nuts?”—Brian Avery, AB’04

Arts & Humanities
Lite of the Mind