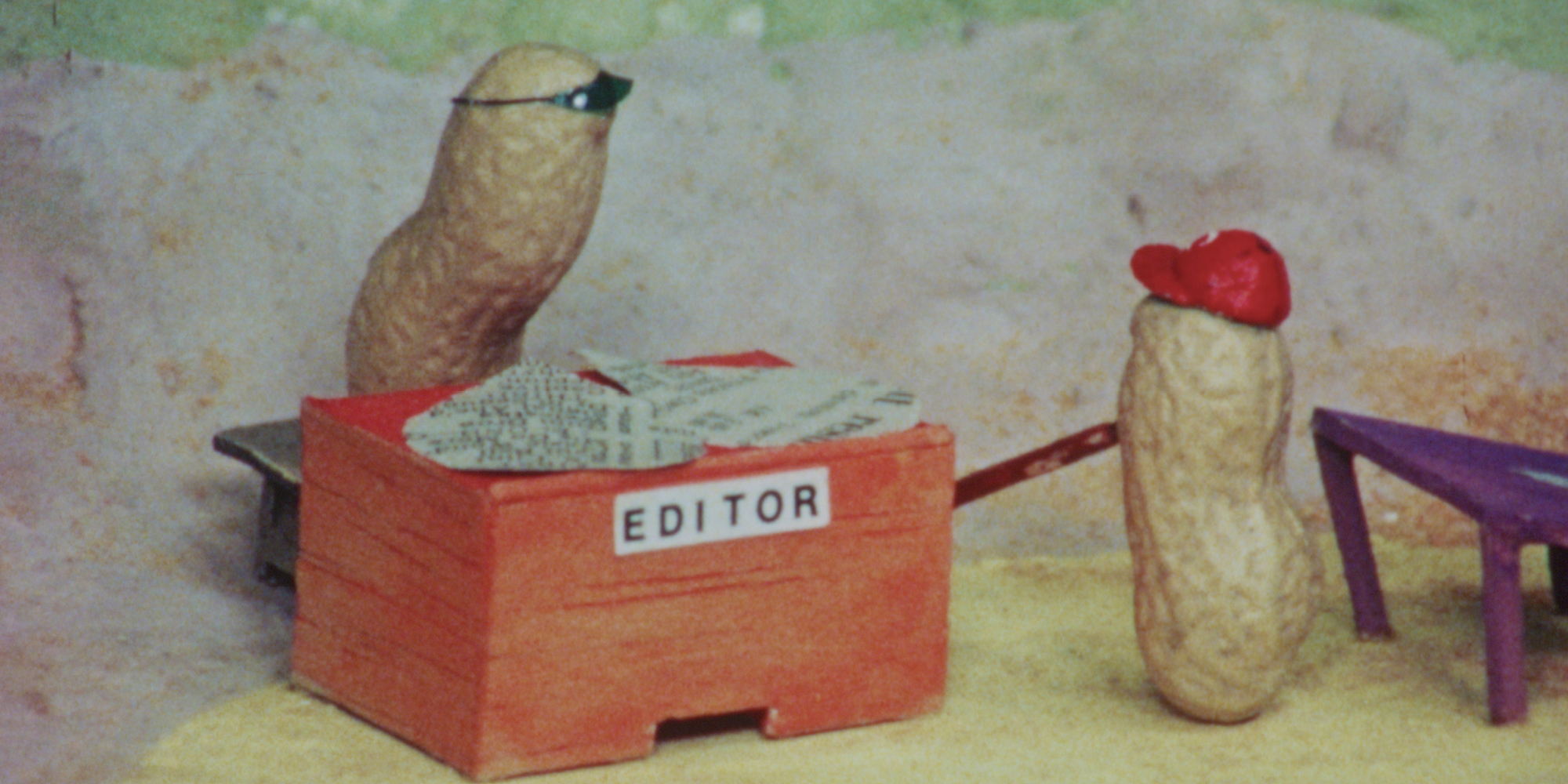 In these animated movies for kids, peanuts are the stars

The work of Ron McAdow, AB’71, who found levity in legumes, had a recent screening at the Museum of Modern Art.

“Are the peanuts going to eat the fork?”

That possibility weighed heavily for one little girl at New York’s Museum of Modern Art on a Saturday afternoon in February. She (presumably accompanied by a primary caregiver or two) was there for Family Films: Not-So-Ordinary Objects, a bill of four shorts that, along with early Pixar effort Luxo Jr. (1986), included Hank the Cave Peanut (1974), in which a pith-helmeted legume leads a successful hunt for an untamed fork.

This empathy for flatware was new—and “very comical”—to Hank’s director, Ron McAdow, AB’71, who was on hand at MOMA for a post-screening Q&A. He was on firmer ground with more technical questions: Did he use a green screen? No, and in his day they used a blue screen.

McAdow didn’t enter the College planning on a career in animation. It was more by a process of elimination that he arrived there. He liked to write but didn’t want to major in English or study writing. “I thought I might become an academic of some kind, in anthropology or some other social science field,” he says, but a student job in the sociology department convinced him otherwise.

Then McAdow spent a summer back home in Champaign, Illinois, filling potholes—a “fun” job, he claims—with a high school friend, Kevin Brown, who had recently gotten into object animation using a Super 8 camera. When the two were laid off with plenty of summer left to fill, they got serious about messing around with Brown’s new toy. McAdow returned to the College that fall with his own used camera. Soon the Super 8 movies he was making in his Hyde Park Boulevard apartment were a hit on the student party circuit. By the time McAdow graduated, he and Brown had moved to Cambridge, Massachusetts, and been “invited to hang out our shingle as filmmakers for children,” creating short segments for the television show Jabberwocky.

Over the next several years, as they plugged away on the show, McAdow made two longer shorts, Hank—which led to a gig on the math-oriented program Infinity Factory—and Captain Silas (1977). (Both can be found on YouTube.) Peanuts were the anthropomorph of choice because they come in different “skin tones” and sizes and—most important—have a natural bump of a nose, so “you didn’t have to paint any eyes because people just project a face onto them.” (McAdow learned only later that rounded shapes work better in animation. “Mickey Mouse,” he notes, “is just a bunch of spheres.”)

In the late ’70s, McAdow began “working directly with children instead of through films,” including several years teaching English, math, science, and history to elementary and middle schoolers. He kept the creative fires stoked through writing: a newspaper column, canoeing guides to the Sudbury and Charles Rivers in Massachusetts—Hank includes a nod to McAdow’s lifelong passion for paddling—and two novels.

A subsequent career in educational software helped him keep abreast of the latest digital tools. He now applies those to creating animated backdrops to the stories he tells each fall at a wildlife sanctuary near his home—an alternative for “families that want to do something besides go to the mall the day after Thanksgiving.” His latest tale, “The Sky Worm,” is peanut-free, and no forks are harmed.