I’ve always found the notion of a “sister city” curious. These relationships have always struck me as, well, arbitrarily chosen. Chicago, for instance, has a mind-boggling 28 sister cities, the same figure as Los Angeles; New York, in contrast, only has 13. Milan’s a member of Chicago’s posse, but not Naples. Moscow, but not St. Petersburg. Delhi, not Mumbai. Of Chicago’s 28, this lifelong Chicagoan has been to a whopping total of three: Shanghai, Paris, and Toronto. What’s really the logic behind these 28? This past Friday, I went to the Chicago Sister Cities International seventh annual festival to find out. This year’s event, held this past week at Daley Plaza, featured the typically dazzling array of vendors and multicultural performances. 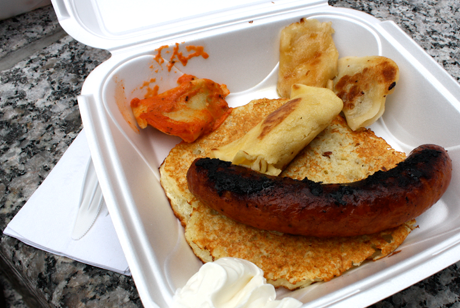 The “Polish Plate” from Kasia’s Deli, representing Warsaw (and a gift to my stomach): 3 pierogies, a Polish sausage, a giant potato pancake, and a blintz. Warsaw, to my surprise, was Chicago’s first sister city, established in 1960 by Mayor Richard J. Daley. His intentions were rooted in local politics, not global ambitions; his eyes were set on strengthening the ties between his Democratic machine and Chicago’s sizable Polish American community. 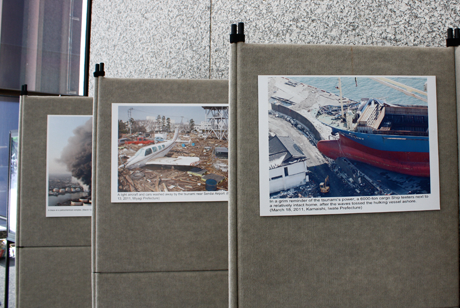 Osaka, Japan’s second most populous prefecture after Tokyo, became a sister city in 1973 along with Milan. Like many of the other 28, Osaka is the second most populous city of its country; though Chicago is now the third most populous city in the United States, after New York and Los Angeles, it was the second most populous until the ’90s and considered by many to be the second most “influential” city in the United States. Inside the Daley Center, I encountered the photo exhibition Kizuna: The Bonds of Emotion, organized by the Osaka Committee of Chicago Sister Cities International and Japan America Society of Chicago. The exhibition featured photojournalism from the Japanese newspaper the Nikkei in the aftermath of the March 11, 2011, earthquake and tsunami, including ongoing recovery efforts. Though rather modestly displayed, a powerful narrative of resilience unfolded in 46 images. 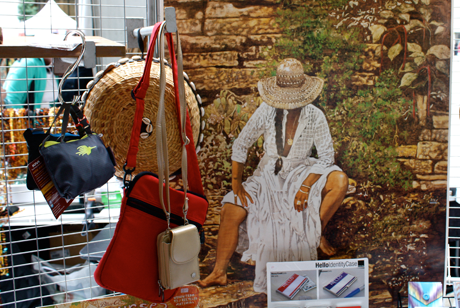 Assorted trinkets at the vendor What the Traveler Saw, representing Casablanca, Morocco. From the mid-1960s to 1980, only a few Moroccans made their way to Chicago—usually scholars seeking technology and science degrees. But in the 1980s, many Moroccan immigrants arrived seeking work, and in 1982, Casablanca became a sister city. By the end of the decade, Chicago’s Moroccan population had grown and defined itself. 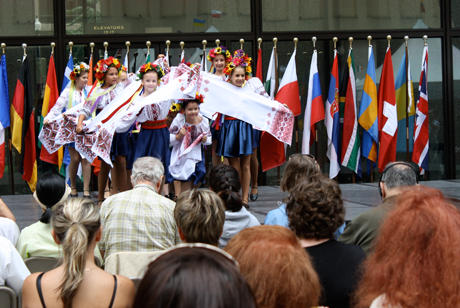 Young dancers performing in vyshyvanka (Ukrainian traditional clothing) from the School of Ukrainian Dance, representing Kyiv, Ukraine. As with Warsaw, the logic underlying Kyiv’s sister status—established in 1991—is the strength of the Ukrainian population in Chicago. With an estimated 10,000 Ukrainian American residents, Chicago’s Ukrainian Village neighborhood has been the central hub of Ukrainian life since the turn of the century with three major Orthodox churches, banks, a grammar school, the Ukrainian National Museum, a Ukrainian Cultural Center, two Ukrainian youth organizations, and numerous restaurants, stores, and businesses. 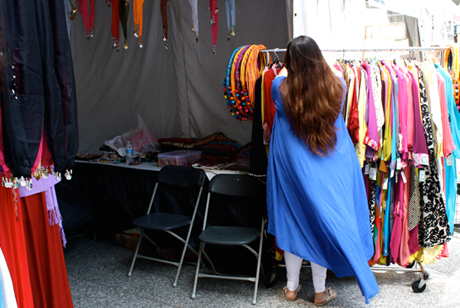 I caught the Pakistan Fashion Lounge just as a breeze blew through, carrying the skirt of the vendor’s salwar kameez along with it. Lahore, Pakistan, became a sister city in 2007. Lahore and Chicago bear the nicknames “City of Gardens” and “City in a Garden,” respectively. 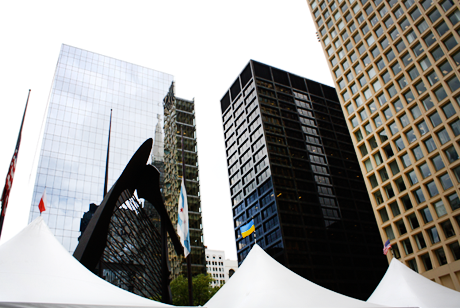 As I was leaving, I looked up to see flags from Poland, Ukraine, and the United States puncturing the sky. Chicago’s flag, meanwhile, took a backseat with Picasso.
Arts & Humanities
City of Chicago