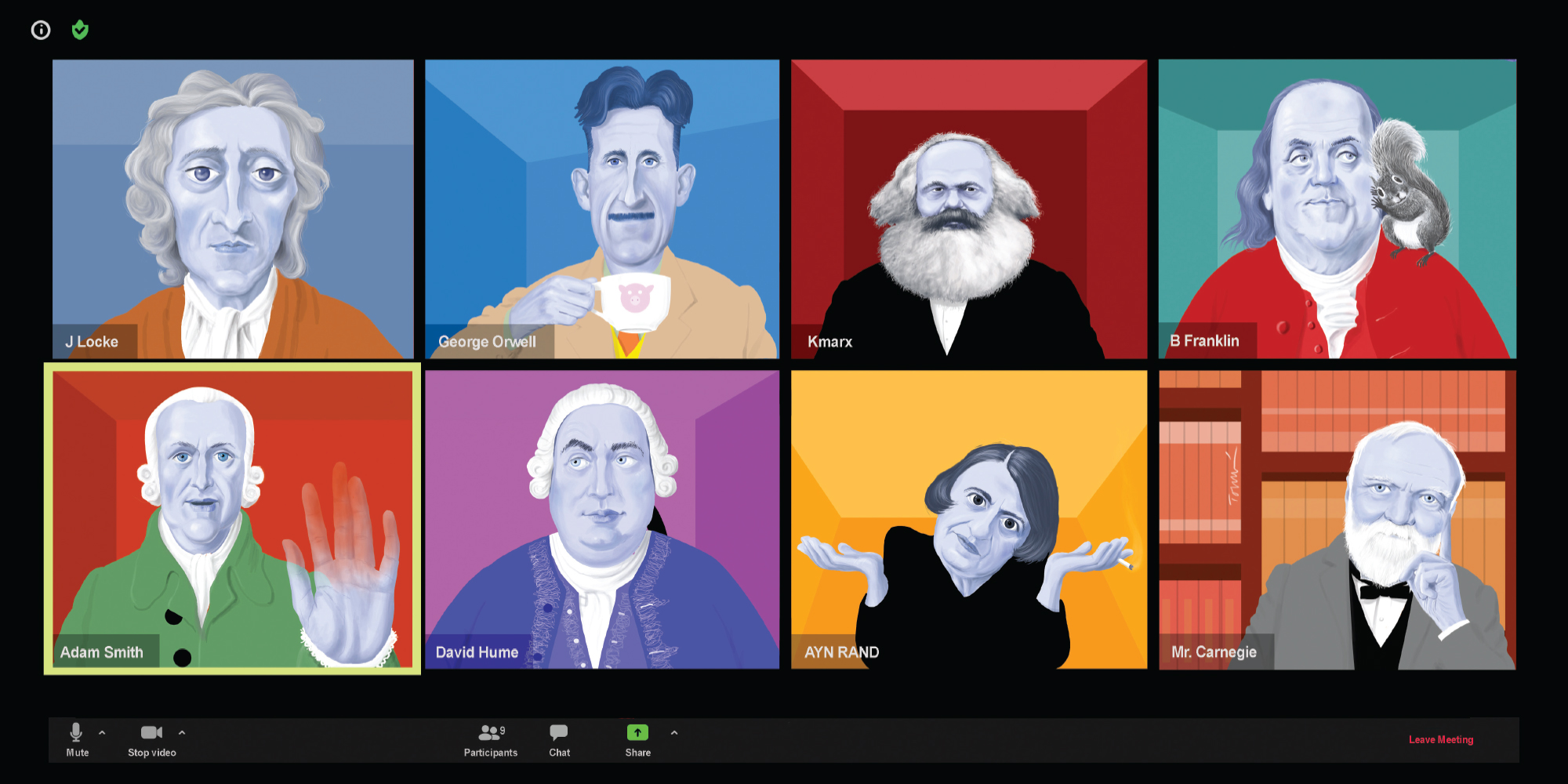 By
Author
John Paul Rollert, AMʼ09, PhDʼ17
|
The University of Chicago Magazine
—
Summer/20

Moral uncertainty is fuel for the fire of a conversation about business ethics, and it has been ample in the age of COVID-19. If the spring was a miserable merry-go-round of unlikely events—economic calamity, civil unrest, home confinement, all while the plague advanced—the upshot for Ethics of Business, a class I’ve taught for eight years, was a special sense of urgency about the uncertainties of capitalism.

The questions abound in this class. What are the responsibilities of great wealth? Can the acquisitive instinct be squared with civic-mindedness? When should greater efficiency and productivity stand aside for concerns of equity and justice? And, perhaps most pressing, how reliable, morally and practically speaking, is the motive force of the modern economy?

That force, of course, is self-interest, the pursuit of which is a central subject in my class. To understand why people came to embrace capitalism, you have to tell a story about the moral alchemy that saw self-interest transformed from a malign motive to the most unlikely agent for the common good. It’s a tale that takes shape in the 17th and 18th centuries with the philosophical inventiveness of thinkers like John Locke, David Hume, and, most importantly, Adam Smith.

For some of the Booth MBAs in the course who are attending classes part time in the evenings while meeting workaday demands of midcareer professionalism, Ethics of Business serves as a first brush with such legendary figures. It also acts as an introduction of sorts to the origins of an ideology most of them hold dear (while also giving them sustained occasion for second thoughts).

There’s good reason for second thoughts in the midst of a pandemic. “There is a special place in hell for those who are price gouging,” one student wrote on the class blogs that host the weekly writing assignments. These blogs, in addition to the small discussion sections I held in the evenings on Zoom, provided a ticker tape of sorts for the daily developments of the crisis and a way of gauging their immediate impact on my students. “Is it ethical” for “taxpayers to bail out these companies without additional upside for their trouble?” one student wrote when the discussion turned to the Coronavirus Aid, Relief, and Economic Security Act, the $2 trillion March stimulus bill, while another student wondered whether the fillip he received could be squared with a spirit of fairness. “I felt a momentary positive surprise,” he wrote, when his $1,200 check arrived in the mail, “but it turned sour pretty quickly because I strongly felt I did not deserve [it].”

In April and May, as unemployment numbers soared, class conversation consistently returned to those who weren’t working, those who were, and the harrowing inequities among both cohorts. “It is the working class—both those considered essential who continue to be exposed to the virus and those who have lost their jobs and have no money to survive on—who are suffering the most,” one of my full-time MBAs observed. He, on the other hand, had “an unusual ability to focus on [his] classes (due to no social events)” and to decide “whether or not I’m tired of virtual happy hours.” The absurdity of such disparate circumstances was not lost on him. “Oh by the way,” he sardonically remarked, “I also started day trading.”

One evening student candidly admitted that, even while she was taking an ethics class, her day job had her busy sharpening the axe for layoffs. “Before the current pandemic, I hate to admit that some of these choices and analyses were far easier for me to do,” she said. “It was for the good of the company and it was good for me professionally. Now as I look around and see friends and family personally affected by other companies deciding to furlough employees, I feel personally conflicted about the work I am doing. Did it take personal appeals to make me feel differently?”

That it did for her, and for many other students, is not an indictment of their professional experience or the scope of their education so much as an acknowledgment of their blind spots. George Orwell writes of these in The Road to Wigan Pier, his coruscating account of the lives of coal miners in 1930s Britain. Allowing that most Englishmen are fine with miners enduring hellish hardships deep beneath the earth to keep their own accommodations toasty, Orwell observes, “most of the time, of course, we should prefer to forget that they were doing it.” He continues: “It is so with all types of manual work; it keeps us alive, and we are oblivious of its existence. More than anyone else, perhaps, the miner can stand as the type of the manual worker, not only because his work is so exaggeratedly awful, but also because it is so vitally necessary and yet so remote from our experience, so invisible, as it were, that we are capable of forgetting it as we forget the blood in our veins.”

This kind of forgetfulness, so blessed to the blessed, such a curse to the afflicted, is one casualty of the current pandemic. So is its implication for the comforting fictions we tell ourselves about the munificence of free markets. This is true, at least, for many of my students, and not simply those who seem on the cusp of declaring themselves outright socialists.

For instance, toward the end of my class, one student who appeared far more sympathetic than most of his peers to the aspirational elements of capitalism noted an uncomfortable irony. In good times, the benefits of the system start at the top and trickle down, but in bad, the pain bubbles up from the bottom. “This is how a capitalist system functions,” he explained. “The capital holders get the most benefit of a prosperous time. And in times of difficulty, they’re the last ones to really feel the extreme pain.”

Another student chimed in. “Growing up you learn that, like, you know, the Bill Gateses, the Bezoses, the Elon Musks—they’re gonna be the people who make life better. And they will, but they’re not gonna protect you.” It was something of a gray epiphany. The student admired such men, yet he seemed to perceive that their self-interested pursuits were fundamentally indifferent to his welfare. “The innovators, the creators are the people that we should look to for answers and, you know, for the most part, for innovation—but for protection and safety, maybe not.”

I pressed him on what this revelation meant for him. On my screen, a grin appeared: “I found the flaw in my ideology.”

This was the same admission Alan Greenspan made at the height of the 2008 financial crisis in an episode we discussed at the outset of the course. For the former Fed chair, the “flaw” in his thinking was his absolute fidelity to the belief that free markets police themselves efficiently. For my students, the flaw they wrestled with was not technical in nature but something closer to a moral failing. Yes, capitalism will do a lot of great things, but especially if you are poor and vulnerable, protecting you is not one of them.

These Booth students, to my knowledge, were neither poor nor especially vulnerable. But for many of them, the business of business was no longer what it had seemed just a few months earlier. COVID-19 has made brutally unavoidable the moral and practical limits of the blinkered pursuit of self-interest—a lesson, I suspect, that will remain with them long after the pandemic has lifted. How exactly they apply it to their own lives is another uncertainty, one whose resolut ion will shape the system we spent the quarter scrutinizing and lay the groundwork for the next chapter in the ethics of business.

John Paul Rollert, AM’09, PhD’17, is an adjunct assistant professor of behavioral science at the University of Chicago Booth School of Business.