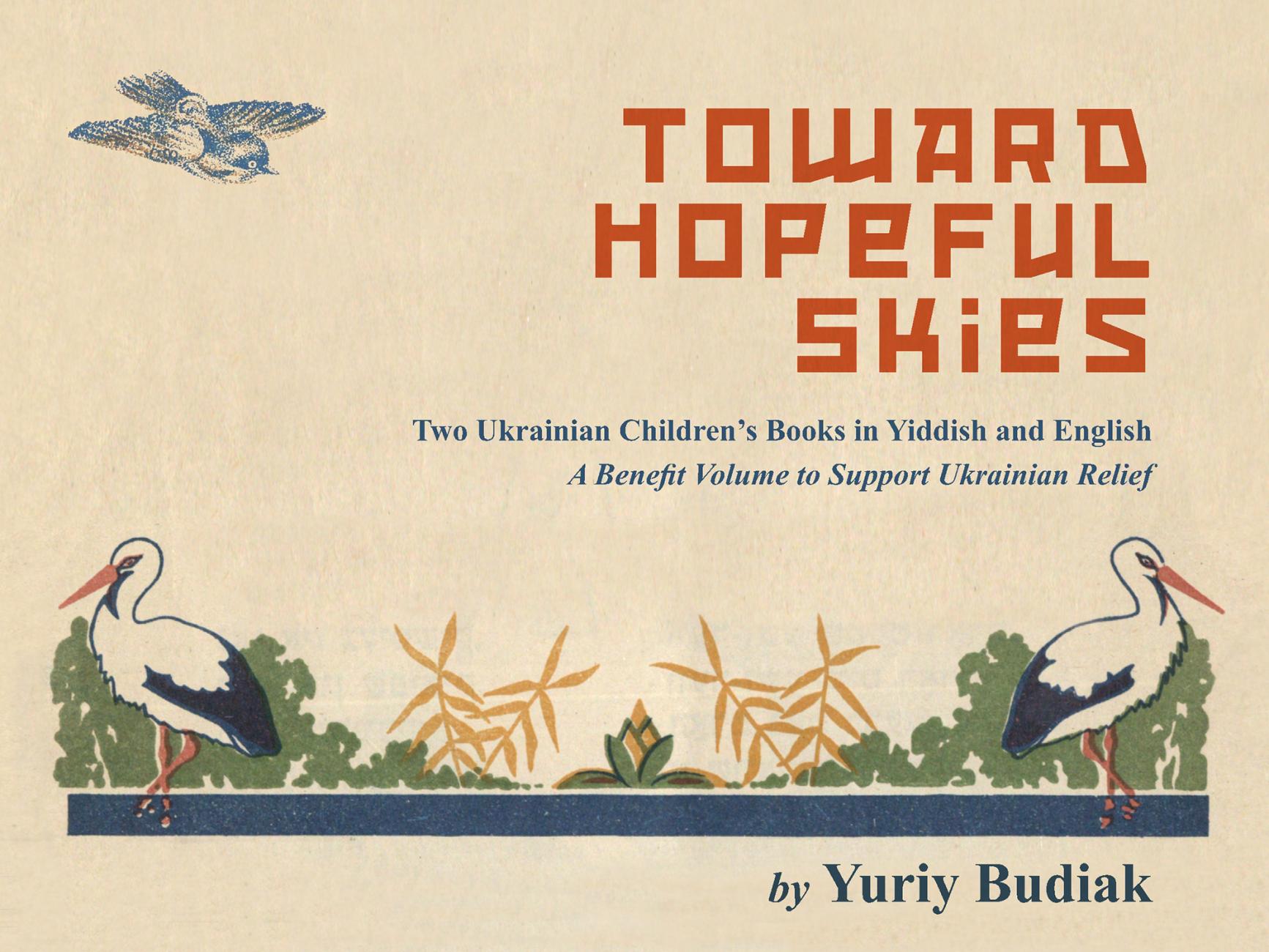 That tweet led to a collaborative translation project. Toward Hopeful Skies (Naydus Press, 2022) collects two picture books by the same author: the cuckoo story and one about a crane, Bushl der Vanderer. The trilingual translation—English, Yiddish, and Ukrainian—is a fundraiser for HIAS, a refugee resettlement agency.

Why did you choose to share Di Kukavke Tshvitsheravke with your class?

I had put together a list of items from Special Collections that represented different facets of modern Jewish culture. I thought a children’s book would be interesting. The book was originally published in Ukrainian in the 1920s and translated into Yiddish soon afterward.

It’s in Soviet orthography, so the spelling is a little different from Yiddish publications from New York. I find the images very whimsical. They’re bright and colorful.

Ukrainian Jewish history is a pretty gruesome thing in this period, just after the Russian Civil War, when there was mass murder of Jewish communities. So thinking about that context and then seeing these very happy images … Children’s culture is hopeful in a way that other kinds of literary production are not.

How did the early Soviet Union view minority languages? Were they encouraged or suppressed?

Early on in the Soviet Union, multilingual, multinational materials that supported Soviet culture were encouraged. That changes later on, when Yiddish is no longer supported by the state. But in this early period, there’s a real flowering of Yiddish literature and other minority national cultures.

The Yiddish picture book rhymes, and your English translation also rhymes. How do you accomplish that as a translator? Did you do a literal translation first?

I don’t like to do what some people call a literal translation first. I don’t think that helps very much for what I’m trying to do, which is to re-create the mood of the poem. It matters more to have the lightheartedness and singsong-iness, rather than the meaning of each individual word.

As I translated, I would give myself, in parentheses, some different words that would make sense. Then I would get to the next line and think what constellation of words could make sense there. I worked slowly.

In one place, you have a sight rhyme: “bother” and “mother.” To me, that imperfect rhyme makes the couplet even more powerful.

A literal translation of that verse would be something like

Oy, cuckoo, oy, cuckoo,
you mischievous/wanton/shameless/naughty “tshvitsheravke”
(a neologism that means something like, “silly little girl-thing that twitters”)
all you do is sing and pester/get on people’s nerves
you’ve sworn off your children

My finished translation was

Cuckoo, cuckoo, dearest cuckoo!
Such a naughty bird are you!
All you do is chirp and bother,
You don’t care to be a mother.

I had to change children to mother to get a rhyme, which is really different. Rather than just leaving her children behind, the bird is leaving behind a whole identity. “You don’t care to be a mother” feels very weighty in our post-Dobbs moment.

Don’t all parents secretly wish to dump the kids in someone else’s nest sometimes?

I have two kids, and I was mothering during the pandemic, teaching from home with the kids at home. There’s something sympathetic about a mom that wants some freedom.

Read about the genesis of this translation project in “A Little Bird Told Me.”