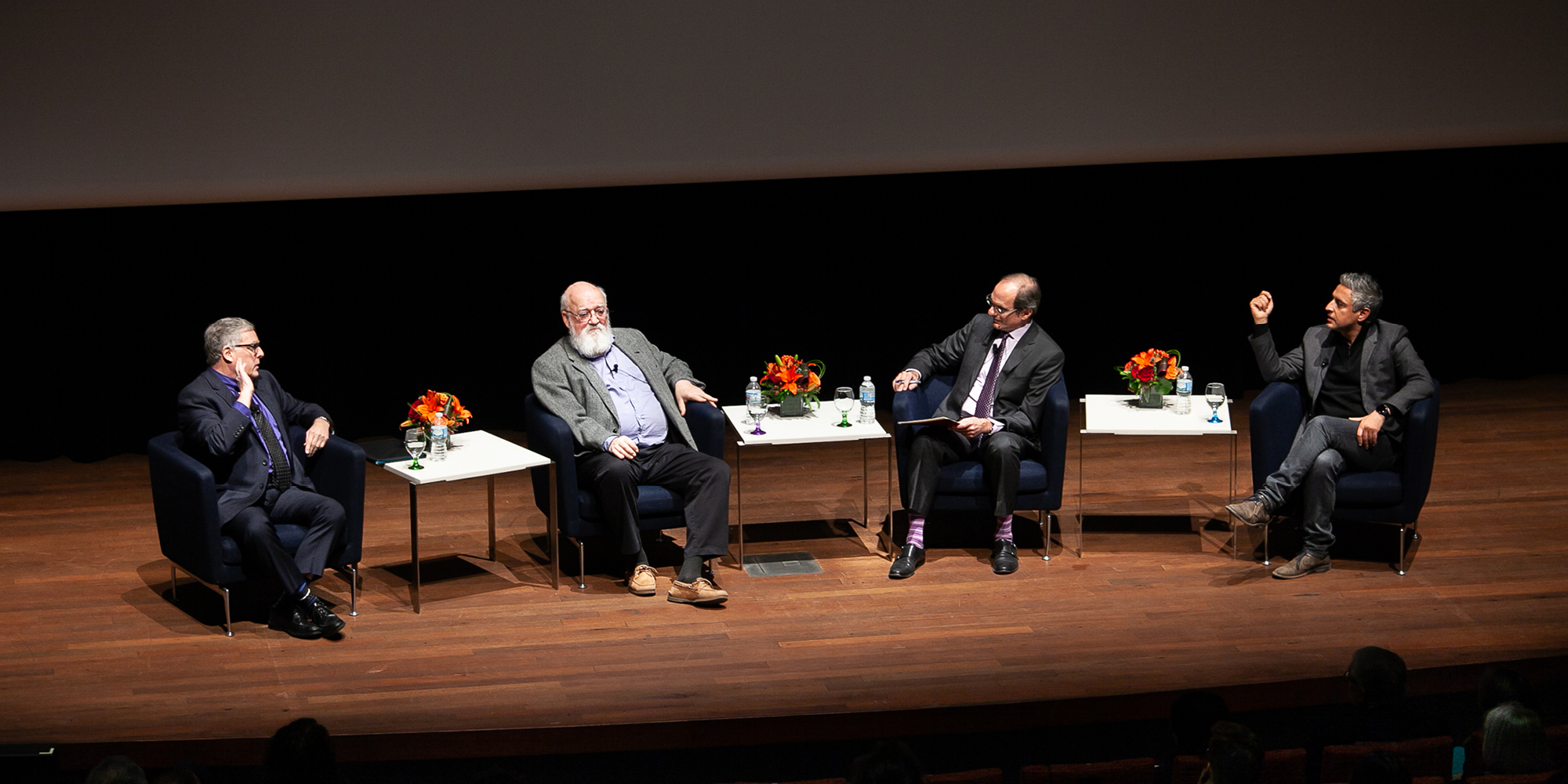 An atheist and two believers debate the future of religion

By
Author
Lucas McGranahan
|
The University of Chicago Magazine
—
Spring/19

The philosophical canon is well stocked with arguments for the existence of God. An active force was necessary to set the cosmos in motion (the cosmological argument). Nature is too well engineered not to be the result of intelligence (the argument from design). And the one that tries to win it all on a semantic technicality: God, defined as the greatest of all beings, must necessarily exist, since not existing would be, well, not great (the ontological argument).

These shopworn arguments—and their standard rebuttals—were nowhere to be found at a panel discussion on religion held at the Reva and David Logan Center for the Arts in February. Instead, the speakers focused on something more tangible: the function, meaning, and future of faith. What is religion to us?

Organized by the Stevanovich Institute on the Formation of Knowledge, the panel was composed of best-selling author and religious scholar Reza Aslan, atheist philosopher Daniel C. Dennett, and theologian William Schweiker, the Edward L. Ryerson Distinguished Service Professor of Theological Ethics and an ordained Methodist minister. In terms of sympathy or antipathy for religion, it was two against one: Aslan and Schweiker are believers; Dennett’s preferred analogy for religion is a virus.

“Now, every human group that’s ever been studied had something like a religion. What do you think religion is for?” Dennett asked rhetorically, about a half hour into the event. “Every human group that’s ever been studied has the common cold. What is it for?” Did religion take hold because of its value for humans, or did it merely go viral, making us sick in the head?

This sort of talk can raise the collective blood pressure in a room, calling to mind the classic advice about which topics shouldn’t be discussed at the dinner table. But a degree of tension is natural when people’s deepest-held beliefs are debated in the open. It’s a sign that an important issue is being touched upon instead of politely held at bay.

The formidable task of facilitation was handled by interim Divinity School dean David Nirenberg, who demonstrated a keen sense of the value of comic relief. After Dennett proposed a thought experiment—imagine we could each achieve immortality by backing up our brains every Friday—Nirenberg had a quibble: “Friday is out of the question—it’s Shabbat.”

But Dennett had a serious point: we seem to be missing something important when we engage in the religious—or techno-utopian—search for the infinite. Schweiker shared the concern, calling this the “root question” of the evening: “Do we value finitude, or have traditional religions and some scientific discourse really diminished the worth of finite existence in the hope of some eternality?” Isn’t the limited nature of existence what makes life—each day, each moment—matter?

By the discussion’s end, there had been perhaps more agreement than one might have expected. All panelists took the position that private religious beliefs should be given no special weight in public discourse. “If your faith has certain precepts that you think are deeply important morally, your obligation is not to play the faith card but to explain [them] in terms that everybody else can understand,” Dennett said in an impassioned moment. “And the fact that it’s written in your holy scripture doesn’t count for anything at all.” Aslan and Schweiker quickly agreed.

All panelists were also happy to view religion as a part of history and culture, subject to the folly and myopia of any human endeavor. Indeed, the core of Schweiker’s philosophy, as he laid it out in response to an audience question, is that human thinking is “mediated through cultural and linguistic forms that develop through time. Our knowledge is always, therefore, deeply historical, deeply fallible, and deeply humane.”

None of the panelists seemed concerned that a neurological perspective might challenge human freedom. Are we the true authors of our actions? What if our “choices” are just the result of the ironclad laws of physics and chemistry operating within our brains? Dennett has worked to resolve this issue in print, taking a middle-road philosophical position called compatibilism. Aslan sounded more cavalier: “Actions and thoughts are directly caused by neural activity—and so what?”

During the question period, ecology and evolution professor emeritus Jerry Coyne remarked on the high level of agreement among the speakers—enabled by their avoidance of specific doctrinal issues—calling the event a “secular love fest.” Coyne, an atheist activist, asked the two believers on stage, “Do you even care whether God exists or whether there’s an immortal soul?”

“Of course I care,” Aslan said. “But I also recognize that both of those statements are utterly, ridiculously unprovable.” Schweiker responded that faith, to him, is primarily a practical matter. “It may entail speculative and metaphysical beliefs, but I think most folks are religious because they’re concerned with how to orient their lives in certain ways.”

As for the future of religion, Dennett took heart in opinion polls showing that religious affiliation is on the decline. But the others denied that such polls spell the demise of spirituality, broadly speaking. (And some polls, Aslan pointed out, suggest that religious affiliation is rising in non-Western countries.) For Aslan, religion—or the primeval “religious impulse”—is universal. He also emphasized religion’s role in forming people’s identities, which can be a deeper and more important function than merely telling people what to believe. “We’ve been talking about the death of God for a very, very long time,” Aslan said, “and all you have to do is look around the world to know that God is still very much alive. For better or worse.”