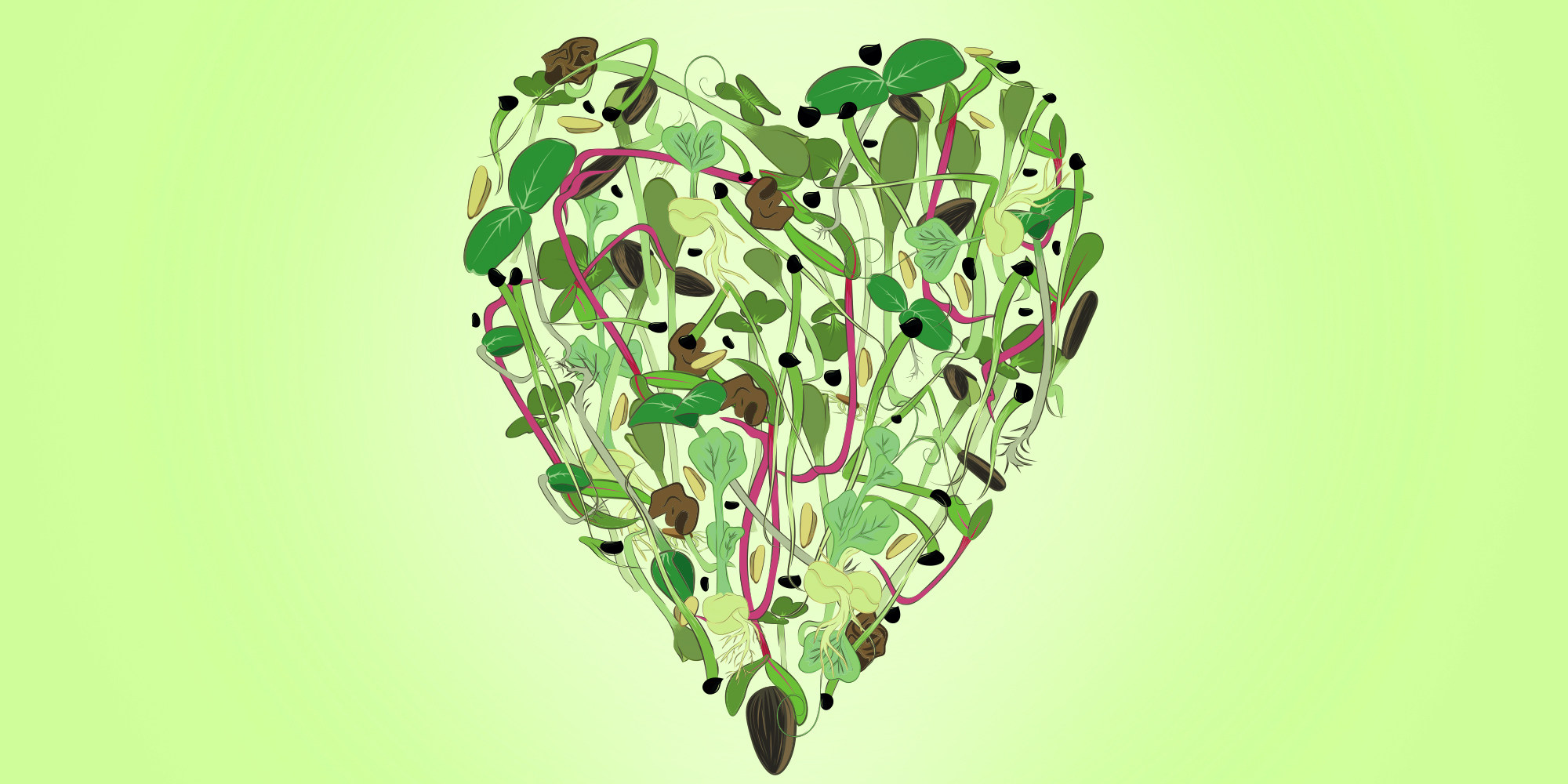 The president of the American College of Cardiology advocates a plant-based diet as part of shifting heart disease treatment from “event” to “prevent” focused.

Last year, for example, a large trial linked sugar consumption to cardiovascular mortality. “My tea was an excuse to have sugar,” Williams says, but he eliminated it immediately, gladly accepting more bitterness in exchange for peace of mind. It doesn’t taste as good, but “on a comfort level, I very much more enjoy it.” Green tea improves memory, he notes, and now he sips it without the risk associated with increasing his blood sugar.

Williams also goes easy on ketchup that contains high fructose corn syrup, which he once enjoyed as a source of prostate-protecting lycopene. “I’ll use a dollop of ketchup here and there,” he says, “but not much.”

Those are minor modifications compared to the shift Williams made more than a decade ago after a blood test revealed a high level of LDL, the so-called bad cholesterol. Not long before that, he had seen dramatic improvement in a patient with cardiovascular disease who had adopted a plant-based diet. Impressed, and a little surprised, by the progress the woman made—she also adhered to an exercise and meditation regimen—he decided to try the diet for himself.

Williams, a professor and clinician at Rush University Medical Center in Chicago, had no trace of heart disease, just the one risk factor. He already avoided fried foods and favored skinless chicken over red meat. Many people in his position would have perceived little room to improve how they ate, or wouldn’t have felt the motivation to try.

Outlier that he is, when he received the news of his cholesterol level, Williams gave up eating all animal products “that day.” In less than two months, his bad cholesterol level plummeted from a risky 170 to 90, comfortably within the range considered optimal.

Since then Williams has eaten no animal products—no meat, no fish, no eggs, no dairy. Unlike those who find enjoyment or comfort even in foods they know are unhealthy, Williams takes solace in the belief that, with each bite, he’s doing no harm. “I don’t mind dying,” he says, “I just don’t want it to be my fault.”

When advising patients on diet, Williams does not expect them to share his mind-set. He’s sensitive to the truth embedded in the exaggeration that some people would rather die than give up foods they love. Instead of hectoring, he probes for a particular hook that could alter risky behavior.

Maybe it’s the promise of fewer pills to manage high blood pressure or diabetes. Maybe it’s a reduced risk of cancer. “We really can move the needle by just finding out where they are along that risk-averse versus enjoyment spectrum,” he says. “I think that’s one of the most important things we are lacking. Not every prescription or every diet is going to work for every person.”

Genetics also contributes to the effect of dietary changes on risk factors such as cholesterol level. Nevertheless, Williams remains a vocal advocate of plant-based eating to prevent and even reverse cardiovascular disease.

His diet is often called vegan, although he avoids the term because of its moral implications. For many, the choice is an ethical issue. Williams’s motivation is purely medical.

But that does not make his position uncontroversial.

Few physicians go as far as Williams does in promoting a diet free of animal products, but he’s no fringe figure. In 2015 he’s serving as president of the American College of Cardiology.

From that perch, he thinks big and his voice carries. Williams acknowledges that in his single year as president he will not be able to lead the organization to a milestone he covets: dislodging heart disease from its perch as the No. 1 killer of Americans.

Demoting heart disease from the position it has held since the 1918 flu pandemic is within reach, he insists, perhaps within three years. “It’s going to happen.”

Medicine has made dramatic inroads in reducing cardiac-related deaths. Statins have been revolutionary cholesterol-lowering drugs. Bypass surgery, balloon angioplasty, and nuclear heart scans have made life-saving progress during Williams’s career.

He jokes that nuclear scans have been especially important. “Jokes” because he’s a founding member and past president of the American Society of Nuclear Cardiology, and he leavens his professional pride with a wry awareness of his personal bias.

There’s another reason Williams avoids heaping too much praise on such medical advances. While they have all contributed to real improvement—a 50 percent decline in cardiovascular mortality over the past three decades—the progress is partial. “We have become really good,” Williams says, “at treating complications.” That is, saving the lives of heart attack and stroke victims and identifying cardiovascular disease earlier.

Preventing the underlying problems that cause these life-threatening health crises has proven a much more stubborn challenge. Cardiovascular disease remains the preeminent health menace, maintaining its top ranking despite everything medical science has marshaled against it. Like nuclear scans. “Diagnostic testing has improved our ability to identify patients with disease and approach them earlier,” Williams says. “But in order to flunk a nuclear test you already have to have disease, though, so we’re not getting ahead of the game by doing this.”

A conference presenter once illustrated the point with a memorable slide. In a cartoon, two doctors mopped up a flooded floor around an overflowing bathtub, Williams recalls, but the water was still running. “That’s essentially what we’re doing.”

Diet and lifestyle issues, along with insufficient care in underserved communities, keep the spigot open. To turn the water off, Williams wants to shift cardiology from “event-driven” to “prevent-driven” treatment.

When it comes to how people eat, though, an ounce of prevention can feel like a heavy burden.

Williams detailed his individual improvement after adopting a plant-based diet in a guest blog post this past July for MedPage Today, a news and continuing education website for physicians and other health care workers. He described the patient’s progress that inspired his personal experiment with plant-based eating, the research that undergirds his advocacy over the past decade, and his wish for widespread improvements in diet and exercise habits to revolutionize heart health.

Reactions were extreme. “Vilification and canonization,” Williams says. Matthew Sorrentino, MD’84, a UChicago professor of medicine and a preventive cardiologist, has a more measured perspective. “The important thing is to recognize that there are multiple dietary approaches,” he says. “Kim’s been talking about a vegan or a vegetarian diet. For the right person, there’s nothing wrong with that type of diet.”

The American Heart Association’s recommended diet, Sorrentino notes, includes high levels of fruits and vegetables, and whole foods over processed. But it does not eliminate animal protein and suggests that fat make up 25 to 35 percent of nutrients. “It’s not a low-fat diet,” he says, “but it’s a low saturated-fat diet.” And the Mediterranean diet has also been shown to be effective in reducing heart disease. Most doctors, including Williams, call for more research to establish the benefits of plant-based eating.

In response to the tide of comments on Williams’s blog, MedPage Today sought the perspective of Dean Ornish, clinical professor of medicine at the University of California, San Francisco, and founder of the Preventive Medicine Research Institute. Ornish is perhaps the best-known doctor touting the preventive and healing power of a plant-based diet.

Praising Williams’s “courage and leadership” in raising the issue, Ornish emphasized the impact of what he calls lifestyle medicine. “We tend to think of advances in medicine as a new drug, laser, or surgical device, something high-tech and expensive,” Ornish wrote. “Yet, the simple choices we make in what we eat and how we live have a powerful influence on our health and well-being.”

Ornish’s program fuses exercise, stress management, and social support with a plant-based diet. Sorrentino also notes that diet, although essential to heart health, is just one facet of disease prevention. A person’s weight, smoking or drinking habits, and exercise levels also play an important role. “As a matter of fact,” Sorrentino says, “most studies will suggest that a cardiovascular exercise program will give you greater risk reduction than any change in diet.”

The dietary changes Williams advocates can be daunting and confusing for patients. He mentions no brand names in public, but “in the privacy of the clinic room, I’ll show them the things that I’m buying and where they can get it,” Williams says. “If you tell people to change their diet and they don’t know how, it’s not going to help very much.”

In underserved communities, in particular, many people don’t know how to help themselves. They lack access to preventive care—and the counsel that comes with it—and affordable, healthy foods. For Williams, who grew up in such a community on Chicago’s South Side, rectifying those circumstances would be another crucial nudge toward making cardiovascular disease No. 2.

To do that, though, requires bringing medical care directly to the people who need it most. “For example, going into churches and instituting heart programs,” Williams says, “where we measure lipids, blood pressure, and hemoglobin A1C to check for diabetes. We need to be able to do more of that and find people early.”

Too many first encounters with patients are in the clinic after untreated—often even undiagnosed—diabetes or high blood pressure leads to a cardiac event. “If the first manifestation of high blood pressure is presenting with a stroke,” he says, “then we’ve failed.”

Even with access to medical care and healthy food, Williams finds that, for many people, dietary choices are deeply rooted, almost religious. Others feel, like he did before his cholesterol wake-up call, that they make reasonably healthy choices and have little incentive to change. Some shrug and say they eat like their parents did, Williams says, “without connecting the dots that their parents actually died of heart disease more than 50 percent of the time.”

He sees increased awareness that a typical American diet can lead to a surgical suite and an intensifying interest in avoiding that fate. But few people have his aversion to food-borne health risks or commitment to immediate diet modification. Tradition and temptation remain huge obstacles.

“Our culture defines good food or healthy food in a certain way that has led very much to the epidemic of heart disease. We have to redefine marketing in a more healthy way,” Williams says. “We have to find other mechanisms in life to provide comfort rather than calories. Until we make those changes, we’re going to have one epidemic after another—obesity, diabetes, …”

Instead of feverishly mopping up the overflow, though, Williams approaches his American College of Cardiology presidency and his interactions with patients as opportunities to tap into people’s latent interest in prevention before it’s too late.

“Our job is to try and capture more of the population,” he says, “so that it makes it easier to get people to take care of themselves.”