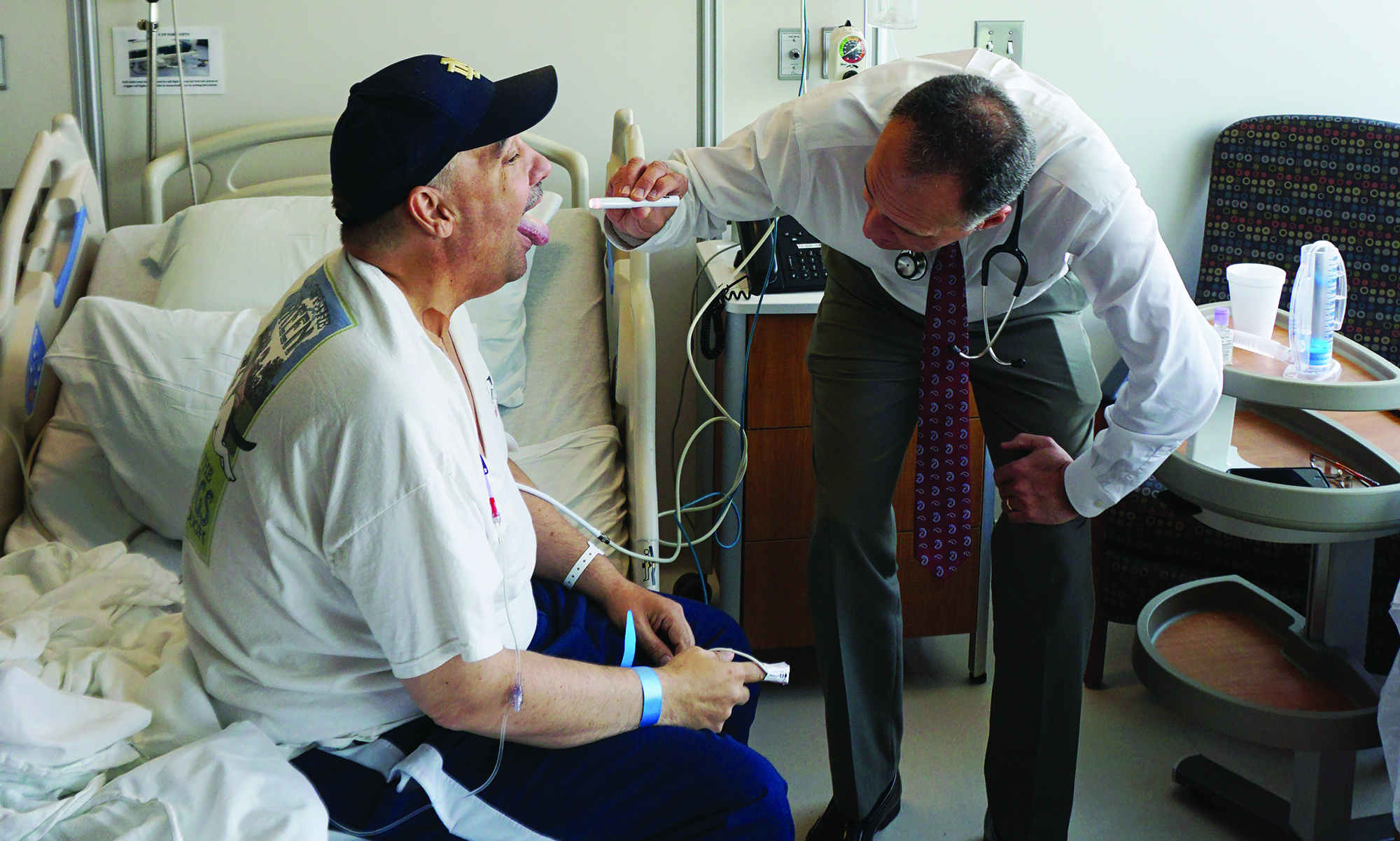 Four years after receiving his cancer diagnosis, and more than a year after receiving CAR T-cell therapy, Scott McIntyre is in remission. The procedure that saved his life received FDA approval this summer. (UChicago Medicine)

A new weapon in the fight against cancer

A new type of immunotherapy is helping UChicago Medicine patients.

By
Author
John Easton, AM’77
|
The University of Chicago Magazine
—
Fall/17

“It was like seeing your first child being born,” says Michael Bishop. On May 28, 2016, Bishop and members of his team watched several million modified white blood cells surge through an IV and into the waiting arm of 53-year-old Scott McIntyre.

“To see them flow in is exciting, even amazing,” says Bishop, director of the Hematopoietic Cellular Therapy Program at the University of Chicago Medicine. “My first thought was: Is that it? That’s all it takes, that little amount of cells?”

It was the first chimeric antigen receptor T-cell (CAR T) infusion, a new form of immunotherapy, at the University of Chicago Medicine, and McIntyre was patient 1. The cells he received were his own, harvested three months earlier and modified at a lab in Switzerland to help fight his cancer.

The process began around 9:30 a.m. Just after 10, the lymphocytes arrived in a metal cooler packed with liquid nitrogen. The cell processing lab technician removed the small packet of frozen cells and gently began to thaw them. The infusion itself took just 10 minutes.

McIntyre had been waiting a long time for this. He was diagnosed with diffuse large B-cell lymphoma, stage III, in September 2013, after developing a swollen lymph node in his right groin area. Another scan a month later revealed a swollen node in his neck and another under his arm. Thomas Reid, an oncologist based in South Bend, Indiana, confirmed the lymphoma diagnosis in November 2013.

Today, almost 18 months after the CAR T infusion, McIntyre is cancer-free, and the procedure that saved him received approval from the Food and Drug Administration in August. UChicago Medicine is one of the first sites in the Midwest certified to provide CAR T-cell therapy.

The standard treatment for McIntyre’s cancer is a chemotherapy regimen including a monoclonal antibody, three chemotherapy agents, and a steroid—many drugs, with many side effects. McIntyre made it smoothly through the first few cycles. Then he developed appendicitis, delaying his fourth round. After all of that, his remission lasted just two months.

In 2014 Reid referred him to a trusted colleague, Sonali Smith, the Elwood V. Jensen Professor in Medicine and director of UChicago Medicine’s lymphoma program. (Bishop joined the team a year later. )

At that time, CAR T-cell therapy was being investigated in a few select centers. The short-term goal for McIntyre’s doctors was to control his cancer, make him as healthy as possible, and keep him alive. In February 2015, McIntyre had a stem cell transplant. He was in remission but, again, only for a few months. Two more clinical trials and some precisely targeted radiation therapy bought a little more time, but by late 2015 his lymphoma was gaining on him.

The first was watching his beloved Notre Dame football team play in the 2016 Fiesta Bowl. The Fighting Irish lost to Ohio, but at least McIntyre was at the game to see it.

A few weeks later, the McIntyres’ oldest son wed his longtime fiancée. They had postponed the wedding for years, McIntyre says, “because I kept getting so sick.” This time he managed to stay well, take classes to become an ordained minister, and officiate the wedding.

Then, in early February, McIntyre’s medical team got the go-ahead for CAR T-cell treatment and began harvesting his T cells. They took out blood, extracted the lymphocytes, and returned everything else. They put the collected cells on ice and awaited the next step: conversion at the Swiss pharmaceutical company Novartis, one of only a few labs worldwide certified to convert a patient’s T cells into chimeric antigen receptor T cells, a potent anticancer weapon. Because each batch is designed for a different patient, they must be produced one at a time. It takes about three weeks to prepare a patient’s cells.

These modified T cells search out specific cells—in this case, those that display a surface protein called CD19, found on cancerous white blood cells. When the modified T cells detect and connect with these dysfunctional cancer cells, they annihilate them.

The process has proved remarkably effective. In 80 to 90 percent of cases, patients with acute lymphoblastic leukemia get a complete remission. About 40 to 50 percent of patients with McIntyre’s disease, diffuse large B-cell lymphoma, have complete lasting remissions. CAR T-cell therapy has also been successful in treating pediatric acute lymphoblastic leukemia, a cancer affecting blood and bone marrow.

On April 12, 2016, Novartis at last asked the Chicago team to send them his cells. A few weeks later the modified cells came back and the date for the infusion was set.

“This is scary,” McIntyre said, days before his infusion, “but exciting.”

By this time he had already surprised his care team several times. When cancer comes back after a stem cell transplant, for example, life expectancy is about six months. “I beat the odds,” he says. “I made it over a year. Now we’re talking about a cure. I’ll take it.”

The new therapy is not without risks. Once the T cells enter the body, each one multiplies rapidly, producing thousands of offspring. Then they launch a vigorous assault. This rapid destruction of a large volume of cancerous cells can cause severe flu-like symptoms: fevers, swelling, low blood pressure. It sometimes causes neurologic effects such as delirium. McIntyre experienced this briefly, but a short course of steroids brought his immune system back in line.

Despite that episode, his course was “relatively uncomplicated,” Bishop says. “It fit our mantra: boring is good.”

Patients who have a complete response, meaning no evidence of disease for three months or more, are unlikely to have a recurrence. McIntyre is now well outside that window, back at work, and once again attending college football games.

“This is going to change how we treat hematologic malignancies,” Bishop says.“Right now, we use this for the sickest patients, those with refractory disease. But it could become standard therapy, with significantly improved prognosis. This is just the infancy of this approach.”

This story was originally published in the Fall/17 print edition as “Cell Power.”