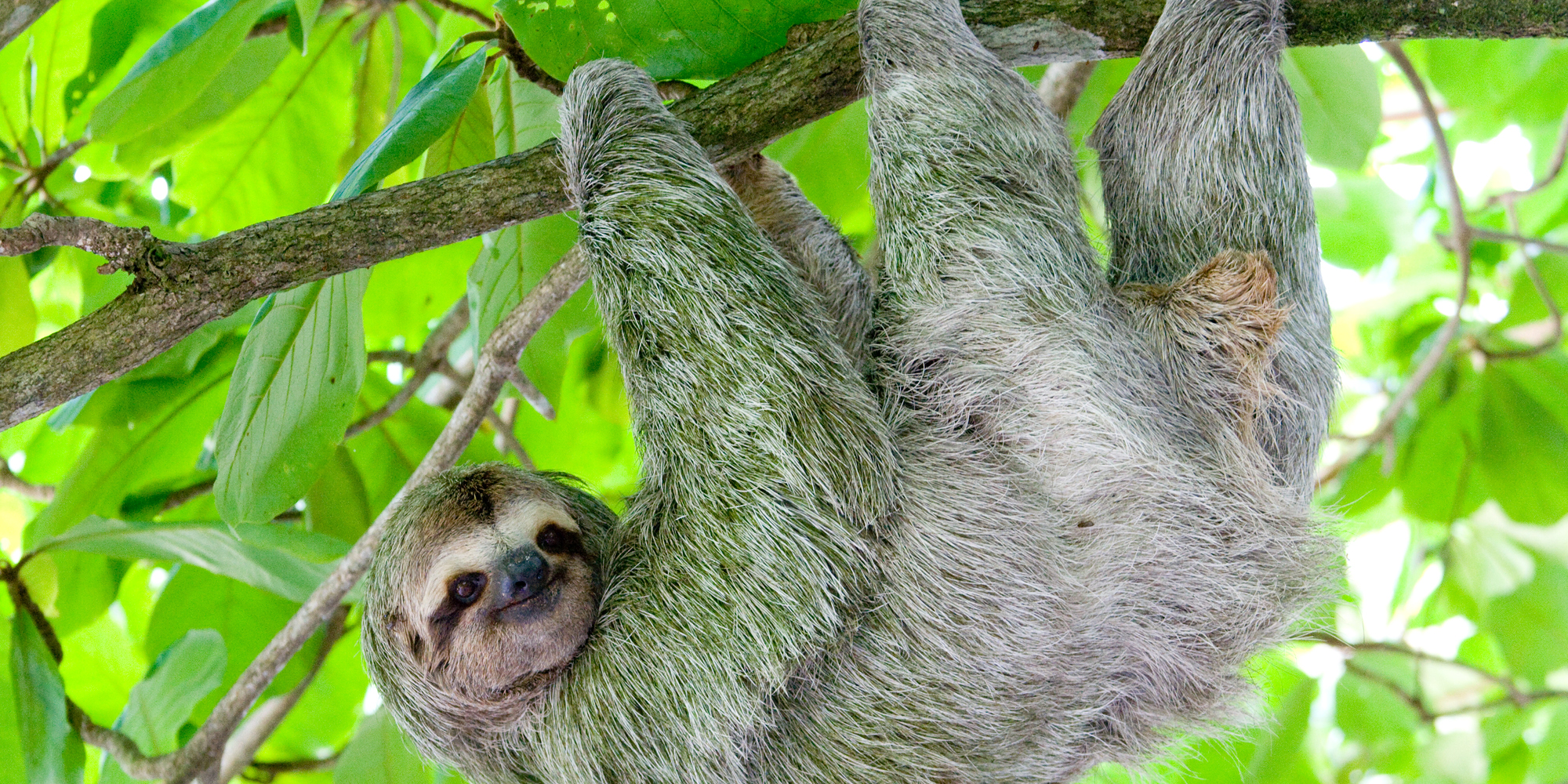 You wouldn’t guess it, but this tree dweller is related to extinct elephant-sized sloths. (Photography by henryalien (CC BY-NC 2.0))

The sloth family tree looks different than we thought

Sloths once roamed the Americas. Some were cat-sized tree dwellers, while others may have weighed up to six tons. The surviving species we know and love today are the two-toed and three-toed sloths—and paleontologists have been arguing about how to classify them, and their ancestors, for decades.

A pair of studies published June 6 in Nature Ecology & Evolution and Current Biology have shaken up the sloth family tree, overturning a long-standing consensus on how the major groups of sloths are related. Not only does the new research shed light on sloth evolution, it also provides evidence that about 30 million years ago a short-lived land bridge connected South America and what would become the West Indies—something scientists had suspected but been unable to prove with existing fossil evidence.

“The results are surprising on many levels,” says Graham Slater, an assistant professor of geophysical sciences at the University of Chicago who coauthored the Nature Ecology & Evolution paper with Ross MacPhee of the American Museum of Natural History and Samantha Presslee at the University of York. “Not only do they rewrite sloth classification, they suggest much of what we thought we knew about how sloths evolved may be wrong.”

Until now, the family tree was based on how physically similar sloth fossils looked to one another. But Slater’s study draws on a pioneering approach called paleoproteomics that uses proteins in fossils to discover evolutionary relationships—marking the first time an entire lineage has been mapped with the method.

As an alternative to DNA, which needs specific conditions to survive inside fossils (“getting ancient DNA is a bit of a lottery,” Slater says), scientists have been looking to proteins to understand species’ evolutionary trajectories. Protein molecules are sturdier and hold much of the same information as DNA.

The scientists extracted collagen samples from multiple sloth fossils, analyzed them to reconstruct the sequences of amino acids, and compared the sequences to piece together relationships between the species.

According to the results, three-toed sloths (recognizable for the cute black lines around their eyes) are not, as previously thought, outliers that diverged early in sloth evolution. Instead, they are related to gigantic elephant-sized sloths that died off about 15,000 years ago. Meanwhile, two-toed sloths are the last survivors of another branch of ground sloths previously thought to be extinct.

“What came out was just remarkable. It blew our minds—it’s so different from anything that’s ever been suggested,” Slater said.

The protein analysis also revealed that the multiple extinct sloth species living in the Caribbean were all descendants of a common ancestor that split from other sloths about 30 million years ago—a discovery that provides support for the South American–West Indies land bridge theory. It seems possible that wanderlust brought a group of sloths across the bridge, and they became geographically isolated after it disappeared.

Though revolutionary, the results square with a DNA analysis published the same day by a group from the French National Centre for Scientific Research and other institutions. That team was able to pull mitochondrial DNA from several critical fossils, and the two independent analyses align very closely. “Exceptional results demand exceptional verification,” explains MacPhee, so the two groups agreed to publish simultaneously.

Slater and his colleagues are excited about pushing the boundaries of the field of paleoproteomics. Evolutionary paleobiology is hungry for more and older data, and proteins could provide it.

“The very oldest DNA you can get is 800,000 years old, but in theory we should be able to get protein data from specimens that are millions of years old,” Slater said. “A whole bunch of questions suddenly come into reach. It opens doors that we were only dreaming of.”