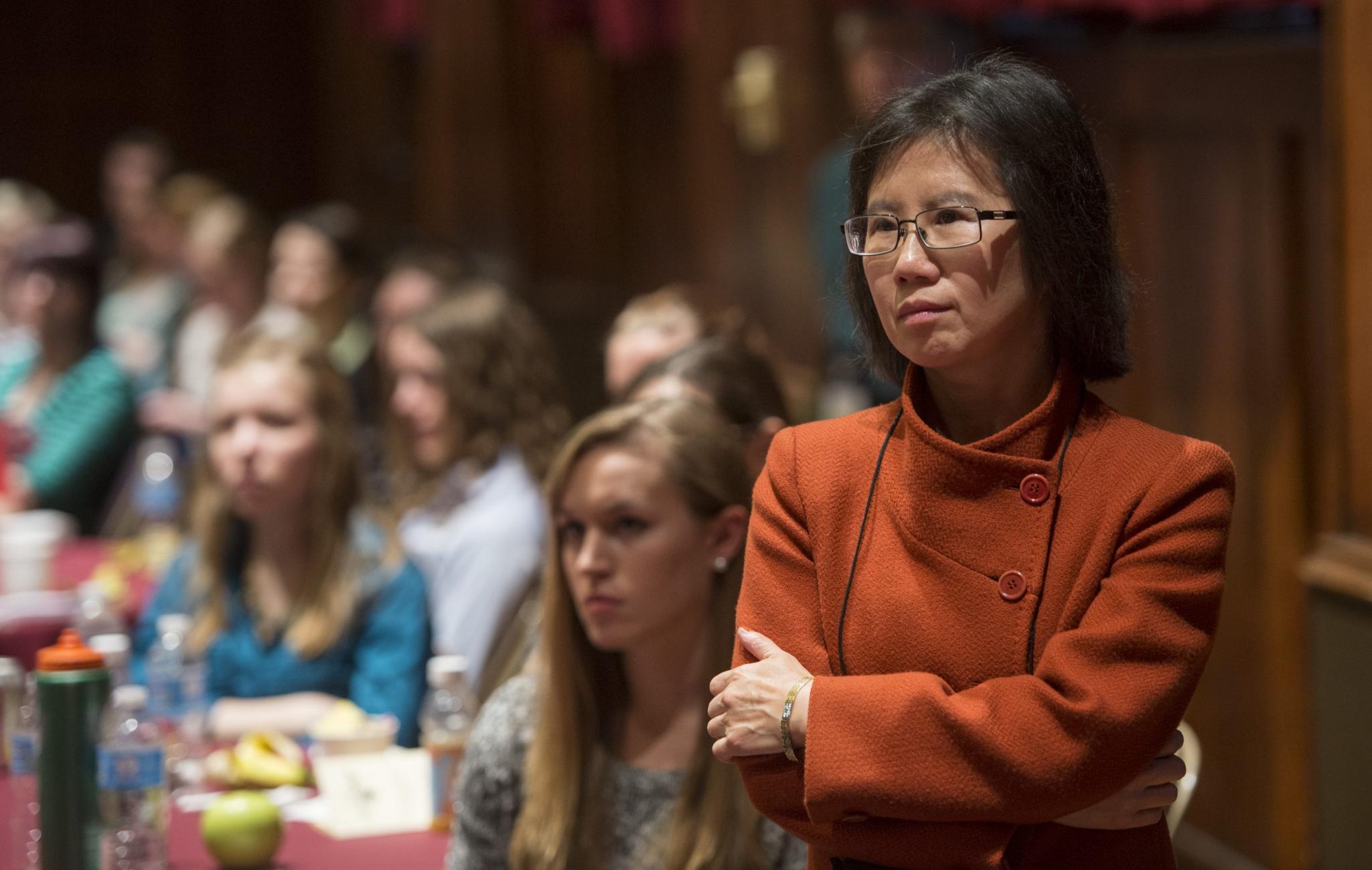 Young-Kee Kim, the Louis Block Professor in the Department of Physics, chaired the organizing committee of the Midwest Conference for Undergraduate Women in Physics held in January 2014. (Photography by Robert Kozloff)

Physics offers an example of how the division can support women in science.

The challenges women scientists faced in Nancy Grace Roman’s (PhD’49) time arose in part from being the first or only woman in their sphere. Today low representation is still an obstacle for women scientists, particularly in the physical sciences, mathematics, and engineering.

Several studies suggest “there’s a tipping point where women feel their voices are heard,” says Physical Sciences Division dean Edward “Rocky” Kolb. When a board or faculty or classroom reaches between 20 to 30 percent female, women cease being tokens and become community members. The division is “not there yet,” he says, but “we need to get there as soon as possible, and that happens by hiring tenure-track women, which in turn attracts female students.”

To increase gender parity, the PSD develops and implements strategies to increase representation and advancement of women at all levels across the division. This effort includes strengthening a culture that honors diversity, developing targeted mentoring, and expanding opportunities for women to participate in division governance.

Many professors, both men and women, work to incorporate these ideals into their own departments and research groups. Young-Kee Kim, the Louis Block Distinguished Service Professor and physics department chair, is particularly active in this pursuit.

Kim has experienced microaggressions herself as a woman physicist, she says. And although sexism is less rampant than before, she has made it her mission to combat it at both the micro and institutional levels.

One way is by tackling unconscious bias. In May 2017 Kim organized the dedication of a lecture room in the Kersten Physics Teaching Center and an accompanying exhibit for Nobelist Maria Goeppert-Mayer, who conducted her research as a volunteer professor at UChicago from 1946 to 1959 because antinepotism rules forbade her from holding a paid position where her husband was employed. (Many universities started phasing out antinepotism rules in the 1960s, when the American Association of University Women began protesting their unfairness.)

The dedication accomplishes two goals: honoring Goeppert-Mayer for her groundbreaking work in nuclear shell structure and counteracting the social conditioning to imagine all scientists as men. “Students come to physics lectures over four years,” says Kim. “They see that picture a thousand times.” Perhaps they will internalize that women have had vital roles throughout scientific history. And it’s not just women—Kim wants students to learn that science can be done by anyone, irrespective of gender, race, or ethnicity.

Kim also periodically redesigns the Kersten Physics Teaching Center “to enhance interaction, improve communal space, and create a welcoming atmosphere,” she says. Such improvements to the physical infrastructure “reflect the shift in the department’s paradigm surrounding the future of physics and how to do the best research.”

Beyond passive reprogramming, Kim works to recruit and retain women physicists. During admissions, she ensures that bias is recognized and discussed while ranking prospective students. When women and minority students receive offers, she sets up one-on-one Skype sessions with all of them. Current women grad students and faculty members play an active role during open houses.

The physics department currently has eight women faculty and 11 female graduate students who joined the program this fall, a growing community that strengthens the support structure for current and prospective female physicists, says Kim.

Fostering that community beyond UChicago, she chaired the 2014 Midwest Conference for Undergraduate Women in Physics, which united more than 200 young scientists from across the country. She has also initiated a regional conference for graduate student and postdoctoral minorities in physics, “creating not only opportunities for empowerment and network building,” she says, “but also actively changing the culture of physics today.” As Kim puts it, “It’s important to have a strong cohort.”