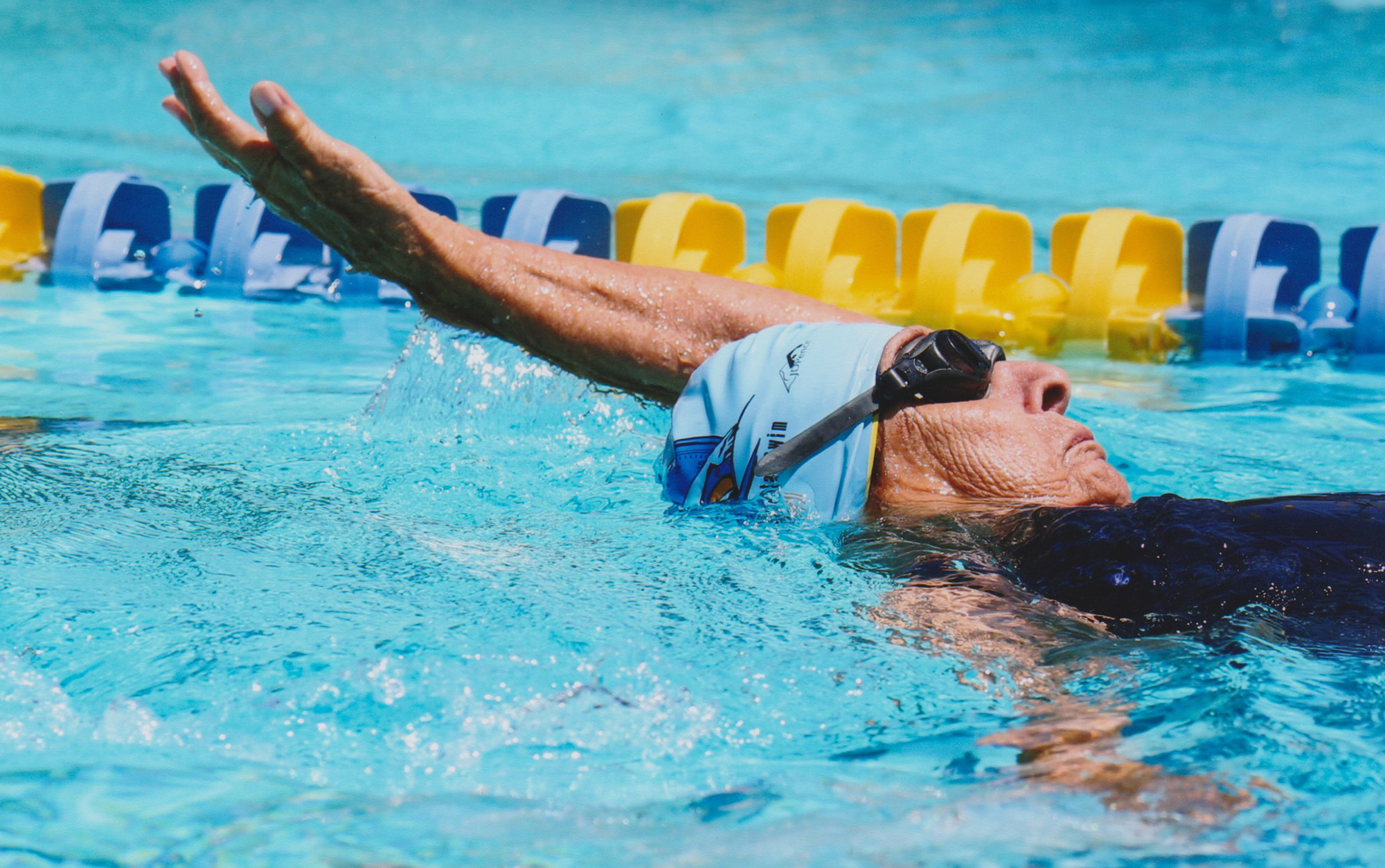 When Maurine Kornfeld, AB’42, AM’48, first started competing in 1987, backstroke was one of the two strokes she knew. Now she’s an international record holder. (Photo courtesy International Swimming Hall of Fame)

“If you can’t outswim them, outlive them”

A Hutchins-era graduate exercises her way into the record books.

Maurine Kornfeld, AB’42, AM’48, wishes she could make it back for more reunions, but they tend to conflict with her swim meets.

Kornfeld, who set her first world record at 90, was inducted into the International Masters Swimming Hall of Fame in 2018. She has set seven long-course and 20 short-course international masters records in the individual medley, freestyle, and backstroke. (A long-course, or Olympic-size pool, is 50 meters; a short-course pool is 25 yards.) At the 2017 World Masters Championships in Budapest, the then 95-year-old was the oldest woman competing in the meet, setting a world record in the 95–99 age group in the 800-meter freestyle. In four world championships, she has won 14 gold and four silver medals.

But when she started competing in 1987, she was just trying to find a time to work out. Her full-time job as a social worker left her Saturday mornings free, but when she went to the pool at the YMCA in Glendale, California, the staff told her it was closed for masters swimming practice. If she wanted to swim at that time, she’d have to join the team.

Despite having no competitive experience at all, she called the coach.

At her first practice, she had no idea what the coach meant when he told her to swim a 50. “Fortunately he pointed to the end of the pool and back,” she says—25 yards each way. “He kept shouting at me, ‘put your face down.’ I didn’t know anything about goggles. I just liked to swim.”

She stuck with it, and two months later the coach told her she’d be swimming in her first meet. As the only swimmer in the 65–69-year-old novice division, she won two blue ribbons: in the 50-yard freestyle and the 50-yard backstroke, which were the only strokes she knew.

Today she swims with the Rose Bowl Aquatics team in Pasadena, driving four times a week from her home in the Hollywood Hills. Her favorite event is the 200-meter backstroke, but a greater attraction for her is the camaraderie.

“I want to get up at five in the morning to see my swim pals,” she says. “Meeting and connecting with people who are different from oneself, who are younger, different ethnic backgrounds, all kinds of occupations—it’s both amazing and wonderful. It’s a little like being back at the University of Chicago.”

Her studies at UChicago made as big of an impression on Kornfeld as her fellow students. She remembers taking The History of Ideas with University president Robert Maynard Hutchins and Mortimer Adler: “It was a pretty heady experience.”

UChicago fostered a love of literature, evident at her Hall of Fame induction ceremony last September when she quoted Robert Browning’s poem “Rabbi Ben Ezra”: “Grow old along with me! / The best is yet to be, / The last of life, for which the first is made.” Later in the speech she mused, “I’m so glad they say it’s healthy to swim, because even if it weren’t, I’d do it.”

When she’s not swimming, Kornfeld works as a docent at the Los Angeles County Museum of Art—a role she stumbled into when she was there doing research for an art history course she was taking. She also gives tours at Los Angeles’s Union Station, the Frank Lloyd Wright–designed Hollyhock House, and the House of Blues. Her only frustration: “There are always more things to do than there’s time to do them.”