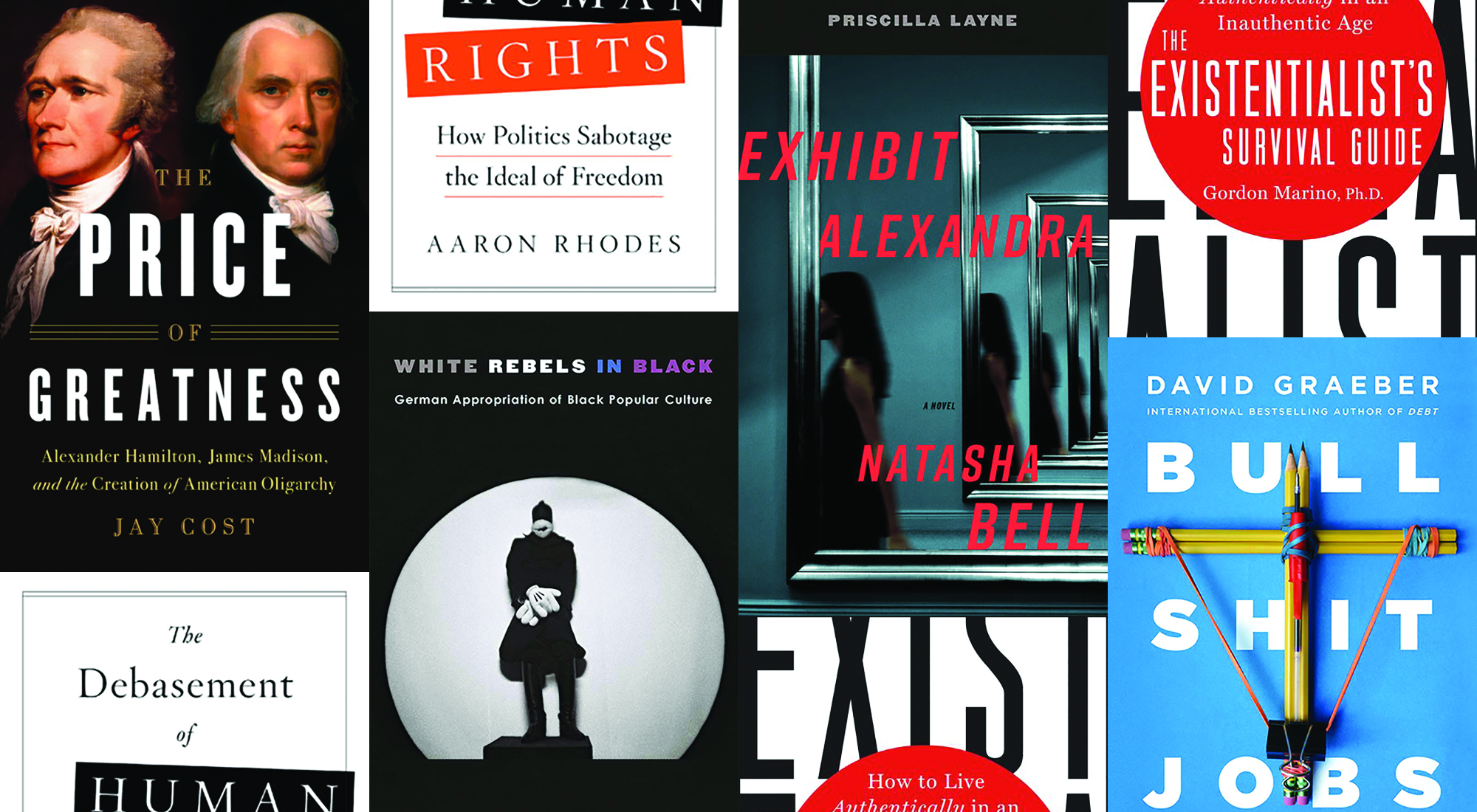 The Existentialist’s Survival Guide: How to Live Authentically in an Unauthentic Age

What would a version of Marcus Aurelius’s Meditations for the 21st century look like? Instead of a manual for living stoically, Gordon Marino, professor of philosophy at St. Olaf College, offers wisdom about living authentically drawn from a career spent studying such existentialist thinkers as Søren Kierkegaard and Friedrich Nietzsche. Existentialist thought, Marino believes, is a key to understanding anxiety, despair, and other threats to our inner well-being as pathways to becoming more fully human.

Alexandra and Marc, two university teachers in York, England, have a fairy-tale marriage and a happy family—until Alexandra goes missing. Held captive in a room by an unknown psychopath, Alexandra narrates Marc’s tortuous odyssey to find her, basing her account on reports from the police investigation fed to her by her captor, with flashbacks of the marriage and her own imagination filling in the gaps. Exhibit Alexandra, a thriller by Natasha Bell, puzzles readers with the hidden identity and motive of its villain, but the biggest mystery may be who Alexandra and Marc really are beneath the fairy tale.

If your job vanished tomorrow, would society suffer? If not, suggests David Graeber, professor of anthropology at the London School of Economics, you may be working a bullshit job. This is no personal indictment: Graeber classifies jobs as such only when workers themselves report a sense of meaninglessness. Plus, he contends, contemporary capitalism simply tends to proliferate managerial and administrative jobs that neither make, maintain, nor move things. So join the club. All of us, even traditional laborers, Graeber suggests, may be doing some amount of bullshit work, including a classic example—paperwork.

The Price of Greatness: Alexander Hamilton, James Madison, and the Creation of American Oligarchy

Alexander Hamilton, in Lin-Manuel Miranda’s Broadway musical, is adamant about not throwing away his shot.” But after reading political scientist Jay Cost’s account of Hamilton’s relationship with James Madison, you may take a different view of his vision of a country, like himself, that would be young, scrappy, and hungry. Hamilton saw an American constitutional republic that would achieve national greatness by entrusting economic power to wealthy commercial and financial interests, argues Cost, while Madison pushed for equal distribution of power among citizens. This disagreement continues in debates over the role and limits of government in US politics today.

The debut album of the Amsterdam-based quartet led by jazz pianist Harald Walkate takes its name from the Gulf of La Spezia, known as Golfo dei Poeti for its associations with Lord Byron, Mary Wollstonecraft Shelley, and Percy Shelley, who drowned in its waters in 1822. Like the album’s namesake, the nine compositions performed here by the group move between the serene and the turbulent, blending soul and Latin influences with bold jazz improvisation.

Just play Elvis Presley or the Rolling Stones, and you’ll hear how much of American and British youth culture of the post–World War II period depended on white artists borrowing from black popular music. According to Priscilla Layne, assistant professor of German and adjunct assistant professor of African and African American studies at the University of North Carolina at Chapel Hill, a similar phenomenon swept through East and West Germany after the war. In literature and film, rebellious young whites took black popular culture as their mark of defiance against mainstream norms. That trope has prompted Philipp Khabo Köpsell and other black German writers to make blackness more than a symbol.

The Debasement of Human Rights: How Politics Sabotage the Ideal of Freedom

Should the economic and social rights recognized in international law, such as the rights to social security and a sufficient standard of living, count as human rights? In this critique of the rationale behind today’s international human rights system, Aaron Rhodes, president of the Forum for Religious Freedom Europe and former executive director of the International Helsinki Foundation for Human Rights, calls for reforms that follow a classical liberal definition of human rights. Social and economic welfare are political matters for states to decide, argues Rhodes, while the legitimate concerns of human rights advocacy are more basic—protecting individual liberty and promoting civil society.