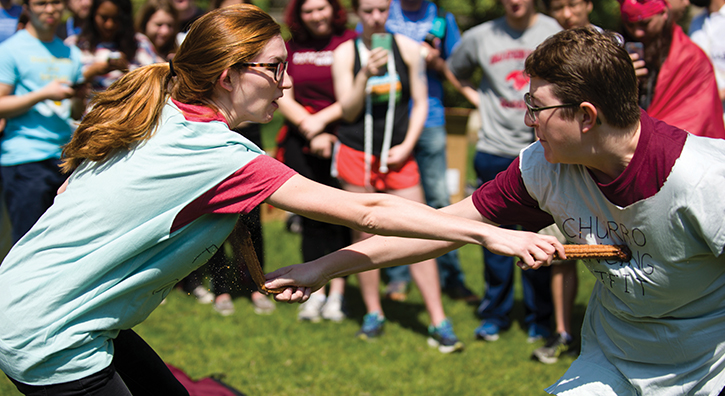 Scav Olympics 2017: Touched by a churro. (Photography by Joel Wintermantle)

Scav Hunt items worth the most points in 2017

You’ve braved the South Pole and flown to the highest heights. Now how low can you sink? Your team’s logo photographed as many meters below sea level as possible. (5 points per 100 meters, maximum of 549 points conceivably available to be awarded by the boundaries of modern science)

Rotate, turn, circle, spin, twirl, whirl, pirouette, and twist. That’s what your small carousel, capable of riding two judges and fitting within a square fathom, will do. And it will be themed on something else that rotates, turns, circles, spins, twirls, whirls, pirouettes, or twists. (200 points)

Some people like to collect souvenir snow globes from around the world, but for us, looking at a 2"–diameter sphere from the outside isn’t quite intimate enough. Construct a snow globe inside of which a judge can comfortably explore an intricate scene from any world city. We don’t care about how your snow globe looks externally, but we do expect internal enhancements such as lights, moving parts, and flurries of snow. (150 points)

The original sin of pinball was policing tilts with plumb bobs instead of just making the machine too big to move. Bring us a scaled-up pinkickball “cabinet” themed after your team’s end-times prophecy and crammed with bumpers, lights, and at least one dynamic hazard. Replace those flippers with flipper-themed shinguards though, because we’ll be playing with our feet. (125 points)