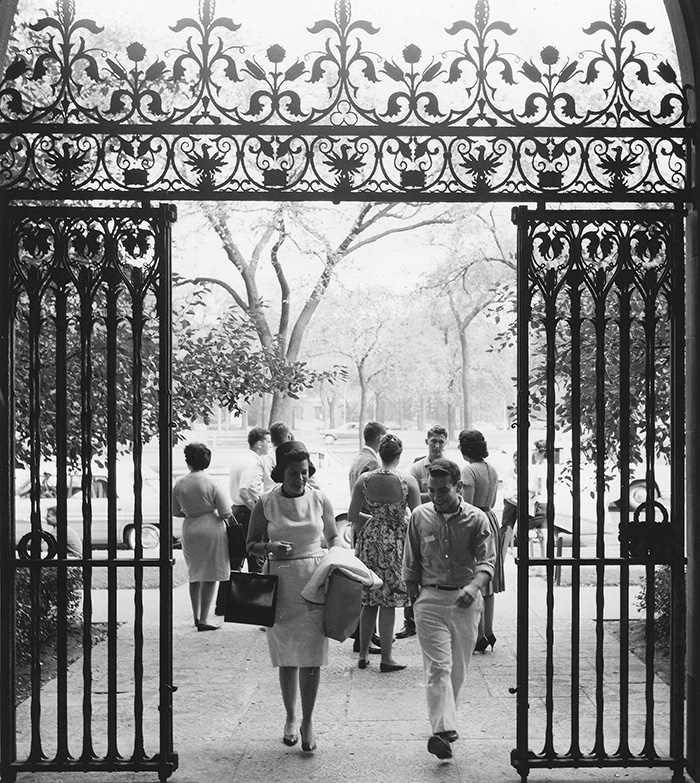 Where the life of the mind goes for company 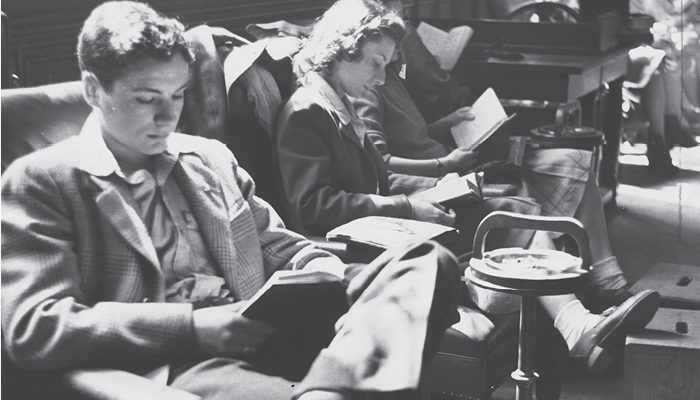 In-person activities resumed on campus this Autumn Quarter, and what haunt sees more activity than the library? The Regenstein A level it is not, but in its far nooks and corners the Harper Memorial Library, seen here in 1944, has long offered Maroons a comfortable place to low-key socialize while they study. If the memory of plush lounge chairs and inviting stacks of periodicals transports you to a Harper happy place, send us a note at uchicago-magazine@uchicago.edu. What was your favorite way to spend time at the library when you should have been studying? (UChicago Photographic Archive, apf4-01940, Hanna Holborn Gray Special Collections Research Center, University of Chicago Library)

Back by popular demand 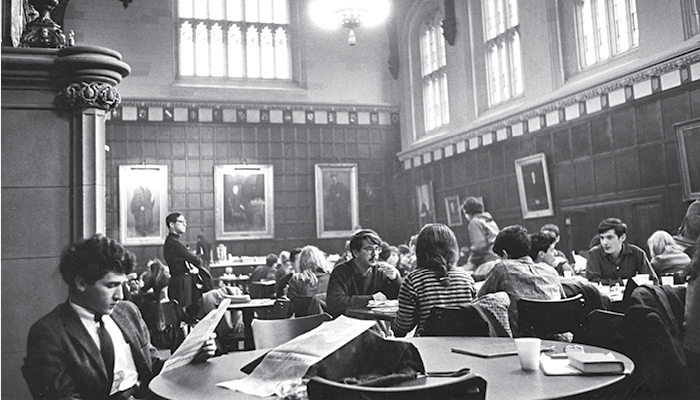 Habitués of Hutchinson Commons in November 1966 soak up the Oxford vibes in the replica of Christ Church College’s Great Hall they had recently rallied to maintain as a student gathering place. A campus planning project the previous academic year proposed converting Hutch (along with the Reynolds Club) into music department facilities. Student and faculty opposition reversed the plan and kept Hutch open for the general use of the campus community. Daily life in Hyde Park continued to ﬂow through Hutch, and with it the generations of students who have grabbed a meal, a coffee, or a look at the day’s news beneath the presidential portraits. (UChicago Photographic Archive, apf2-03906, Hanna Holborn Gray Special Collections Research Center, University of Chicago Library)

The liberal art of relaxation 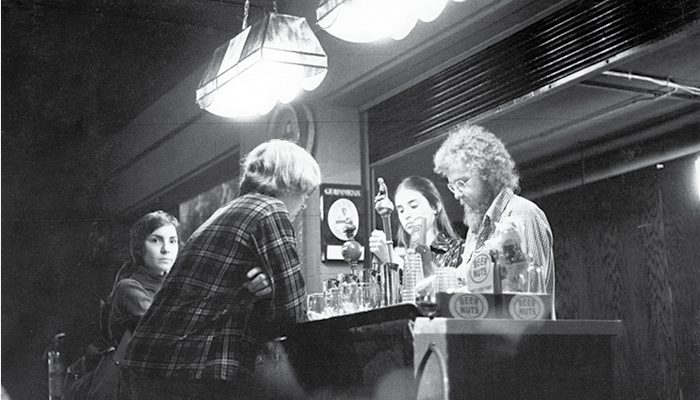 On Friday, November 8, 1974, the taps officially started ﬂowing at the Pub in the basement of Ida Noyes Hall. In this photo from the days before that official opening, charter members (UChicagoans who had prepaid their $2 annual dues) previewed the amenities at the new tavern, the ﬁrst of its kind on campus. Folk singer Melody Magnuson provided live entertainment during the midweek preview. On the Friday opening night, University marshal Robert Ashenhurst made things official by waving his baton over the bar. Beers on draft included Schlitz, Dortmunder Union, and Old Chicago Dark. Menu items included sandwiches and fried mushrooms. By the mid-1980s, the Pub boasted a big-screen television airing sports and TV shows like Hill Street Blues and Late Night with David Letterman. Temporarily closed because of the COVID-19 pandemic, the Pub reopened its doors this year on September 20 to anyone with a University ID and plans to welcome back alumni and guests as COVID restrictions ease further—so keep your ﬁngers crossed for Alumni Weekend. In the meantime, we want to know: What are your memories of spending time at the Pub? Write to us at uchicago-magazine@uchicago.edu. (Photography by Eric Buether, AB’78, JD’81; Copyright 2021, The Chicago Maroon. All rights reserved. Reprinted with permission.) 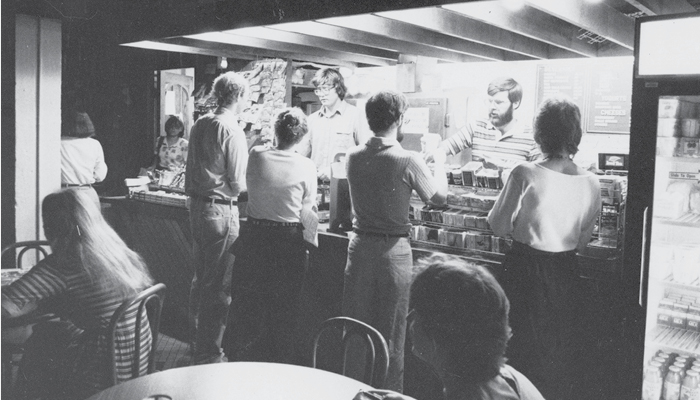 That’s how devotees of the Divinity School coffee shop refer to their sipping sanctuary in the basement of Swift Hall. Founded in 1962 and known officially as Grounds of Being since the early 2000s, the café is operated by the Divinity Students Association and helps fund scholarships, grants, events, and other student life resources. The shop has lived up to its supernal monikers: in the mid-1980s this magazine reported that the Divinity School haven was “by almost all accounts the most popular coffee house on campus,” and just last year the Maroon praised it for having “the best cup of joe available” anywhere on the quads. Closed with the onset of the COVID-19 pandemic, the shop reopened for in-person service in September. Was the Divinity School coffee shop a blessing in your life? Send us your reﬂections at uchicago-magazine@uchicago.edu. (Photography by Bill Mudge, AB’83; Copyright 2021, The Chicago Maroon. All rights reserved. Reprinted with permission.)

“In the ﬂoat of the sight of things” 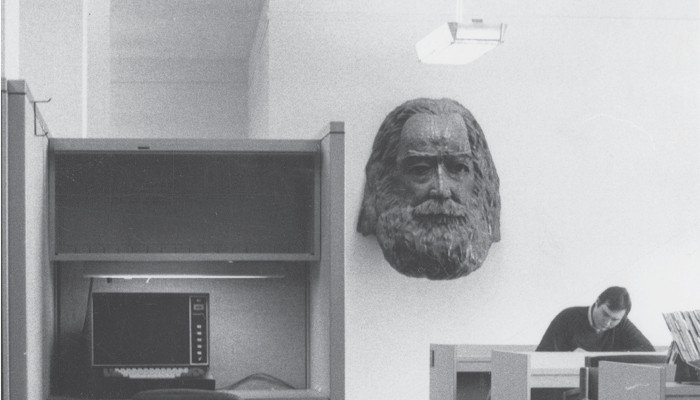 Walt Whitman holds vigil over the studious at Harper Memorial Library in 1982. Completed in 1958 and gifted to the University by the late artist’s wife in 1974, the sculpture Walt Whitman is the creation of Simon Gordon (1908–62), an artist and teacher known for his involvement in the Illinois Art Project of the Works Progress Administration. The Whitman sculpture ﬂoated over to a computer lab in Wieboldt Hall later in the 1980s before returning to Harper, where it now hangs in the building’s eastern second-ﬂoor stairway landing. Do you remember hanging out with it? Tell us about your experiences with the ﬂoating head of Whitman, and let us know where you encountered the good gray poet’s benevolent gaze, at uchicago-magazine@uchicago.edu. (Photography by Bill Mudge, AB’83; Copyright 2021, The Chicago Maroon. Reprinted with permission. All rights reserved.) 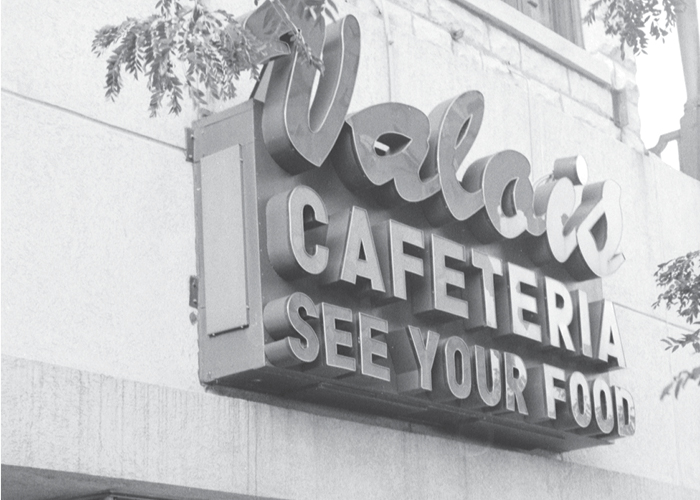 At Valois, founded a century ago this year, the slogan—nay, the promise—“see your food” is as old as the restaurant itself. Established in 1921 at 55th Street and Harper Avenue by William Valois, a French Canadian former chef at Kenwood’s Chicago Beach Hotel, the steam table diner has been at its present location on 53rd Street since 1964. Seen here not long before a 2002 expansion and remodeling absorbed the storefront next door, Valois greets its patrons much the same way today: staff instruct you to keep your tray on the counter, keep the line moving, and make your payment in cash only. (Recommended by this staff: keep room for a side of biscuits.) In honor of the restaurant’s ﬁrst 100 years, send us your Valois stories at uchicago-magazine@uchicago.edu. (Photography by Alma Limprecht, AB’98; Copyright 2021, The Chicago Maroon. All rights reserved. Reprinted with permission.) 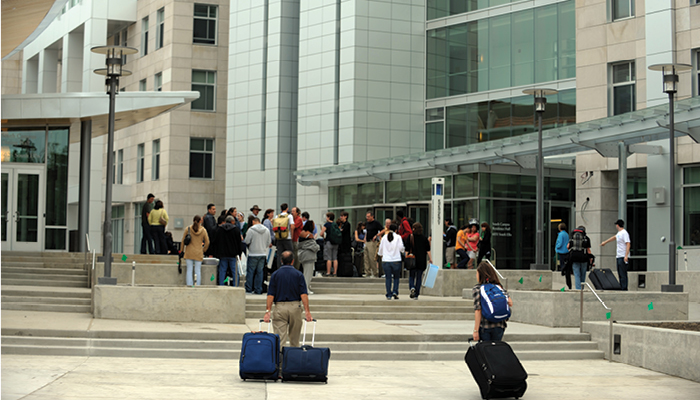 The ﬁrst move-in day at the then–newly built South Campus dormitory commences in September 2009. The largest residence hall on campus when it opened, the 811-bed dorm gave new life to a vision the University had in the 1920s of a residential college south of the Midway. With its eight College houses and adjacent dining hall, the complex expanded on neighboring Burton-Judson Courts’ partial fulﬁllment of that vision. Soon renamed in honor of philanthropist Renee Granville-Grossman, AB’63, the dorm now has counterparts both north and south of the Midway, as Campus North and Woodlawn Residential Commons help ﬂesh out a new vision of campus as a home away from home. We want to hear your campus move-in stories. What stands out in your memory about those early days when you settled into your new digs and met your dormmates? Send us a note at uchicago-magazine@uchicago.edu. (Photography by Dan Dry)

Together in cold climes and T-Hut times 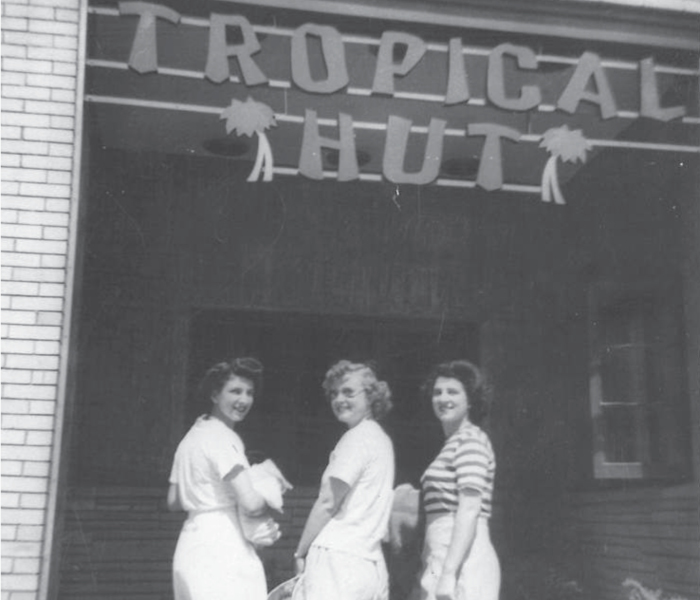 Sara Myers Turner, AM’49 (center), added to her adventures with Margaret Olson, AB’50 (left), and Catherine Rowady, EX’48 (right), with a visit to Tropical Hut on 57th Street in the summer of 1948. The three southerners—Turner hailed from Hattiesburg, MS, Olson from Tampa, FL, and Rowady from Harlan, KY— had met during Winter Quarter that year. Bonding over their similar regional backgrounds, they “became really good friends” at the University, says Turner. None of them had come to Chicago with the right kind of clothes for the winter months, she remembers, so the trio banded together for an outing to Goldblatt’s department store—“a cheap place to buy a warm coat.” T-Hut provided a summery respite. For more from Turner, see Crown Family School, page 73. And to submit your own snapshot for possible inclusion in Alumni News, write to us at uchicago-magazine@uchicago.edu. (Photo courtesy Sara Myers Turner, AM’49)

Have photos from your UChicago days? The Magazine may be able to share them in Alumni News and a future Snapshots. Send high-resolution scans and your memories of what the pictures are about to uchicago-magazine@uchicago.edu.