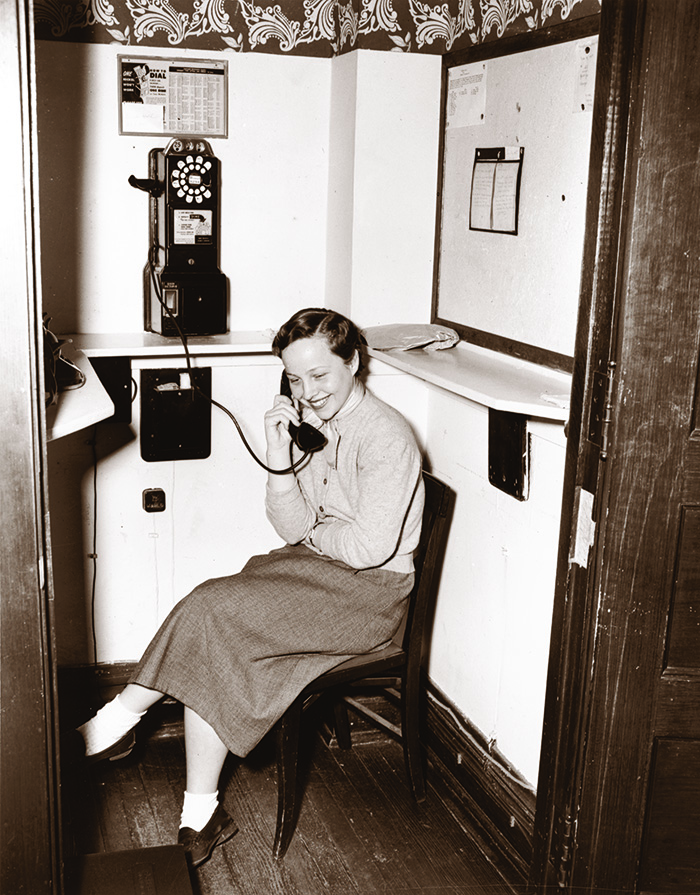 The residence hall telephone booth, a hub of everyday campus life when this 1952 photo was taken, has gone the way of bobby socks and loafers. But some things are eternal, like calling home or catching up with friends. You can always drop us a line too—either through your class correspondent or c/o Alumni News Editor at uchicago-magazine@uchicago.edu. (UChicago Photographic Archive, apf4-02941, Hanna Holborn Gray Special Collections Research Center, University of Chicago Library)

The calm before the crowds 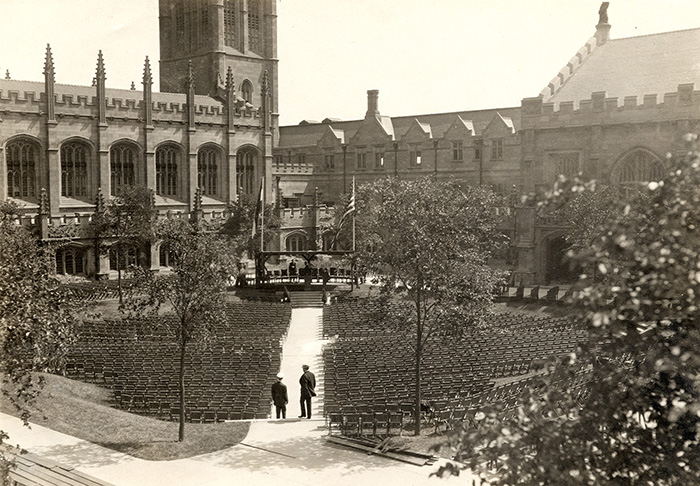 The stage is set in Hutchinson Court for the University’s 87th Convocation on June 10, 1913. Degree candidates processed to the University of Chicago Military Band’s rendition of the triumphal march from Verdi’s Aida. Dutch foreign minister to the US Jonkheer John Loudon delivered the convocation address. The Hutch Court ceremony, which culminated in an address from University president Harry Pratt Judson, marked nearly two decades since the University’s ﬁrst outdoor convocation in the summer of 1894. That open-air tradition continues this year, with the 536th Convocation taking place on the main quad on June 4. (UChicago Photographic Archive, apf3-00439, Hanna Holborn Gray Special Collections Research Center, University of Chicago Library) 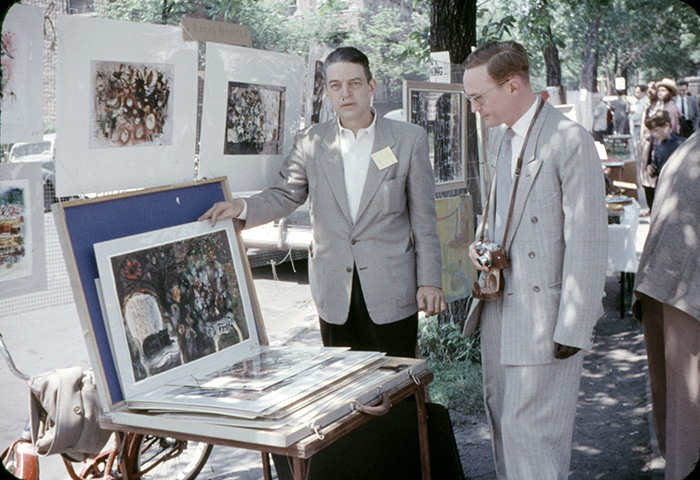 Artist Rainey Bennett, PhB’30, shows his portfolio to a prospective buyer at the 57th Street Art Fair in 1956. The painter and commercial illustrator was known during his College days for leading a jazz band, Rainey Bennett’s Syncopators, that performed regularly at campus dances and receptions. He played banjo. As an artist, Bennett made his name with a series of watercolor paintings of Venezuela commissioned in 1939 by Standard Oil Company of New Jersey and Nelson Rockefeller. By the mid-1950s, he had also established a career in Chicago as a book illustrator for Scott Foresman and other publishers. The 57th Street Art Fair, which takes place annually during the ﬁrst full weekend in June, celebrates its 75th anniversary this year. (Photography by Mildred LaDue Mead; UChicago Photographic Archive, apf2-09873, Hanna Holborn Gray Special Collections Research Center, University of Chicago Library) 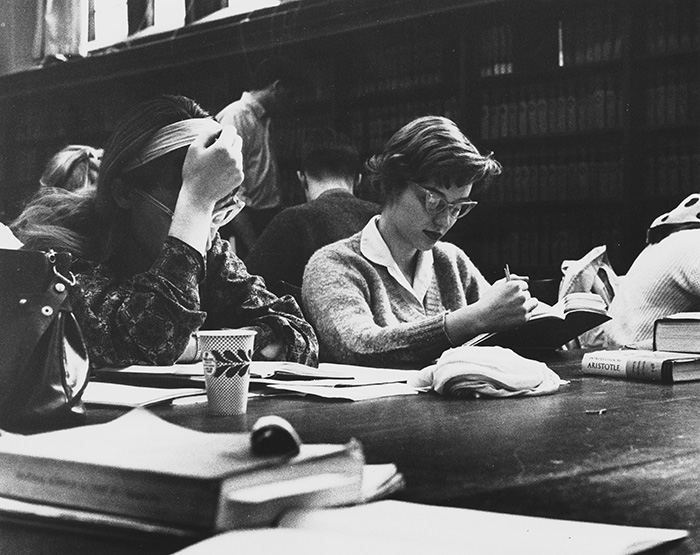 There’s no convocation exuberance without the ﬁnals week grind. With specs trained on their texts, these cat-eyed scholars made Harper Memorial Library their study space of choice. What was your go-to spot on campus when it came time to hole up and prepare for ﬁnals, and what were your most memorable ﬁnals week experiences? Write to us at uchicago-magazine@uchicago.edu. (UChicago Photographic Archive, apf4-01954, Hanna Holborn Gray Special Collections Research Center, University of Chicago Library) 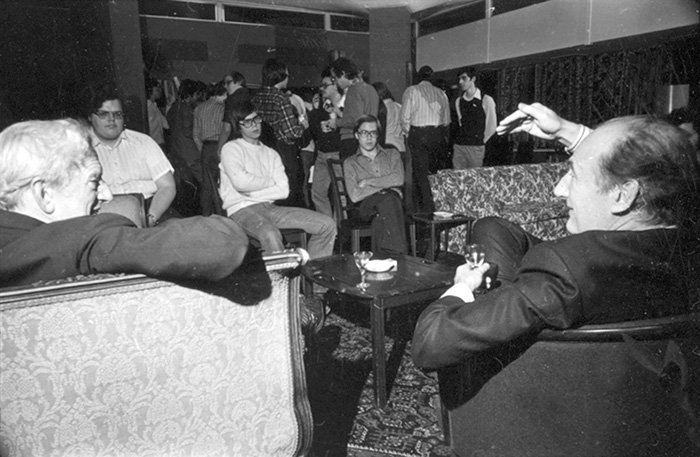 Germanic studies professor Kenneth Northcott (right), the resident master of Pierce Hall, hosts English tenor Peter Pears (left) during a 1976 student open house at the residence hall. The gathering was pictured in a University of Chicago Magazine article heralding a new era in residential life: “The dorms abound with lectures and informal seminars, musical events, and occasions for discussion with faculty members and other scholars.” What are your memories of the social and intellectual buzz at your residence hall? Did your house play host to special events or memorable speakers? Write to us at uchicago-magazine@uchicago.edu. (Photography by Myron Davis, AB’79 (Class of 1940); UChicago Photographic Archive, apf4-02898, Hanna Holborn Gray Special Collections Research Center, University of Chicago Library) 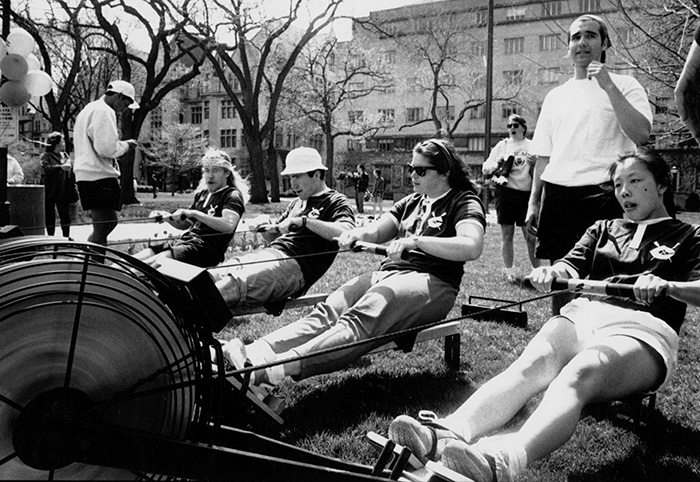 University of Chicago Crew takes advantage of springtime in Hutchinson Court to clock miles for their 1986 “ergathon” fundraiser, in which they logged 1,150 miles and raised nearly $2,800—with some rowers reaching as many as 50 miles each and the record setter hitting 100. First held the previous year, the ergathon took its name from the rowing machine (ergometer) that crew members used for land training. In the marathon, the indoor rower—a standard Concept2 model—became a tool for putting up stats and turning them into dollars: crew members secured donation-per-mile pledges from individuals and businesses, with proceeds going to buy new racing equipment and defray other operating costs. (Copyright 2022. The Chicago Maroon. Reprinted with permission. All rights reserved.) 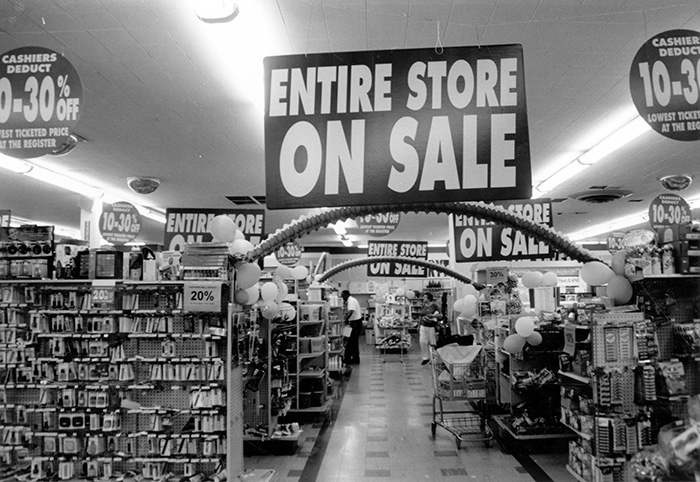 In the summer of 1997, the F. W. Woolworth Company announced plans to shutter its ﬁve-and-dime variety stores nationwide. The closing sale at the Woolworth’s in the Hyde Park Shopping Center gave locals one last chance to score deals on everyday goods before the shelves at the 55th Street and Lake Park Avenue store emptied forever that August. “The dime-store era was over,” lamented the Chicago Tribune, noting that “Woolworth’s represented a way of life in America, one in which a spool of thread sometimes shared shelf space with a plastic kazoo.” Were you a Woolworth’s patron? Do you remember shopping there for essentials or oddities, or rubbing elbows with classmates or neighbors at the lunch counter? Send us a note at uchicago-magazine@uchicago.edu. (Photography by Yong Kim, SB’00. Copyright 2022. The Chicago Maroon. Reprinted with permission. All rights reserved.)

Have photos from your UChicago days? The Magazine may be able to share them in Alumni News and in a future Snapshots. Send high-resolution scans and your memories of what the pictures are about to uchicago-magazine@uchicago.edu.