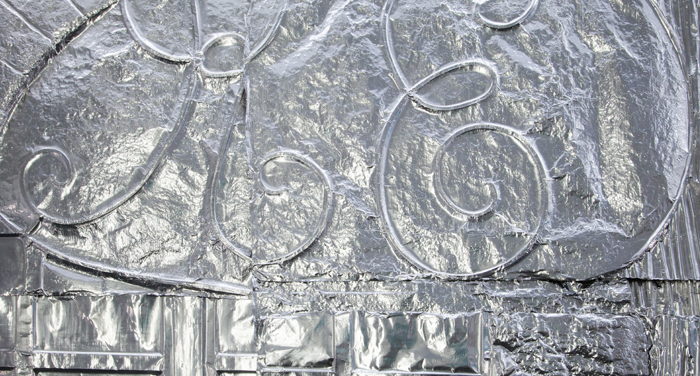 A carefully curated collection puts art and architecture in conversation.

Everyone sees something different in Harvest No. 1: it’s a sunset, a field, a ripped mattress pad. The 2014 piece by artist Liu Wei, made of foam, wood, and canvas, is one of 16 pieces of contemporary art installed in The Hong Kong Jockey Club University of Chicago Academic Complex | The University of Chicago Francis and Rose Yuen Campus in Hong Kong.

The collection was handpicked by Orianna Cacchione, a curator at the Smart Museum, and Canice Prendergast, the W. Allen Wallis Distinguished Service Professor of Economics at Chicago Booth. Cacchione and Prendergast spent about nine months identifying the artists and works they wanted to include.

They looked for both established and emerging artists from across the region—not just Hong Kong, but also mainland China, Japan, and South Asia. They wanted the works “to reflect aspects of the University of Chicago and our commitment to rigorous inquiry, and the business school,” Cacchione says. That led them to Xu Qu’s Currency Wars – Argentina Peso 10 New (2015), an abstraction based on banknote watermarks from around the world, and Kimiyo Mishima’s magazine-based collage Work 66-7A (1966), which explores information overload.

The building’s design, with its undulating silhouette, guided their choices. Cacchione liked Haegue Yang’s colorful geometric installation Dress Vehicle – Bulky Lacoste Birdy (2011; below), because she thought “the contrast of hard and soft lines would be engaging.”

Andrew Luk’s 2018 piece Chronicle Compression (top) took inspiration directly from the campus. Luk spent three days making rubbings of architectural elements from the heritage buildings, including the wrought-iron insignia of the Royal Engineers. “It’s a really interesting play of abstraction and indexing the physical space and its history,” Cacchione says.

In addition to the permanent collection, the campus has two spaces for rotating exhibitions. World War II–era Chinese woodcuts from the collection of Patricia Ebrey, AB’68, and Thomas Ebrey, SM’65, PhD’68 (curated by Josh Yiu, AB’00, and Andie Fialkoff, Class of 2019), are on view through March 31, as is a display about the literary translations of Chinese masterworks undertaken by UChicago professors David Tod Roy (1933–2016) and Anthony C. Yu, PhD’69 (1938–2015).

See also: “The View from the Tree House of Knowledge”