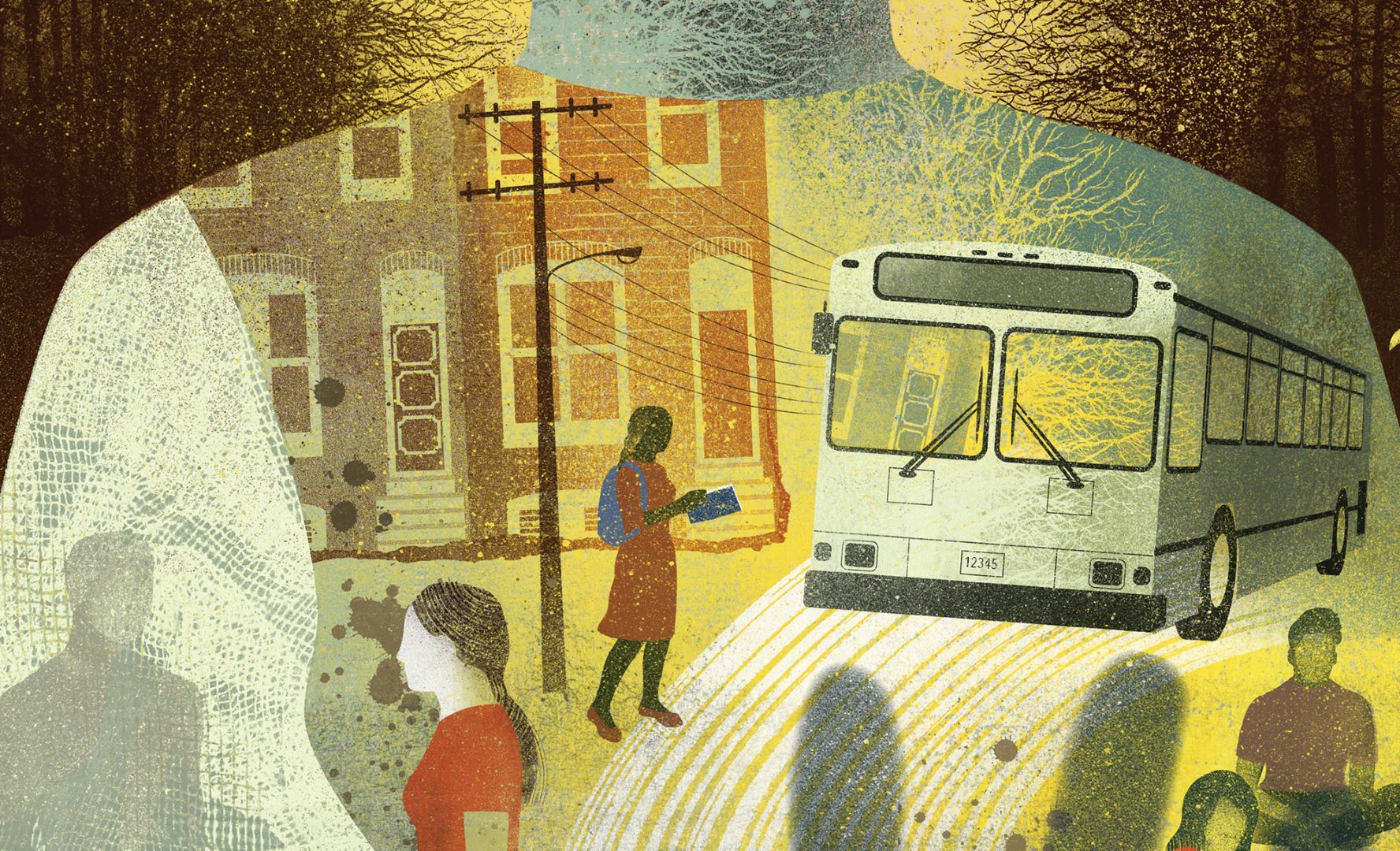 (Illustration by Anna and Elena Balbusso/Theispot)

Up and down Halsted Street

The view from a CTA bus driver’s seat took in the range of human experience—including the most heartbreaking.

By
Author
Bernard Brady, AM’83, PhD’88
|
The University of Chicago Magazine
—
Winter/19

My years as a grad student in the Divinity School’s ethics and society program in the mid-1980s were intellectually formative. The education was demanding and comprehensive. Yet for two summers during this time, I unexpectedly found myself in another “university” of Chicago. In search of a job where I could earn a bit more than my friends did stacking books in the Reg, I was hired as a CTA bus driver and thus enrolled in a street seminar on ethics and society. Halsted Street replaced Swift Hall.

I was assigned to the Limits Garage, or “barn,” on North Clark Street and usually drove north–south routes. Then and now, Chicago is one of the most segregated cities in the country. Crossing a busy street or driving beneath a viaduct often brought me into a distinct neighborhood. Most of my fellow drivers were black, as were the passengers on my bus. I was a member of the majority community going to and coming from work, but a minority at work.

The other drivers often said, “Your job is to drive that bus up and down the street and bring it back to the barn.” I got lost on Lower Wacker (too many turns, too many columns), and I got stuck on a curb on Michigan Avenue—all I could do was put the bus in reverse, blindly hoping for the best. It seemed like I brought home a story after every shift. One night on Halsted, around 35th Street just past Wendt Furniture in the heart of Bridgeport, I saw a police car responding to a call. As I approached the intersection, police cars came from all four directions, targeting the corner so fast that they crashed into each other—a scene from The Blues Brothers played out in real time.

And there were heartbreaking moments. A passenger boarded and told me, “I’m going into detox. Right now, tonight.” He said he was a Vietnam veteran. A few minutes later, our conversation was upped a notch. “They called us ‘baby killers,’” he said. I mumbled some sort of response. “We didn’t kill babies!” he said with some passion. “No, I know, you didn’t kill babies,” was all I could say.

One late afternoon near Cabrini Green, a girl with a baby in her arms boarded and asked, “Does this bus go to Children’s Hospital?” “I can drop you off about a block from the hospital,” I told her. “This is my sister’s baby,” she said. I glanced over to see that she was young, perhaps 14, more likely 12. For the rest of the short ride, the girl was quiet, and so was the baby.

I told her when we got to Fullerton and pointed toward the hospital. As she got off, I realized the baby was wrapped up head to toe. The girl carried but did not cuddle the baby. To this day, I can still feel how deep my heart sank when I realized she was bringing her sister’s dead baby to the hospital. What strength she had to do this, yet how young and vulnerable she was. In her voice and her posture, she seemed to reach out to me as I drove that crowded bus down the busy street. She too needed to be held, perhaps just with an affirming word, but that didn’t occur to me until three blocks later.

There was a popular night club just a bit south of the Chicago River. One night as I approached it, there was heavy traffic and police cars. People were in the street and all around the area. As the bus inched by, I saw a man’s body on the sidewalk. I had missed what appeared to be a murder by a few minutes. I continued my drive south. A few hours later, around three in the morning, I passed the club again. The street was empty. On the sidewalk, under the streetlight, I could see the bloodstain and the chalk outline where the man’s body once lay.

During my last month on the job, on August 9, 1985, seven young people, aged 15 to 21, were driving from Joliet, Illinois, to a Bruce Springsteen concert at Soldier Field. Heading south on South Lake Shore Drive, the driver of the car suddenly changed lanes. A No. 6 Jeffery Express, a 36,000-pound articulated bus, collided with the car and drove over the top of it. All seven passengers were pronounced dead at the scene and some 60 bus passengers were injured.

I had driven on the Drive with traffic weaving and bobbing from impulsive and excited drivers. I could have hit that car. The driver, a 25-year CTA veteran, was black. After the accident, he was charged with reckless homicide and two traffic violations, although many eyewitness reports at the scene said he was not at fault. Injured, he spent time in the hospital handcuffed to his bed. (The charges were later dropped.) To this day, I wonder if I would have been treated the same way.

I moved a lot of people up and down the street those summers—mostly people going about their daily lives without incident. Still, the U of Halsted Street taught me much, expanding my heart as much as Swift Hall expanded my mind. All those people on my buses had at least two things in common: everyone was like me and everyone was different from me in important ways. The first task of ethical reflection was for me to wrap my mind around the particulars of both.

Bernard Brady, AM’83, PhD’88, is a professor of theology at the University of St. Thomas (Minnesota). He is the author of several books and articles on justice, love, human rights, and Catholic moral theology. He has high hopes that with the publication of this article, his family and friends will finally read something he has written.