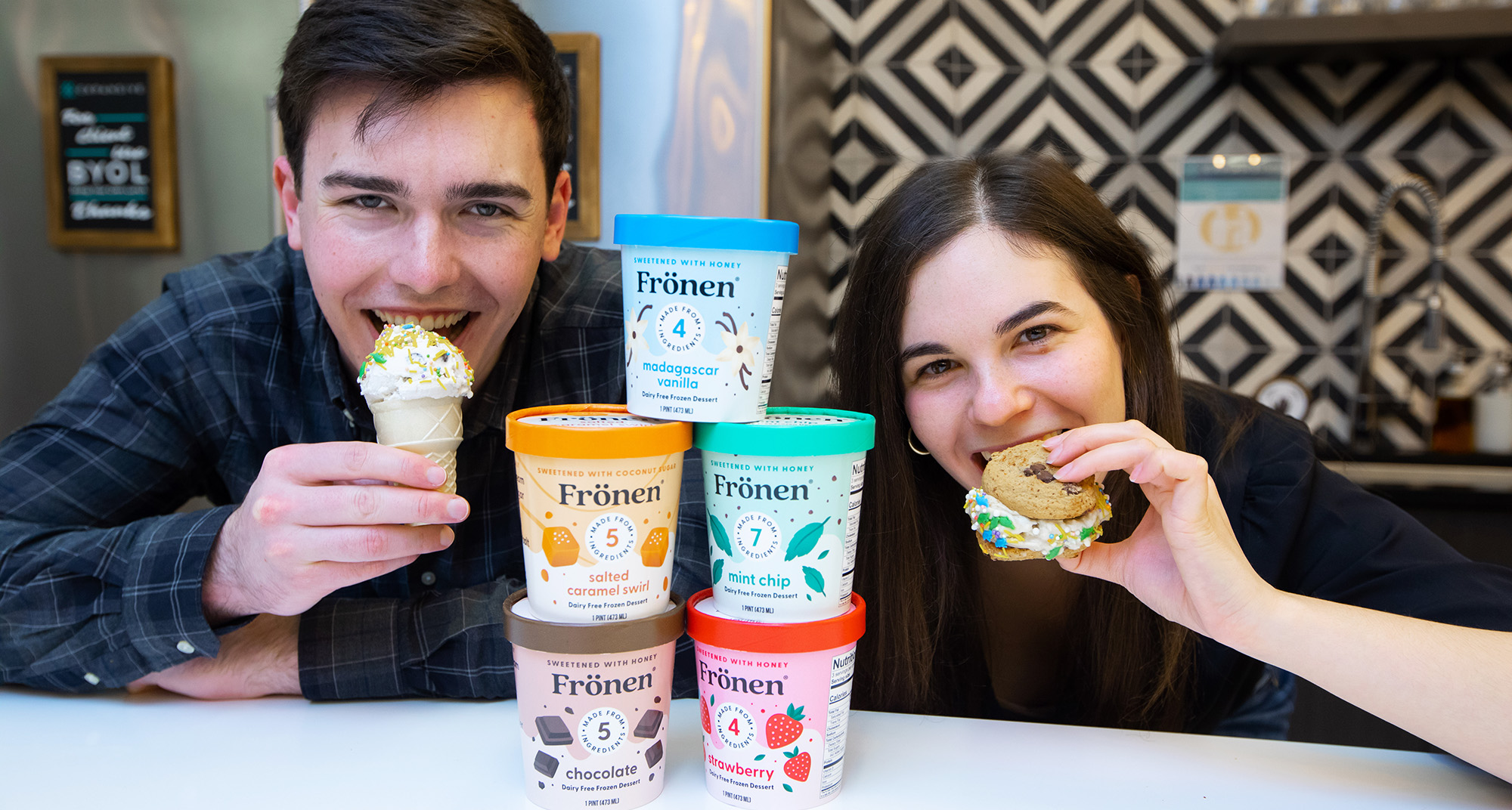 The cold, hard figures behind an alumni dessert company.

Ingredients in a pint of Frönen’s Madagascar vanilla: coconut cream, water, honey, and vanilla extract. The nondairy ice cream company, run by Jessy Gartenstein, AB’17, and Erik Nadeau, AB’18, prides itself on having minimal, simple ingredients. Most Frönen flavors have four or five; mint chip is the outlier at seven.

Age at which Gartenstein was diagnosed with celiac disease, an autoimmune disorder in which gluten damages the small intestine. She met Nadeau, a fellow public policy major, during his first year and her second at UChicago.

Ingredients in Halo Top’s vanilla bean ice cream, including milk and erythritol, a low-calorie sweetener that can cause digestive upset. In the summer of 2016, Gartenstein and Nadeau were eating Halo Top weekly—“We thought it was healthier,” she says—when both became ill. It turned out Nadeau had trouble digesting erythritol, and Gartenstein’s dairy sensitivity had flared up.

Going without a frozen treat was not an option since they are, as Gartenstein says, “kind of addicted to ice cream.” But many nondairy ice creams have gluten—in the form of malt or in the catchall “natural flavors”—or other additives. Nadeau proposed his family’s recipe: blended frozen bananas to make a creamy base for “nice cream.”

Soon they were eating it every night, making different flavors by mixing in peanut butter, honey, berries, whatever struck their fancy. They started sharing with friends. Though neither had ever considered a career in food or entrepreneurship, Gartenstein said they, along with their friend Grant Kushner, AB’17, MBA’21, decided to enter the College New Venture Challenge (CNVC) as “a fun experience that we wanted to try before we graduated.”

Pages in the business plan required for the CNVC, along with a feasibility study and two pitches to the judges. The business plan was due on Nadeau’s birthday. In true UChicago fashion, the three pulled an all-nighter in the Reg.

Dollars won in the 2017 CNVC. Since Frönen’s main ingredients were honey and bananas, the company was known at the time as BeeNana. Most of the money, which went quickly, covered various legal start-up fees, ingredients for the first research and development run, and commercial production.

Food scientists who thought their recipe was actually scalable. It’s one thing to make a dessert for a small group of people who will eat it immediately and another to make a product that will survive processing, shipping, and sitting in a freezer for weeks.

So they started tinkering. They had already changed the company name from BeeNana to Frönen: German for “to indulge.” With a name that no longer mentioned specific ingredients, they gradually phased in coconut cream and phased out bananas, creating a creamier product. They staked out a market niche of ice cream with simple ingredients.

Unexpected challenges, such as the time Frönen was preparing to launch to Mariano’s and a shipment of bananas didn’t clear customs. Or the time a truck full of product blew a tire and flipped over. The driver was fine, says Nadeau, “but all of our ice cream melted on the side of the road somewhere up in Wisconsin.”

Full-time employees: Gartenstein and Nadeau. Kushner left to work in pharmaceutical consulting before enrolling at Chicago Booth. Gartenstein oversees sales and marketing while Nadeau handles operations and finance, though they make big decisions together. But with expansion on their minds—more flavors, possibly branching out into other desserts and beyond—they are adding at least one employee.

Days a week Gartenstein and Nadeau live and work together. They still eat ice cream most days. Their favorite Frönen flavor is salted caramel swirl.

Elevate your Frönen ice cream game with a recipe for “Nice Cream” cups.