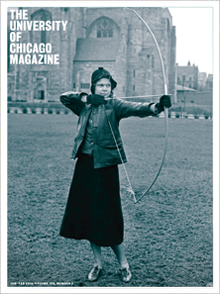 In his new book, anthropologist Russell Tuttle synthesizes decades of research to identify the characteristics that set our species apart.

An exhibit at the Oriental Institute Museum pairs modern workers with the ancient tools of their trades.

From Major League Baseball and the NBA to Italian soccer and the NFL’s foothold in China, the sports world’s executive suites have a Maroon tint.

The Magazine dashes through the snow from the Magnificent Mile to a refreshed 53rd Street.

Readers give thanks for an article about a Pilgrim researcher; react to the University architect’s campus plan; praise Divinity School dean Margaret Mitchell, AM’82, PhD’89; wrangle over Nobel-worthy research; and remember the 1963 football sit-in.

Vice president for civic engagement Derek R. B. Douglas discusses how the University and the city of Chicago work together.

Edward Tenner, AM’67, PhD’72, considers what “an informed life” means in the information age.

The listicle as literary form

Arika Okrent, PhD’04, lists the reasons why the listicle is a popular literary form.

The critical success of the drama Fruitvale Station gives an aspiring producer’s career a boost.

Once a favored Soviet leisure spot, Sochi tries to transform ­itself for the Olympics.

A Divinity School alumnus keeps ethical conduct front and center at his company.

Words to live by

Dana Suskind leads an initiative to improve parental communication, a key factor in a child’s success.

The voluminous University of Chicago Library, by the numbers.

Nearly half of young people report experiencing online abuse—and they're changing the way they respond.

“A certain messiness” marked the halting evolution of racist imagery in the decades after slavery’s abolition.

A bacterium pits the immune system against itself, the divergent genetics of assocated diseases, labor’s shrinking piece of the pie, and how place influences transgender acceptance.

The New Year is under way, but it’s never too late to add a few good resolutions.