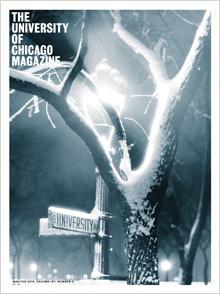 A law professor offers an inside look at his experience on a presidential panel reviewing how the government protects national security and preserves civil liberties.

With a string of headline gifts since its public launch, the UChicago Campaign is gathering momentum.

At the University in the 1960s, Bernie Sanders, AB’64, set out on a path that led to the Senate, and an unlikely place at the center.

The president of the American College of Cardiology advocates a plant-based diet as part of shifting heart disease treatment from “event” to “prevent” focused.

Seeing Robie House—and all of campus—anew.

Readers weigh in on World War I art; a rare honor for Robert Morrissey, PhD’82; the problems that have befallen Gary, Indiana; the effect of immigration enforcement on children arriving from Central America; the benefits of online education; a UChicago championship ski team; and more.

Chicago Harris dean Daniel Diermeier discusses the emergence of data-driven public policy and the training necessary for the next generation of leaders.

In a European civilization course at the Center in Paris, Philippe Desan deciphers layers of meaning.

Dylan Walsh, AB’05, reflects on the full life his uncle lived with a transplanted kidney.

Two decades of planning by the Fermi Institute’s Tom Economou culminate in a comet landing.

Lawrence Lessig inaugurates the Berlin Family Lectures with a study of institutional corruption.

Doulas can make an important difference for young, low-income mothers and their babies.

The harmonic convergence of mathematics and music.

A sense of mortality

Underappreciated—but, it turns out, important—the olfactory system issues an SOS.

Scientists have been at sea about how to extract uranium from the oceans, but a PhD student’s method shows promise.

New Seminary Co-op director Jeff Deutsch talks about his life in books and the future of the ­beloved store.

Disrupting cancer-cell division, buzz as an economic commodity, surgery that relieves apnea and asthma, and a STING operation to fight disease.

An appreciation of Harry, Sally, and all the things they said.