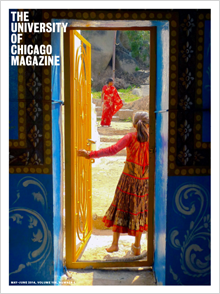 A new home in India deepens the University’s historic academic connections to the country and concentrates its expertise on complex global problems.

What to make of it

Poet, critic, and scholar Maureen McLane, PhD’97, argues for poetry that synthesizes, “with passion and knowledge,” what it means to be human. Plus—Three poems: An excerpt from This Blue.

The annual reminder of the UChicago alumni state of mind.

I sailed the ocean blue

Benjamin Recchie, AB’03, is the very model of a modern Gilbert and Sullivan Savoyaire.

Kenneth Burns, AB’93, AM’03, finds the South welcoming to him and his partner.

A Gleacher Center conference argues for better use of data in public policy.

In Missouri and southern Italy, Jason Pine, AB’90, delves into lives on the margin of criminality.

A life in focus

Two UChicagoans bring diversity to science and engineering, with the help of a bright green truck.

The Center for Care and Discovery and its state-of-the-art stats.

Turned back toward Earth, a new telescope in space will search for the origin of high-energy cosmic rays.

Autism shows a correlation to environmental toxins, the adipose fin may not be so vestigial after all, economists revisit the effects of an early-childhood program 49 years later, and an ancient weather report gets a new translation.

An interactive online feature invites you to create your own palette and paint a fanciful scene that’s all Maroon.