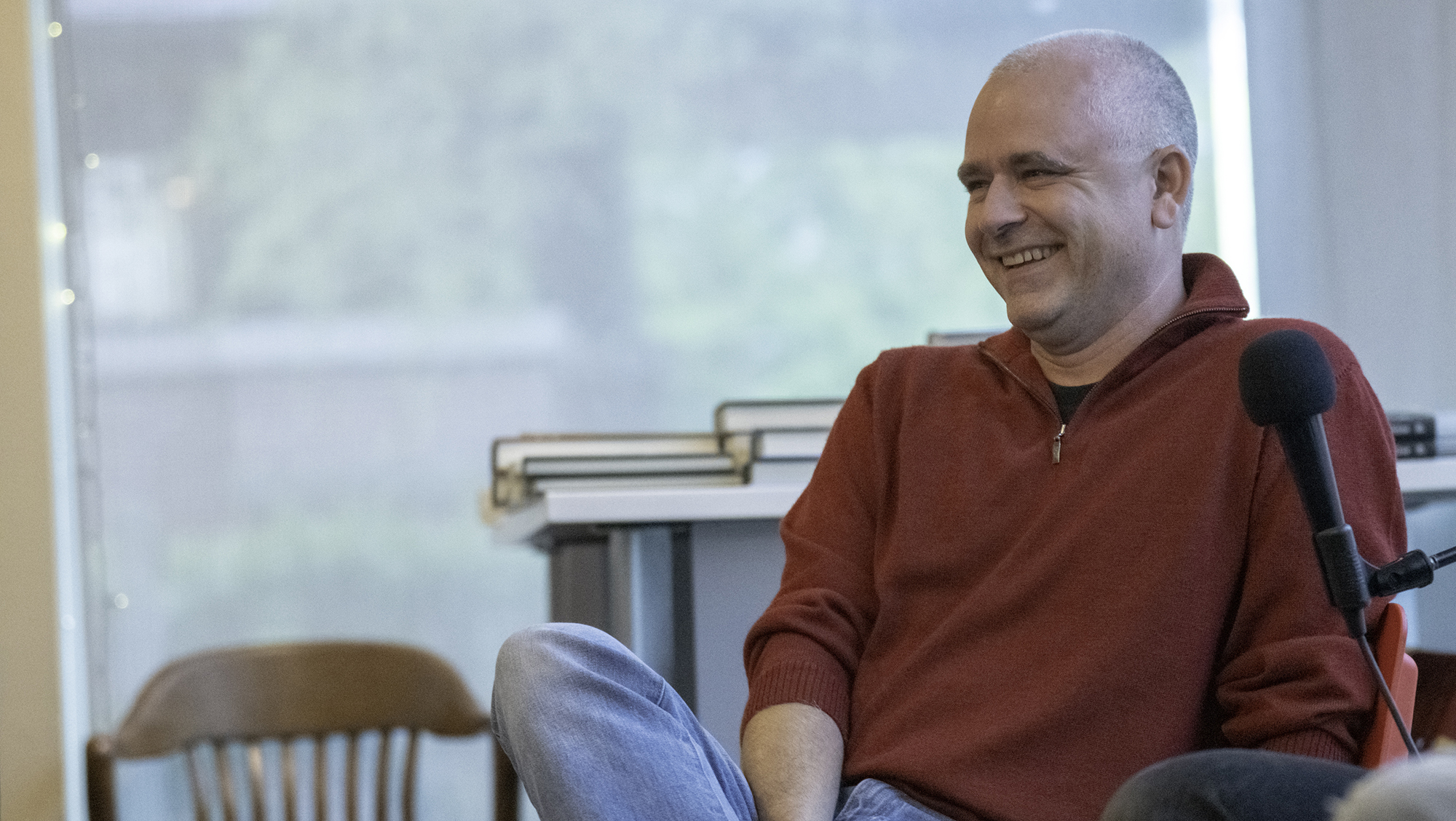 Fred Niell, AB’99, at the Seminary Co-Op in May 2019 for the launch of We Made Uranium! And Other True Stories from the University of Chicago’s Extraordinary Scavenger Hunt (University of Chicago Press, 2019), to which he contributed an essay. (Photography by Nathan Keay)

Physicist with a wrench

Fred Niell, AB’99, helped build a nuclear reactor in a dorm room. Did he ever make anything else?

Twenty years ago, physics majors Fred Niell, AB’99, and Justin Kasper, AB’99, became campus legends when they built a working breeder nuclear reactor for the 1999 Scav Hunt. (The Scav item was inspired by a 1998 Harper’s article, “The Radioactive Boy Scout,” about a Michigan teenager who tried the same thing with less happy results.)

Niell and Kasper created the reactor from junk they found in their physics labs and dorm rooms. “It’s kind of scary how easy it was to do,” Niell told the New York Times at the time. Kasper, a University of Michigan professor, now makes parts for NASA, while Niell runs consulting firm Nielltronix.

During Scav 2019, Niell was in Hyde Park for a launch event for the book We Made Uranium! And Other True Stories from the University of Chicago’s Extraordinary Scavenger Hunt (University of Chicago Press, 2019), edited by Leila Sales, AB’06. Afterward Niell told the Core about other projects he’s worked on—including a cyclotron, a “bridge” across the Midway, and an update to the Navy’s extremely low frequency radio system.

Read an excerpt from We Made Uranium!

First of all, how dangerous was this breeder reactor?

Why are you wearing radiation suits?

That was just theater.

When you were a junior in high school, you built a cyclotron.

I was always the kid doing science fair projects. In eighth or ninth grade, they started edging into dangerous. Each year I would win some money, which became seed money for next year’s project.

I did actually build a working cyclotron out of parts from scrapyards. It was about 2,000 pounds and the size of a bookcase, three by four by two feet, roughly. It required a lot of electricity. It sounds scary, but the levels of radiation involved were less than a dental X-ray. I ended up winning the International Science and Engineering Fair in 1994.

Why go to UChicago, rather than a school that offered engineering?

I like to say I play an engineer on TV. The math is all the same.

The type of engineering that I do—high power, esoteric electrical engineering—is just physics with a wrench.

Did your Scav teammates know you’d made a cyclotron?

They did not. I write about this in the book: Justin and I had commandeered a lab where we built a pulse power system, which was basically a destructotron. Its only practical use was blowing stuff up.

Justin had delayed his art requirement until the final quarter of his fourth year. We used that as an excuse. When things blow up, light comes from the explosion, and if you’re doing it in full darkness, you can get a really beautiful photograph. I believe he got an A.

So our reputation got around as people who could get stuff done that was impossible and crazy and involved physics.

It sounds like the nuclear reactor laid the groundwork for your entire career.

You have no idea.

I finally broke down and stuck it on my résumé in 2009. Before that, Popular Science magazine had it as the No. 3 college prank in history. That one article ended up getting me so many jobs.

In an earlier Scav, you built a bridge across the Midway.

We took “bridge” in the loosest possible sense. I do a lot of mountain climbing, and my dad and I ran a climbing gym at my high school, so we had a lot of rope. I called him up and asked him to please FedEx some rope.

The Midway is 350 feet from one side to the other and has some pretty stout trees. We strung a rope from one stout tree to another. You need a lot of tension on the rope to support a person’s weight at the center of 350 feet. So we set up a pulley on one side and attached it to the bumper of my car.

I had a guy attach himself to the middle of the rope, and I drove forward until he lifted up off the ground. That was our bridge. And it worked. We went hand over hand across the Midway without touching the ground.

More recently, you were selling Nixie clocks on eBay and Amazon.

During graduate school [at the University of Michigan], around 2002, I read an article in IEEE Spectrum magazine—the industry rag for electrical engineers—about how Nixie tubes were coming back. Nixie tubes came about in the ’50s, and were used in computers and lab equipment until the early ’70s in the US, when they were fully displaced by newer technologies like light-emitting diodes. In the USSR they did not have LEDs.

I found some shady source in Ukraine for some Nixie tubes, bought them, and made 24 clocks. They sold out in about a month.

In 2009 they were still really popular. I thought, ok, now’s the time. I bought 1,000 tubes from a manufacturer in Czechoslovakia, designed the circuit boards, did the programming, built them, and put together a very Web 1.0 web page. A friend suggested that I send it to Boing Boing.

Boing Boing said cool, but not really our thing. Then at 9 a.m. the next day one of the guys said, “Dude, you’re on the front page of Engadget.” Within eight hours, I sold out.

I’ve been doing small projects like that professionally for a long time. Since 2009, when I first started my company, I’ve been doing short-run custom electronics, usually prototypes for various industries—defense, semiconductors. Most of that work is not commercial. It’s stuff you see in a lab or bolted to a tank.

Give me an example.

I helped upgrade the extremely low frequency radio transmitters that the Navy uses to communicate with submarines.

Communicating with submarines is tough, because radio doesn’t really transmit through sea water, and submarines don’t want to give away their location by putting an antenna up. In the 1950s, the Navy developed a technology based on something that the Germans were working on in WWII: extremely low frequency radio, like 20 kilohertz. Broadcast is in megahertz—hundreds of megahertz.

These are fully one-way communication. It is the doomsday method of communicating to submarines, “It’s time to launch.” A submarine doesn’t have any way to say, “What?”

But these transmitters have a fundamental limitation in their performance that we’ve known about since the ’50s but haven’t had the technology to get around. I wrote a proposal to the Navy a few years ago and it got funded.

What’s the weakness? Can you explain it simply?

I can. Let me think.

The communication rate—the number of characters you can send per minute—is very low. If you want to send anything faster, you can’t really do that with the antennas they have. So you have to do some magic in the transmitter, which drives the antenna.

That magic requires some very tricky stuff. It boils down to creating an electronic switch that’s capable of switching tens of megawatts of power in submicrosecond speeds. That technology didn’t exist in the ’50s, but it exists now, and is bolted to some transmitters because of the work I did.

Any future projects? Are you going to save us from climate change?

I have clients right now that are working on clean water technology—point-of-use water systems to purify and sanitize water for developing countries.

I’ve worked for the military for a lot of my career because they pay well and have crazy projects. But building better guns is a moral gray area. I’m glad that I did it, but I’m also glad that I’m helping build irrigation systems in developing countries.

Read more in “The Homemade Breeder Reactor” from the Summer/19 Core.